This is the third in this year’s series of posts by students on the job market.

Think about buying a perishable good with transaction costs. For instance, shopping for strawberries early in the pandemic when grocery stores had long lines. Consumers faced with this trade-off have two options. One is to make bulk purchases, which lower total transaction costs but lead to waste when the good expires. Shopping for two weeks’ worth of groceries cuts down on the time spent in line but leads to some rotten strawberries. The alternative is making small, frequent purchases, which limit waste but impose a high burden of transaction costs: fresh strawberries every few days, but a lot of time standing in line. This trade-off is not ideal for anyone, but consumers with little liquidity may not be able to buy in bulk even if they want to. Liquidity constraints push consumers toward small, frequent purchases even when transaction costs are high.

In my job-market paper, I study the relationship between waste, liquidity, and transaction costs using a randomized control trial with pay as you go (PAYGo) solar in rural Rwanda. PAYGo solar is an ideal good to study because it is strictly non-storable and involves substantial transaction costs for rural consumers. Consumers of PAYGo solar make a small down payment to have a solar home system installed. Then they ``pay as they go'' to use the electricity their system generates by purchasing access time with mobile money. Basic systems include light bulbs and phone chargers while larger systems may include radios and televisions. The more appliances, the higher the price of access time. Once bought, access time runs down continuously. A consumer cannot save it for later, and they cannot delay the start of the continuous rundown.

Consumers face transaction costs in the form of time: the average consumer in my sample travels fifty minutes, one way, to reach the nearest mobile money agent. A 2018 report by the World Bank documents that only 31.1% of adults in Rwanda have mobile money accounts. Relatively low mobile money penetration means that many consumers only use it to pay for solar.

I partner with a PAYGo solar provider to randomly offer a line of credit for solar access time to 2,000 existing customers who live in rural Rwanda (control = 9,360). Most are farmers, but they tend to be slightly wealthier than the average rural household. The credit reduces any short-term liquidity constraints consumers may be facing by allowing them to borrow up to fourteen days of access time. It also lowers transaction costs for consumers who use it: consumers simply call to borrow instead of traveling to buy access time. Both attributes alleviate the trade-offs that consumers typically make.

Consumers Respond to the Line of Credit in Vastly Different Ways

Figure 1 shows average treatment effects for consumers with different levels of pre-experimental demand. My measure of demand is the monthly utilization rate: the proportion of time each month that a consumer purchases access to electricity. 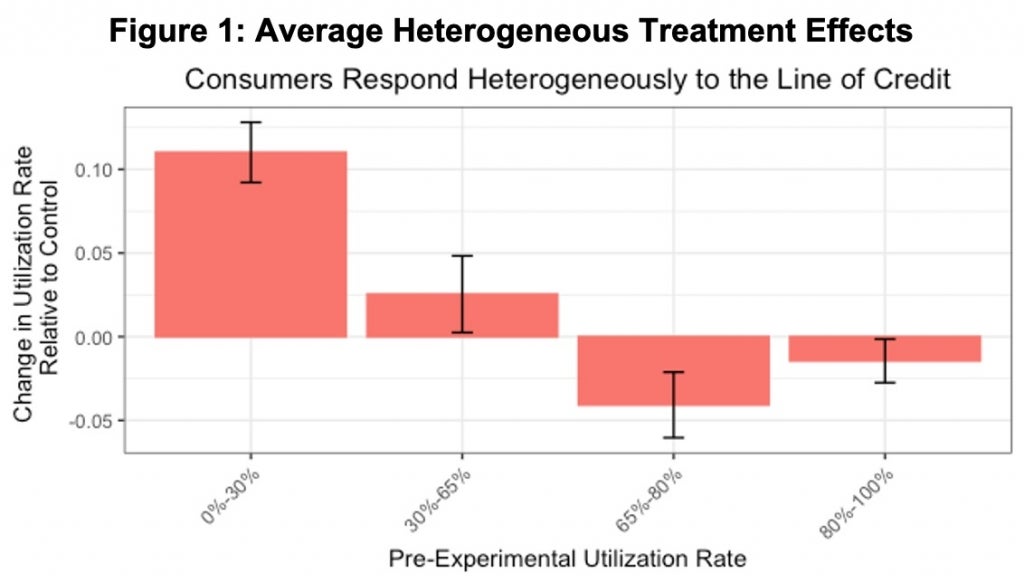 How can credit lead to such different effects? To better understand how the line of credit changes consumer behavior, I consider two additional empirical findings.

Why are high treatment effects concentrated among those with the lowest demand? I ask whether my results could be driven only by consumers who actually borrow. Among consumers with the lowest pre-experimental demand, only 4.5% use the line of credit. If the entire 11pp increase is driven only by borrowers, it implies that they each increased their utilization rate by over 200pp, an impossibly large effect. It follows that some low-demand consumers are changing their behavior in response to being offered the line of credit even when they don’t end up using it.

The idea that guaranteeing access to credit can change behavior is not new. Deaton (1991) first showed this theoretically, and Lane (2020) shows how this happens in practice in Bangladesh. The intuition is that liquidity constrained consumers facing uncertainty in income create a buffer stock of savings for times when their income is low. The need to maintain a buffer stock limits consumption even when income is high to protect against the risk of low income in the future. Providing guaranteed access to credit gives consumers another tool to cope with risk. Consumers don’t have to save as much to protect against periods of low income because they know that they can borrow if necessary.

My results suggest that alleviating liquidity constraints is critical for consumers with the lowest pre-experimental demand. This squares with their self-reported low access to credit and small purchase sizes.

Does Lowering Transaction Costs Eliminate Waste for Some Consumers?

What about the consumers with high pre-experimental demand, who reduce utilization in response to being offered the line of credit? I suspect that these consumers are using the line of credit to more precisely target their purchases, reducing waste. Waste occurs when a consumer has prepaid for electricity access but gains little benefit from it. For instance, a consumer may value electricity during the week but have little use for it on the weekends when they are away from home. When transaction costs are high, it may be worthwhile to pay for two weeks of access even though weekend time will go to waste. With the line of credit, consumers can instead pay for five days, skip the weekend, then borrow five days and pay it back the next time they visit the mobile money agent. This eliminates the wasteful part of their consumption without increasing transaction costs.

I test my theory using data generated by the solar home systems. I observe the number of watt hours (wH) actually consumed on days when systems are switched on, which I use as a proxy for the benefits gained from electricity access. Consumers with high variation in wH consumed are the most likely to have wasteful consumption: sometimes they use almost no electricity and other times they use the full capacity of their system. By contrast, consumers with roughly constant usage likely experience little waste.

I compute the standard deviation of wH used in the 90 days prior to the experiment for each consumer. I divide the resulting distribution of standard deviations into quartiles and estimate average treatment effects for each quartile. Figure 2 shows that consumers with the least variation in wH used have significantly higher treatment effects than consumers with the most variation in wH used: effects on the left of the figure are higher than those on the right. This supports the notion that reductions in demand come from consumers reducing waste when transaction costs are lower. 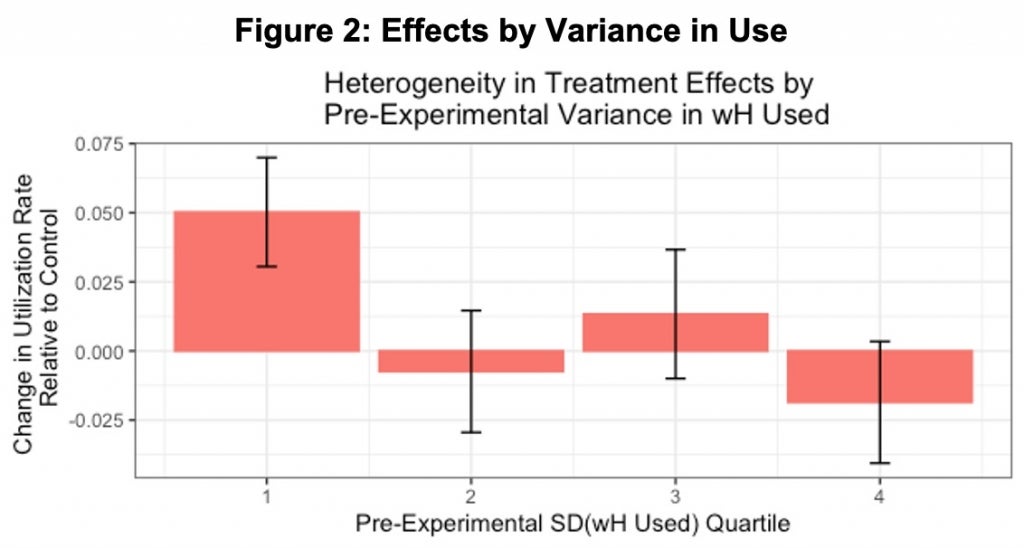 My paper shows that transaction costs for perishable goods limit demand among consumers not buying in bulk and cause wasteful consumption among those who can buy in bulk. Unfortunately, offering the line of credit is not profitable for the firm. Reductions in demand among consumers eliminating waste outweigh increases in demand from liquidity constrained consumers. As PAYGo services evolve, firms may use more sophisticated contracts that better align profits with consumer incentives. More generally, my work highlights that investments designed to lower transaction costs have the potential to dramatically increase consumer welfare, particularly for rural, low-income communities.

Megan Lang is a PhD student at UC Berkeley.