We know socio-emotional skills are important – How do we develop them? A review of Paul Tough’s Helping Children Succeed 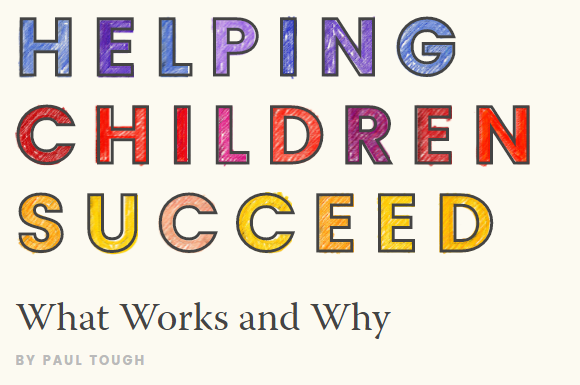 In 2012, Paul Tough published How Children Succeed: Grit, Curiosity, and the Hidden Power of Character, in which he highlighted how children who develop “noncognitive capacities” like self-control and perseverance do much better in adulthood. But as he spoke on that book, audiences repeatedly confronted him with the question: “Ok, now that we know this, what do we do?” So he wrote another book to answer that question – Helping Children Succeed: What Works and Why.

While Tough follows a familiar pattern for popular social science books – accessibly summarize social science research and accompany it with stories – he does it well, and he explicitly seeks not to highlight great programs as specific models to scale up, but rather “as expressions of certain underlying ideas and strategies.” To an economist, this evokes Ludwig et al.’s work on Mechanism Experiments and Policy Evaluations: Don’t just evaluate programs; evaluate mechanisms that we can apply to a wider range of programs. Tough relies on a wide range of studies, including lots of randomized trials, and the study dates consistently extend well into 2016.

So “what works and why”?

It’s not about teaching; it’s about creating an environment. Tough makes the argument that many of the best examples we have of individuals who seem to help youth develop noncognitive skills “never said a word about these skills in the classroom.” Add to that the stress literature from early childhood (here and here, for example), demonstrating how children exposed to more traumatic events have a wide array of adverse physical and psychological outcomes later in life. And for older children, bring in the evidence that high rates of suspensions from school adversely affect not only the children suspended but also those left behind. He ultimately concludes that noncognitive capacities are “products of a child’s environment,” which means we can’t teach them the same way we teach math and reading.

What classes of programs seem to create this environment? I know that mechanisms were promised earlier. Tough stops short of giving cut-and-dried conclusions, which I suspect is fair given the state of the research. But he does a great job of highlighting an array of programs in a category, rather than a single example to take to scale.

2. Early childhood programs outside the home that provide a “plenty of responsive, warm, serve-and-return interaction with caring adults.” Examples are Educare – which has an ongoing randomized trial but positive preliminary results, All Our Kin – which also rates well in a recent evaluation (March 2016!), and the Chicago School Readiness Project, with cluster randomized trial evidence of success in child development outcomes.

4. Classrooms that create a “positive emotional climate,” show “sensitivity to student needs for autonomy,” and – in addition to that environment – “a pedagogical approach that promoted student engagement in the learning process.”

How do you measure success in developing these noncognitive abilities? In David McKenzie’s review of the recent book Grit, he highlights the measurement challenges self-reported or teacher-reported noncognitive abilities. Tough instead turns to Kirabo Jackson’s work (May 2016!), where four pieces of school administrative data stand in for noncognitive ability: school attendance, suspensions, timely grade progression, and grade point average. One can argue about whether these capture noncognitive abilities, but Jackson shows – in North Carolina – that these measures predict college attendance, future wages, and future arrests better than test scores. He’s also able to construct a value-added measure, showing that some teachers are consistently better at improving these “noncognitive outcomes.” As Tough concludes, “Instead of laboring to come up with a perfectly calibrated new measurement tool for grit or self-control or self-efficacy, we can measure noncognitive capacities by measuring the positive outcomes that we know those capacities contribute to.”

Reactions as a Development Economist
Overall, I found this book a pleasure to listen to and then (partly) read. Here are a few reactions:

1. Almost all of this evidence is U.S.-based. How relevant is it for low- and middle-income countries (LAMICs)? A common critique in development is that rich-country consultants bring their rich-country solutions that fail dramatically (sometimes comically; sometimes tragically) in local contexts. That’s an important principle. At the same time, as I read review after review of what works to improve learning in low- and middle-income countries, I wonder if we’re missing something by not drawing on evidence from rich countries. This is where I think Tough’s emphasis on mechanisms is useful. It doesn’t make sense to drop a program from Chicago into Lomé, but I suspect that when we lack good, local evidence, rich-country evidence can give good suggestions on where to start.

2. Where does a book like this fall in the synthesis literature? I’ve written and spoken before about different kinds of synthesis, ranging from narrative reviews to meta-analysis. Of course, most non-specialists won’t read technical reviews. Instead, they’ll read books like this. This is fundamentally a narrative review, with the addition of rich qualitative work. The qualitative work, providing a clear picture of how programs actually work, is an improvement on many quantitative reviews.
Here’s what troubled me: Most of the evidence in the book fed into a single narrative. I found myself thinking: Are there studies that muddy the narrative that weren’t included? In my own work, I’ve seen that the variation in effectiveness within classes of programs can often be at least as high as the variation across classes of programs.

Tough has really innovated here, with a slim, accessible book accompanied by a host of on-line resources. I don’t object to a narrative, but I’ll propose an addition for future work. Technical readers would benefit from an online appendix that characterizes the universe of studies that Tough reviewed, which studies don’t fit the narrative, and why they didn’t make it into the book.

How should you consume this book? The hardcover book – coming in at a clean 114 pages – is beautiful but has no references and no figures (just, you know, words); so it’s great for getting the argument but insufficient for a reader who wants to know exactly which studies are driving the conclusions. The audiobook – which I listened to, and is narrated well by Tough – has the same advantage (easy!) and disadvantage (sources!).
Tough has also provided a free version on-line, complete with blog-style links to sources, relevant charts, figures, and videos. (It’s pretty cool.) I’ve drawn on that heavily for this post. You can download a PDF.

David, nice review. Two questions:
1) What does success ("doing much better in adulthood") look like? Meaning is this considered in terms of job 9yes/no or job quality), in terms of university degree, in terms of salary? Once could define success as happiness as well, and there are many definition of that. So from your point of view, if you had to correlate the programs talked about in your blog with success, which definition of success would you use?
2) What would be your advice regarding finding similar evidence of correlation between programs targeted at older youth (secondary and tertiary education age) which bet on developing "soft skills" such as conflict management, purpose definition, career planning, leadership, soft business skills, civic engagement, etc. and the employability or social integration of these youth?
Thanks,
Benjamin Herzberg

Thank you, Benjamin. In this case, much better in adulthood is shorthand for a range of outcomes. The specific outcomes depend on the study, but they include higher income, higher employment, fewer arrests, more likely to have completed tertiary education, etc. Of course, it's hard to define success, but income and employment are, I believe, useful summary indicators. (Employment in particular is highly correlated with happiness in happiness research.)
On programs for older youth, I haven't seen as much evidence. That doesn't mean it doesn't exist; I just haven't found it. My intuition would be that it's harder to develop those soft skills the older you get, but my intuition would also be that it is still possible to change those skills and observe returns. We do see, for example, evidence that conflict leads to greater cooperation. Of course, no one would recommend conflict, but it provides evidence that socioemotional behaviors and engagement can be changed, hopefully by less traumatic processes. I look forward to seeing more impact evaluations around this.