When I talk to people about impact evaluation results, I often get two reactions:

A recent paper – “Cognitive science in the field: A preschool intervention durably enhances intuitive but not formal mathematics” – by Dillon et al., provides answers to both of these, as well as giving new insights into the design of effective early child education.

The background. Preschool has positive impacts. Experts say that quality really matters. Efforts to improve quality in Malawi and Chile have not shown impacts on child development when tested with randomized-controlled trials. There is an association between child development outcomes and preschool quality (as in Brazil), but that could easily be driven by – say – richer households living in areas with higher quality preschools and also providing lots of other investments in their children.) So how do we make preschool better?

Children begin to develop basic numeric abilities from very early ages: judging more versus less, for example (“Hey, my sister got more than me!”). These are largely “nonsymbolic” (guessing which shape doesn’t belong or comparing sizes). Later, they learn “symbolic” math (such as that 5 is bigger than 3, even if they’re the same font size). Researchers believe that (a) children can get better at nonsymbolic math through exercises, and (b) getting better at nonsymbolic math will help them get better at symbolic math. There is some evidence on the latter (here and here, for example), but it tends to be short term (with the final measurement taking place less than a month after the end of training).

The experiment. The team worked with the Indian organization Pratham in 214 preschools in Delhi, India. Preschools were divided into three groups. The Math Games group played math games for three 1-hour sessions per week over 4 months. The math games focused on nonsymbolic abilities, like the one in the image below. 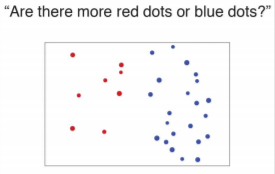 The Social Games group played similarly engaging games for a similar amount of time, but the games focused on “emotion reading and gaze following.” The Control schools (and the treatment schools when not playing the games) used a preschool curriculum designed by Pratham. So comparing the Social Games to the Control tells us whether just playing games improves math ability, and comparing the Math Games to the Social Games tells us whether the content of the nonsymbolic math games improves math ability. Children were evaluated before the intervention, and then three times afterward (from 0-3 months after the intervention up to 12-15 months after the intervention). The paper describes the games in more detail, and the supplementary materials describe the games and testing in MUCH more detail.

In the subsequent follow-ups, two things changed. The impact of the Social Games on any math ability disappeared. But also, the impact of the Math Games on symbolic math ability disappeared. So kids were still better at the kinds of activities that were in the Math Games, but that no longer translated into the kind of math that you want kids to learn in school. 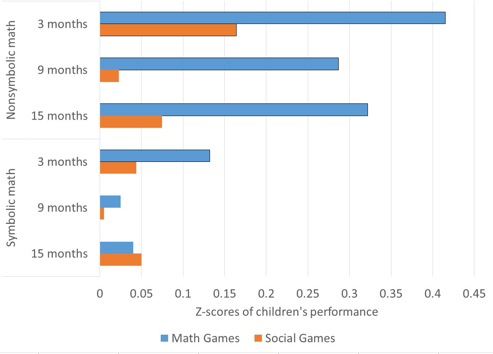 Source: My construction, based on Dillon et al. 2017

So, the verdict from a field experiment with at longer follow-up on the two hypotheses?

The authors propose two potential improvements for the future: To be tested!

What this tells us about impact evaluation. Let’s go back to those two earlier responses to impact evaluation results. More and more impact evaluations are of programs implemented at scale by existing government systems, and that’s an improvement. But this study highlights the enduring value of pilots. When something doesn’t work as a pilot – and I’m defining “doesn’t work” here in terms of the longer term mathematical ability as tested in school – then we should be glad that we didn’t invest in implementing it at scale. A program that doesn’t deliver desired results in a well-managed pilot is unlikely to then deliver those results at scale. Obviously, moving positive results from an NGO pilot into government systems has challenges – as Pratham has observed and I’ve written about before – but knowing that the intervention works when implemented well makes it much easier to figure out why it’s not working when implemented at scale. In this case, yes. The hypotheses tested in this study had been confirmed in laboratory studies, and they had even been confirmed in field studies of short duration. And yet, they did not persist. In general, I’d propose that we usually know less than we think we know.

Not every impact evaluation result is surprising, but it requires evaluating a wide range of interventions – and we use theory to guide which interventions within that range – to figure out which results will be surprisingly overturned. Surprising results, whether negative (Training high schools in active teaching pedagogies reduced student learning!) or positive (Providing bicycles improves test scores!), come together with unsurprising results (Throwing laptops into schools doesn’t improve student learning!). And one policy maker’s surprising result is another’s yawn-inducing “duh!” moment, depending on their prior beliefs.

I’ll give the last word to the authors: “Our findings underscore both the promise and the necessity of rigorous testing of reforms to school curricula inspired by basic science, using scalable programs over extended time frames in the environments in which those curricula will be implemented.”