Why did the farmer cross the road? To bridge the productivity divide: Guest Post by Sam Asher

This is the sixth in our series of posts by students on the job market this year.
The productivity of workers in agriculture is generally much lower than in other sectors of the economy (Gollin, Lagakos and Waugh, 2014). This is particularly true in low-income countries, yet these countries generally have the highest shares of the population living in rural areas and working in agriculture (McMillan et al, 2014). So why don’t workers switch jobs into higher productivity (and better paid) occupations? Development economists as far back as Lewis (1954) and Sen (1966) have studied the labor market imperfections that may keep workers in low productivity agriculture despite higher wages elsewhere.

In my job market paper, my coauthor Paul Novosad and I focus on one particular friction: the poor state of transportation infrastructure in low-income countries.  In the absence of paved roads, the high costs of moving people and goods in rural areas may mean that it is not profitable for workers to leave agriculture, even when agricultural profits and wages are extremely low. To test this hypothesis, we estimate the impact of India’s flagship rural road construction program that has built paved roads to over 100,000 previously unconnected villages since it began in 2000. We find that paved road connectivity leads to a large movement of village labor out of agriculture and into wage labor markets. These effects are found only in villages close to major cities, suggesting the role of urban centers in driving the transformation of rural economies. Instead of leading to the growth of nonfarm businesses in treated villages, road construction appears to facilitate the participation of rural inhabitants in external labor markets.

Overcoming endogeneity of road placement and the scarcity of village-level data
As with all impact evaluations, this paper relies on both exogenous variation in treatment (road construction) and data that capture the outcomes of interest. Unlike randomized controlled trials (RCTs), we rely on program rules for our source of variation and data collected by the Indian government for our outcomes. For both political and economic reasons, it is generally infeasible to randomize road construction. We thus rely on a natural experiment: program guidelines prioritize construction of roads to villages of population 1000+, then villages of population 500-999, then villages under 500. This creates discontinuous jumps in the probability of road construction by the timing of our endline data, which we exploit using a fuzzy regression discontinuity design. The main outcome variables come from the Indian Socioeconomic and Caste Census. We downloaded over 50 terabytes of PDFs, parsed them into usable data, translated them from eleven different languages into English and cleaned them into a comprehensive dataset of 825 million observations. This dataset allows us to estimate not only the average treatment effect of roads on economic activity and outcomes, but also to explore heterogeneity within and across villages.

Main result: roads lead to exit from agriculture
We find that households and individuals in villages just above the population cutoffs (those more likely to receive roads) are significantly less likely to derive their income from agriculture than those in villages below the population cutoffs (see Figure 1). Fuzzy regression discontinuity estimates show that rural road construction leads to an approximately 12 percentage point decrease in the share of rural workforce in agriculture, with a corresponding increase in wage labor market participation. This is true whether we use as a measure of economic activity a household’s main source of income or an individual’s primary occupation.

Figure 1: Share of households working in cultivation by population 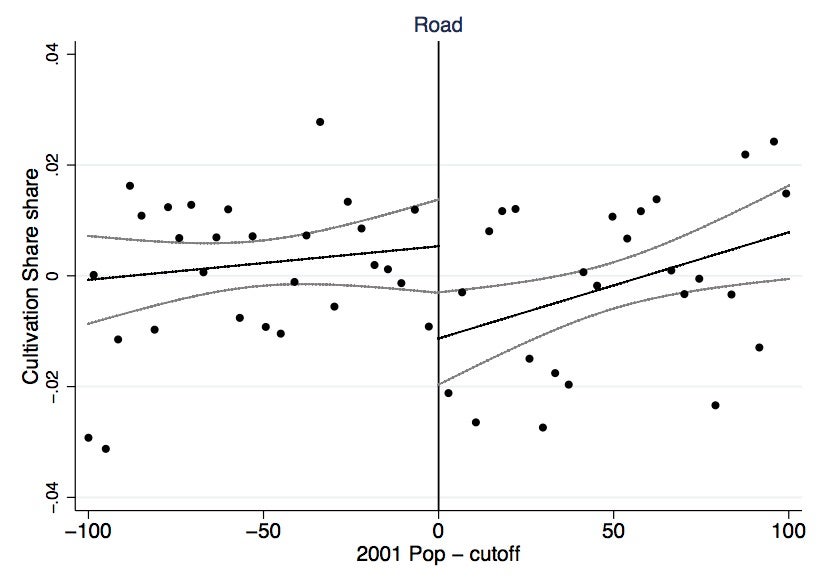 To put this effect size in perspective, our estimated impact is the equivalent of going from India’s share of the workforce in agriculture (47 percent) to China’s (35 percent). We also find that rural roads increase economic well-being, as measured both by household earnings and night light luminosity. In the case of night lights, which is measured annually, we find that road construction leads to an acceleration of the growth rate rather than a one-time increase in the level.

One of the strengths of working on a national program of this magnitude is the ability to examine heterogeneous outcomes. Consistent with our theoretical prediction that those with the lowest relative productivity in agriculture should be the first to reallocate, we find that effects are strongest among households with small landholdings (under 1 acre). A road is likely only as valuable as the market that it provides access to. Across villages, we find that our results are driven by locations within 100 km of large cities, with no discernable effects of road construction on occupational choice beyond this radius.

Roads let workers access labor markets outside of the village
Finally, we provide suggestive evidence on the mechanism by which roads reduce the share of labor in agriculture. For individuals to make the choice to change sectors, it must be either that relative demand for labor has gone down in agriculture or increased in the nonfarm sector, either inside or outside of the village.
We don’t find evidence for labor saving investments in agriculture that might reduce demand for agricultural labor. We also find no significant impact of roads on measures of the size of the nonfarm sector within treated villages. Finally, we find that movement of labor out of agriculture is strongest in districts with high rural-urban wage gaps. We interpret these findings as evidence that rural roads facilitate structural transformation by increasing the access of rural workers to external labor markets, either via commuting or short-term migration.

This project is made possible by having microdata on households linked to specific villages, but this comes at a cost: we do not have the richness of data available in sample surveys (such as the National Sample Survey, which has only district identifiers) or that we would collect if conducting a survey ourselves. We are thus unable to say anything about the impact of roads on major outcomes of interest such as agricultural productivity or a precise measure of wages, which we hope to examine in future work.

Implications for policy and research
These findings have significant implications for both researchers and policymakers. Investments in improved rural transportation infrastructure may be an important way for countries to facilitate structural transformation out of low productivity agriculture. Our estimates suggest the largest labor market effects for those households with very small landholdings, making these investments highly progressive. That the impacts of rural roads are concentrated in the areas closest to major cities suggests that access to urban labor markets is an important driver of rural economic activity. This paper demonstrates both that large-scale impact evaluations of major government investments are possible and that they can test predictions that would prove difficult in smaller-sample randomized controlled trials.

Sam Asher completed his PhD in economics from Harvard University and is currently a postdoc at the University of Oxford. More details about his research can be found at his website.

Nice work, brother Sam--clear, compelling and cute. Tastier than a pig's ear, breezier than a walk in the park, more impressive than a bagged poop. Proud of you. Will forward my comments to colleagues at U.C.C. (Canine) and Harriet B. Stowe School of Public Policy (ne Woodrow Wilson).
One question: do roads do any good increasing farm productivity? Or prices?