Why don’t we see more work at the intersection of IO and Development? Part One – is there a gap? 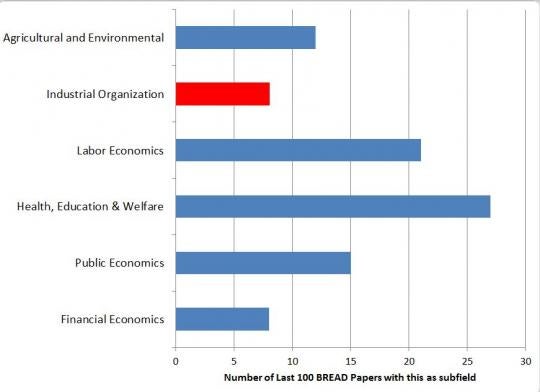 Moreover, the development literature seems far less influenced by the IO literature (and vice versa) than is the case with development and some other applied micro fields. So I thought it would be interesting to host a blog discussion on whether this is the case, where there is scope for development to learn from IO, what some of the challenges in doing so might be, and what the role, if any, of impact evaluations and better measurement are in doing this.

To get the discussion going, I thought I would ask a few questions of a couple of experts. I am delighted that Dan Keniston and Katja Seim very kindly agreed to share some of their thoughts on this topic. Dan Keniston is an assistant professor of economics at Yale University, and one of the few people I see doing work at the intersection of IO and development – a good example being his job market paper which uses IO methods to look at the autorickshaw market in India in order to try to answer the question many of us ask ourselves “why do we need to bargain over prices, wouldn’t it be better for welfare if fixed prices were charged”. Katja Seim is an associate professor at the Wharton School who works on IO and can offer a perspective of someone who hasn’t to date worked on development topics – she has worked on topics such as understanding the location decisions of firms, highway procurement bidding policy, market structure in cellular telephony, and the role of price complexity in consumer behavior.

Do you share my opinion that the combination of IO and Development Economics is a relatively underexploited field pairing, or do you believe this is not the case?
[DK] Yes, I certainly do. There are, undeniably, very few papers that investigate IO-style topics in developing countries, despite that fact that IO-related questions about firm growth and capital allocation are absolutely central to the growth models that address the big picture questions of development.
[KS] I share that view.  There is certainly relatively little work on questions central to the empirical industrial organization literature – such as strategic interactions between firms, entry and exit, or government programs geared at incentivizing firms – in developing country contexts.

If you were to think about this combination of topics, what work would you point readers to for good examples of how using IO methods has really helped in answering some key development question, or conversely, where work done in a developing country has made a good advance in the IO field?
[KS] There is a growing literature on estimating firm productivity and the effects of structural reform on firm productivity that frequently uses techniques being developed by IO economists, such as Tybout’s work, work by Amiti and Konings, or work by Khandelwal and coauthors on India.  While most of the productivity literature on developing countries appears to focus on the effect of trade liberalization on productivity (other than say your work!), and thus sits at the intersection of the trade and development literatures, the basic question of what drives productivity evolution and firm growth would appear central to development.
[DK] Just to name a couple, I would argue that Mahajan and Tarozzi’s work on dynamic demand for mosquito nets by sophisticated and unsophisticated dynamic discounters is a great example of the application of IO methods to development questions. Conversely, I think the development literature has come much further than the IO literature on questions relating to reputation, in particular the work of Rocco Machiavello on flowers in Kenya and Chilean wine exports.

Stay tuned for tomorrow’s second post, where we explore some possible reasons for lack of use of IO methods in development. Meanwhile, if you have more good examples of IO being used effectively to answer development questions or vice versa, please let me know in the comments.

Columbia University launched its Center for Development Economics and Policy yesterday and its director, Eric Verhoogen, works in this field. One of the initiatives of the center is actually focused on firms and innovation.

Actually there are couple by Nick Bloom's group. The one that comes to mind:
N Bloom, B Eifert, A Mahajan, D McKenzie, J Roberts Does management matter? Evidence from India The Quarterly Journal of Economics 128 (1), 1-51
But I suspect the issues of logistical,
-1-lack of good data collection on industrial activity, and
-2- more fundamentally to the hiring practices, retention and promotion of empirically-trained economists at leading economics and statistics departments in developing nations.
-3- finally the structure of industrial firms' ownership (family owned run) might militate against collaborating on longitudinal data collection with empirical IO researchers in developing nations.