Why Students are Protesting all Over the World: Evidence From an RD in Chile: Guest post by Alex Solis

In the past year we have seen students in countries around the world protesting about the cost of higher education and lack of financial aid: Chilean students have been protesting for 7 months to change the overall educational financing system; Californians have occupied the UC Berkeley campus to protest fee hikes, and thousands of English students last year have taken part in protests against increases in tuition fees. Why is this happening all over the world? The message is that students perceive that college returns are high and they have high preferences for higher education, but they are not able to afford it, or they do not have access to a credit market that give them enough resources to invest in this form of human capital. This explains in part the college enrollment gap between high and low income students, an empirical regularity that has been very well documented.

Economists, nevertheless, do not agree on the nature of this gap. Some have argued that there is no credit constraint and the gap is a consequence of differences in background (higher income students receive better quality education, preferences, information, etc.) See for example Cameron and Heckman (2001), Carneiro and Heckman (2002), Nielsen et al (2010), among others. However, others, sometimes using the same data, have presented evidence in favor of the existence of credit constraints (Kane (1994, 1996), Dynarski, (2003), Belley and Lochner (2007), and Lochner and Monge-Naranjo (2011).

Finding evidence on the importance of credit constraints is difficult for two reasons: credit constraint status is not observable, and enrollment also depends in un-observables that are correlated with credit access. Therefore indirect measures of access to credit markets have been used and, not surprisingly, the conclusions on the literature are often contradictory and controversial.

In my job market paper, I exploit the sharp eligibility rules of two student loan programs in Chile that give access to college tuition loans. To be eligible students need to

-          Apply for the programs before taking the national college admission test (PSU test).

For the group of students that score around the program cutoff, scoring barely above or below is quasi random (a simple mistake may change the score from above to below the cutoff) and therefore the loan eligibility depends on that natural randomization enabling a regression discontinuity design. Comparing just below with just above the cutoff addresses the problems of unobserved omitted variables and self-selection, allowing for an unbiased estimate of the causal effect of loan access (directly) on college enrollment.

One additional complexity to the estimation of the effects of loans on college enrollment is usually that there are several unobserved sources of variation in enrollment and in the availability of loans. On one hand, in many countries, college admission depends on the evaluation of subjective variables (i.e. letters of recommendation) that are unobserved by the econometrician. On the other hand, loans (and aid in general) are used as a mechanism to compete among universities trying to attract better students. A key feature of my analysis is the availability of a detailed student-level data set that presents several advantages. First, I observe the entire population of individuals who participate in the national college admission process, including full information on their enrollment, loan eligibility, loan take-up, scholarships, objectively-measured family income, and socio-economic characteristics. Second, I observe the two variables that completely determine college admission: the score on the national college admission test and high school GPA. Finally, the two loan programs of interest offer standardized loans to eligible students. The nature of the loan programs and the availability of these data allow evaluation of the causal effects of credit access on college enrollment and college persistence.

The following figure shows the main result of the analysis: access to the loan programs increases the college enrollment probability by 18 percentage points -- equivalent to a nearly 100% increase in the enrollment rate of the group with test scores just below the eligibility cutoff. Students from the lowest family income quintile benefit the most: for these students access to the loans causes a 140% increase in the probability of enrollment (on a baseline enrollment rate of 15% for students just below the test score cutoff). 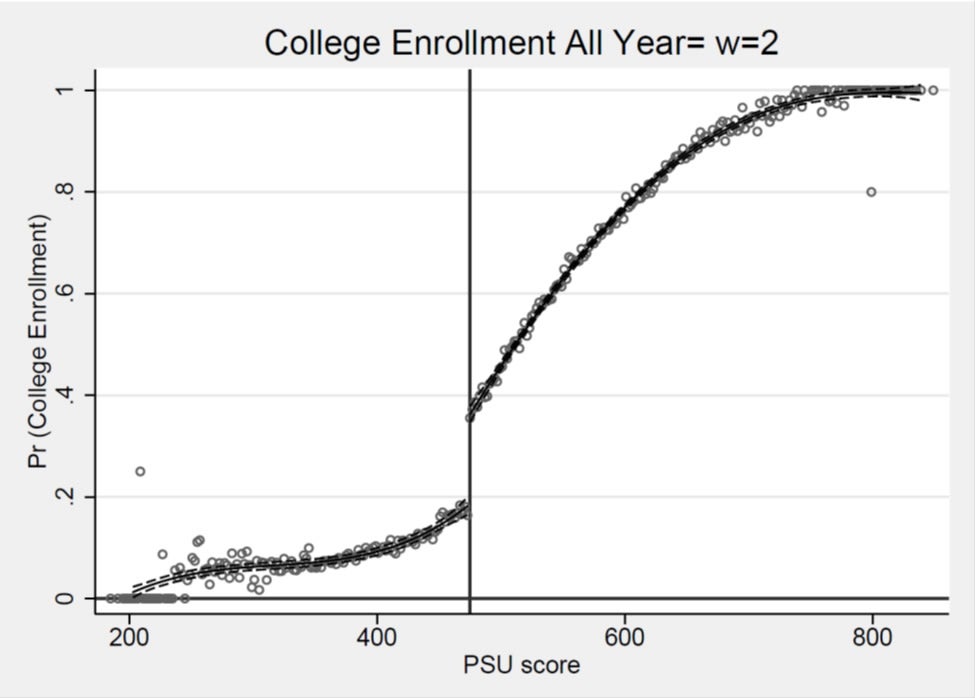 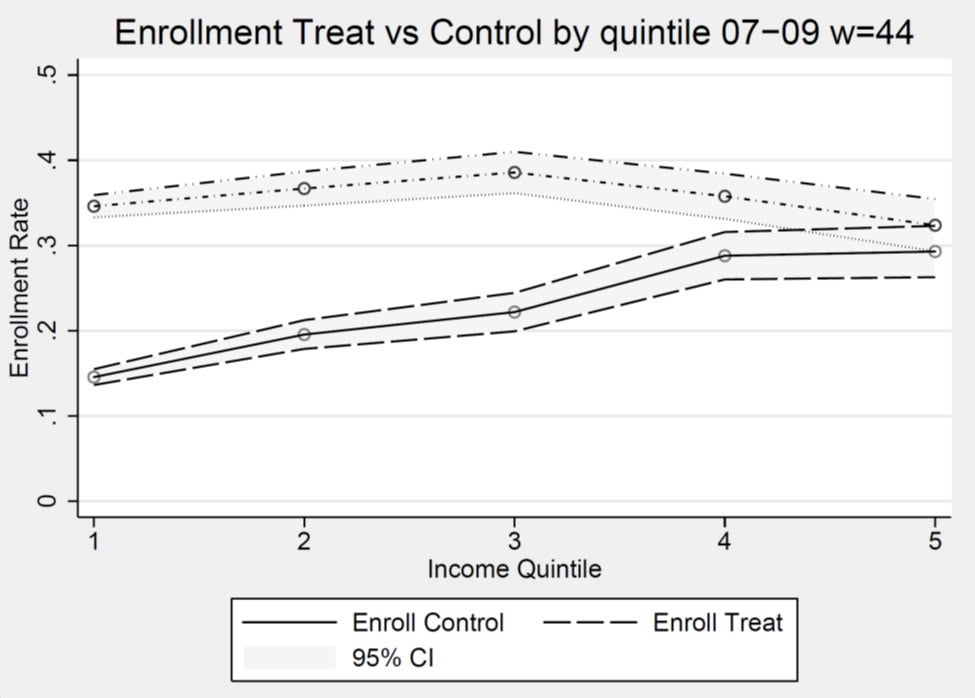 The main weakness is that regression discontinuity is highly consistent for the students around the discontinuity, but we cannot learn much about what happen to students in other part of the score distribution. To deal with this problem I present a second identification strategy that neutralizes family background: I show regressions using family fixed effects for a sample of twins. The results are statistically indistinguishable from the results using RD, which indicates that the effect of loan access on enrollment is similar in other parts of the test core distribution.

This evidence shows that loan access is very important in explaining college enrollment and the enrollment gap by family income. It also sheds light on the importance of policies that complete credit markets in countries with less financial development, to allow not only increasing human capital stock favoring economic growth, but also alleviating intergenerational income inequality.

Alex Solis is a PhD student from The University of California at Berkeley currently on the job market.

Is this a logit regression model Alex?

The main goal of this paper was to show evidence that students from low income families do not enroll because of lack of access to credit markets for human capital. Previous evidence suggested that the effect of credit access on college enrollment is small to not important, suggesting that the difference in college enrollment between students form high and low income families relies exclusively in difference in readiness to college.

Comparing different mechanisms to increase higher education coverage is beyond the goal of the paper. I agree with you that is very important and, actually I am working to determine the distributional effects of this policy, compared to other mechanisms used to increase college enrollment, e.g. grants, scholarships and perhaps free education.

Lastly, is difficult to determine if loan programs are the best policy using protest as instrumental variable. The main concern is selection. We are observing how unhappy some debtors are with this programs, but we don´t nothing about those who do not protest.
I really appreciate your comment
Alex Solis

Dear Alex,
in the article you have advocated for the student loan to increase access to higher education.You rightly mentioned about the student protests occuring worldwide.But unfortunately you forgot to consider what is happening in the Occupy Wall Stret movement(OWS).Student debt has occupied a core place in OWS.Students are protesting strongly against the very concept and the philosophy of student debt.Nearly 7 crore Americans are suffering from the student debt. Now,not only the students but adults and old citizens are on thetrees to oppose the student loans.Theeir aim is that that the government should take the responsibility to educate the every generation through the taxes and not through the debt.
Hence sincerely please note what of OWS....
sanjay dabhade,
pune,
INDIA.

Dear Alex,
thanks for your response.Here in India all the commercial forces who want the commodification of higher education for their profittering are in the favour of student debt.Education barons,private banks and last but not the least that is the State ,all are advocating student debt.I am sure that debt can not be a measure to increase acess and equality in access.The only mechanism fot this is adequate government spending as higher education is also a public good.World bank should not interfere in the State's policies for its private gain.
But,I appreciate your research and will like to be in touch with you.I will be thankful to you if you could send me articles and relevant documents.
With warm regards,
sanjay

Have you done any research on the impact of student loans in India. I am a law student interested in writing a paper on the subject

I guess you are thinking on the first figure. Each dot represents the average enrollment for students within a bin of 2 points. The fitted regressions are polynomial splines at each side of the cutoff. Logits regressions gives more or less the same outcome.