This is the eleventh entry in this year's job market series. You can read the previous entries here.

"On March 5th, we went to sleep as poor colonos [laborers]. On March 6th, we woke up rich, as landholders."  –Cooperative Member, La Maroma Cooperative, 2017 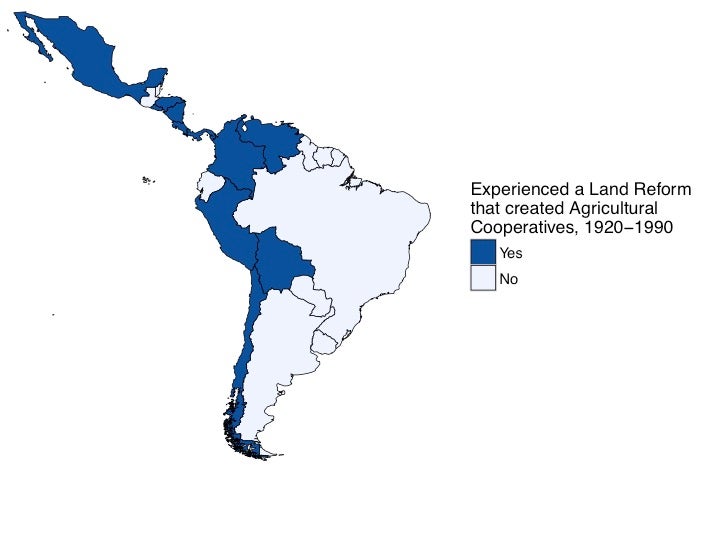 In my job market paper, I use a unique feature of a land reform program from El Salvador in 1980 to provide the causal impacts of cooperative property rights on agricultural productivity, crop choices, and economic development. Prior to the land reform, almost all of El Salvador’s agricultural production was organized in the form of haciendas. In fact, an estimated 1 percent of landholders owned over half of El Salvador’s agricultural land. As a result of the land reform, properties belonging to individuals with cumulative landholdings over 500 hectares (ha) were reorganized into cooperatives to be owned and managed by the former hacienda workers. However, properties belonging to individuals with cumulative land holdings under 500 hectares remained as privately-owned haciendas.

The El Salvador land reform had two important features that provide discontinuous variation in the probability of cooperative formation that I use to identify the impacts of cooperative property rights on economic outcomes. First, the cumulative ownership threshold of 500 ha creates a set of similar properties, some of which happen to be owned by someone with more than 500 ha in total holdings and were therefore reorganized into cooperatives, and some which were owned by someone with cumulative holdings just below the threshold and therefore were not reorganized into cooperatives. The second key feature of the land reform is that the military executed the reform swiftly and took multiple steps to ensure its secrecy prior to its implementation. This prevented large landholders from being able to selectively adjust their cumulative landholdings to avoid expropriation prior to the implementation of the reform.

Using data from El Salvador’s 2007 census of agriculture, I find several key results related to agricultural productivity. First, relative to haciendas cooperatives devote less land to cash crops, such as sugar cane and coffee, and are less productive at cash crops. However, this is not the case for staple crops, such as maize and beans. Cooperatives devote more land to produce staple crops and are actually more productive at these crops relative to haciendas. Interestingly, I find no evidence that cooperatives are on aggregate less productive than haciendas.  By this I mean that cooperatives and haciendas have similar levels of revenues and profits per hectare. 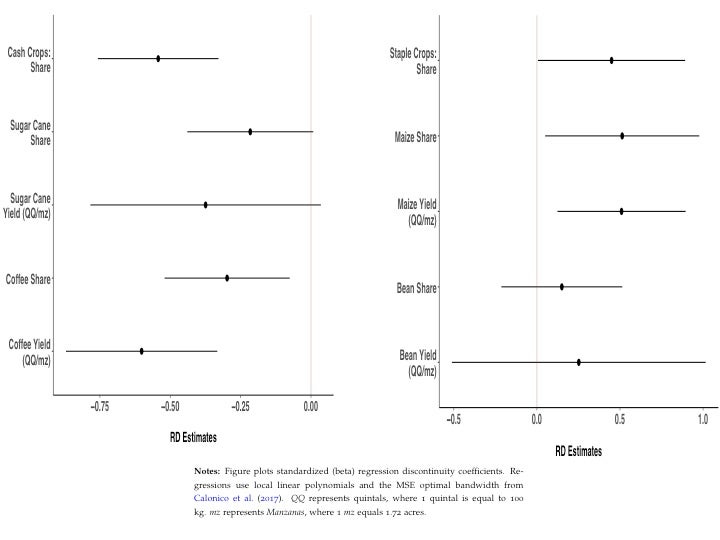 These results are consistent with a property rights model of agricultural cooperatives, in which cooperative voters choose to redistribute cash crop earnings, which therefore reduces the cooperative’s productivity in the production of cash crops. In the model and in focus group discussions with cooperative members, because workers can consume staple crops directly if their output is taxed, staple crops are not subject to this redistribution. As a result, cooperatives are more likely to focus on staple crop production and are more efficient than haciendas at producing staple crops.

The results in this paper speak to a modern policy question in Central America today, where there has been renewed interest in exploring “cooperative development” in the last few years. In fact, the UN declared the year 2012 as the “International Year of Cooperatives”. Additionally, this paper provides important evidence on the long-run impacts of land reforms that reorganized firms from outside ownership. The results are encouraging: they suggest that land reforms that give workers a stake in the production may benefit workers and development.

Eduardo Montero is a PhD student at Harvard University.