Digitization is unlikely to destroy jobs, but may increase inequalities

In recent years, there has been a revival of public concerns that automation and digitization might result in a jobless future. This debate has been particularly fueled by Carl Benedikt Frey and Michael A. Osborne, who argue that 47% of jobs in the US are ‘at risk of computerization.'

These alarming figures spurred a series of studies that find similarly high shares of workers at risk of automation for other European countries. By focusing on the level of occupations, these studies typically neglect the fact that occupations involve bundles of tasks, many of which are hard to automate. As a result, these studies potentially overestimate the share of workers at risk of automation.

For instance, bookkeeping, accounting, and auditing clerks in Frey and Osborne’s study face a risk of 98% of becoming automated in the near future, although most workers in this profession perform tasks such as face-to-face interactions that seem rather unlikely to become automated soon without extraordinary effort and costs.

In a recent study for the OECD, we analyzed the heterogeneity of tasks at the level of jobs to re-evaluate the share of jobs that could be performed by machines. For this we use internationally comparable task information for 21 OECD countries at the worker level provided by the PIAAC data base.[1] Our findings suggest that the automatibility of jobs is significantly lower when taking into account the actual tasks performed by workers at their individual jobs. 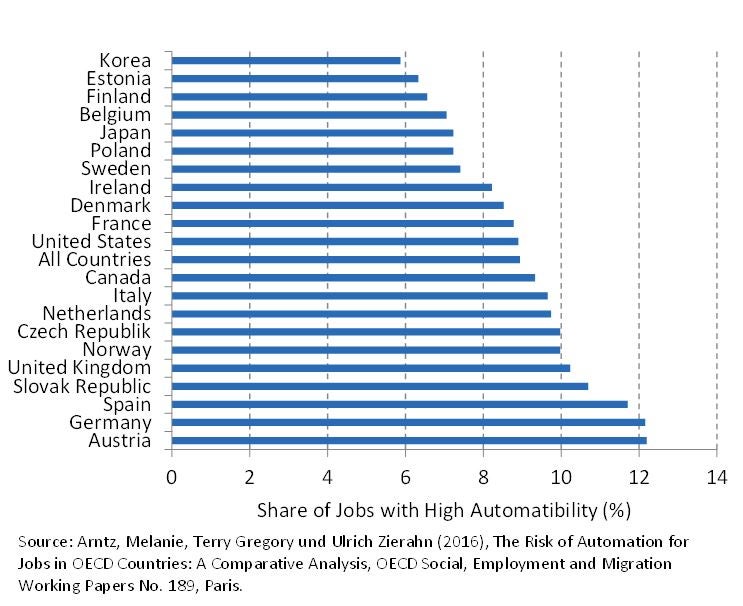 The threat from technological advances thus seems to be much less pronounced than suggested by the widely cited set of automation studies applying the method of Frey and Osborne. Still, even our lower figure of 9% seems worrisome at first place, as it suggests that every tenth worker might experience a machine or robot taking over his job. However, the estimated share of ‘jobs at risk’ must not be equated with actual or expected employment losses from technological advances for three reasons:

The economic outlook for the future of work might not be as pessimistic as many suggest. In particular, automation and digitization are unlikely to destroy large numbers of jobs. It seems more likely that workplaces will change and require different skills from workers compared to previous decades. Nevertheless, low qualified workers may face harder challenges to adjust in the digital transformation as the automatibility of their jobs is typically significantly higher compared to those of highly qualified workers.

This feature is strikingly consistent across all countries in the sample. From a policy perspective, the likely challenge for the future lies in counteracting rising inequality and ensuring that low qualified workers cope with the changing skill requirements. In emerging economies, however, technological change might have different effects, as these countries face a different technological endowment.
------------------------------
[1] We exclude the Russian Federation from our sample. This is because when we restrict the Russian PIAAC sample to those observations where all relevant variables are non-missing, then the distribution of these variables is not representative. Thank you for a great explanation. I was looking online for a similar idea and really appreciate it