The economic and social consequences of robotization

Harm Bandholz, guest blogger, is the Chief US Economist for the UniCredit Group

Robots are just one of the latest stages of technological progress. The number of robots being used by businesses to boost productivity has increased rapidly in recent years. And there is no reason to believe that this pace of robotization will begin to slow any time soon.

On the contrary, as the cost of robots continues to fall while their capabilities go up, and with the robot density in most industries still relatively low, the International Federation of Robotics (IFR) anticipates that yearly robot installations will continue to grow at double-digit rates for the time being. 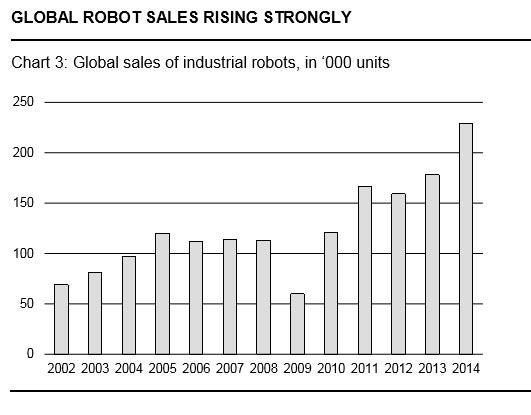 Rising inequality and slow productivity gains may be the main economic challenges of the 21th century. And the increased use of robots should affect both of these developments – positively as well as negatively. While empirical literature about the impact of robots is still in its infancy, there is now a growing number of studies which begin to support the notion that they lift productivity, wages and even total labor demand, but mostly benefit higher-skilled workers. With the increased use of robots, computers and other machines, the latest round of technological progress now largely comes at the expense of middle- and low-skilled and -wage workers.

According to these studies, the productivity impact of robots is already comparable to the contribution of steam engines. And while still lagging behind the impact of ICT (information and communications technology), one has to keep in mind that the total value of ICT capital by far exceeded that of current robot services. Some of the productivity gains from robot densification are shared with workers through higher wages. 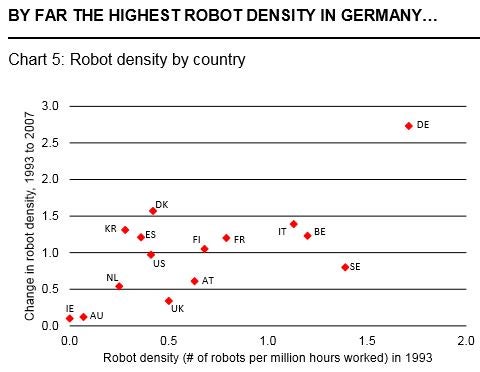 The issue is, however, that different income and skill groups do not benefit to the same extent, which means that robotization further adds to income inequality. To allow for a broader share of the population to reap the benefits of this technological progress, two sets of actions should be taken.

Skills and Education
We need to rethink our education system. As robots and machines are capable of taking over a growing number of tasks, humans have to focus on their comparative advantages, including non-cognitive skills. In addition, advanced countries (notably the US) have to halt and reverse the trend that the quality of student education is primarily determined by parents’ income and wealth, as this unequivocally amplifies the negative inequality spiral. But even if politicians do adopt the necessary changes to the education system, increased technological progress will most likely still lead to growing income inequality, as people have different skills, as well as different financial conditions.

Spreading the Ownership
Due to this inequality, there is a growing need to reallocate income from rich to poor and/or from owners to workers. In theory, there are three possibilities to try to partly offset or mitigate the ongoing decline in labor’s share of income: 1) Higher wages through collective bargaining or minimum wages. 2) Redistribute wealth and income through tax-and-spend policies. 3) Spread the ownership of capital to ensure a more equitable distribution of robotic rents.

The first two options have been the traditional ways to redistribute profitability and income gains, and they will certainly be used again this time. There are, however, tight limits to what can be achieved through them. Indeed, if robots compete with low and medium-skilled workers, raising (minimum) wages would only accelerate and intensify the substitution of labor with capital.

Note: This blog is an edited version of a research report published on August 31 titled Rise of the Machines. The full version can be read here. 1. Companies that can afford to robotize their companies could offer employees shares in their companies and offer to tie their redundancy money into company investment.
2. Let's face it with the rate of ozone depletion in the near future day time labourous work is best undertaken by robotics.
- Human monitoring will still be necessary.

other than moving into socialism where government have to provide citizens with basic needs, employee ownership looks like the only way out.