Jobs and health in South Africa

Despite being one of the richest countries in Africa, South Africa is characterized by a low labor force participation (LFP) and very high unemployment rates. Excluding the unemployed who are not looking for jobs from the pool of participants, the LFP rate declined from 59.4% in 2001 to 57.2% in 2005, and 54.3% in the final quarter of 2011. Though there has been a slight increase recently, it still remains below most sub-Saharan African countries. Unemployment remains stubbornly high at around 25%. Youth unemployment is even more chronic: the unemployment rate among youth aged 15-24 years exceeds 50%. These low participation and very high unemployment rates have far-reaching implications for economic growth and the sustainability of South Africa’s extensive tax-funded social welfare system.

Though demand-side factors like job availability play an important role in enhancing LFP and employment, it is perhaps equally important to ascertain the role of supply side-side factors. Evidence abounds on the role of education and gender in LFP and employment determination in South Africa. However, we know very little about the potential impact of health in this regard.

South Africa is saddled with a high disease burden. Measuring the number of years of productive life lost due to illness/disability and years of potential life lost due to early death, disability-adjusted life years exceeded 46,000 per 100,000 population in 2004. And exceeded 67,000 by 2012. Driven in large part by a high HIV/AIDS prevalence, other diseases also play a major role. Indeed, South Africa has been described as having a quadruple burden of disease due to HIV/AIDS and tuberculosis; maternal and child mortality; violence and injuries; and non-communicable diseases.

Descriptive evidence from the National Income Dynamics Study, a nationally representative longitudinal survey of individuals and households in South Africa, indicates that sickness/disability is persistently a key reason why many unemployed South Africans do not seek employment (see Table 1). 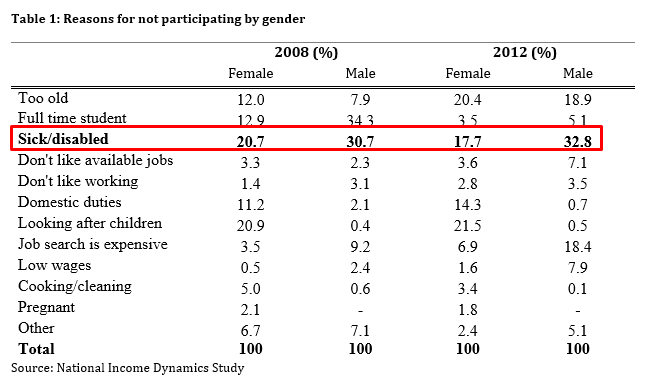 Good health equals good employment
A study on the impact of health on LFP in South Africa found that being healthy (defined as rating one’s health excellent, very good or good) increased the likelihood of participating in the labour force by 29%-33% relative to being sick (i.e. rating one’s health fair or poor) for men. This effect was 20%-23% for women. The study also showed that the effect of health on LFP was not only limited to the short term but persisted for up to four years.
Though deciding to participate in the labor market is important, actually finding a job is more so. A similar analysis was conducted in a study on the impact of self-assessments of health on employment among South Africans aged 15-39 years. Fair/poor health ratings reduced employment probability by approximately 29% on average (relative to excellent health ratings) among this age group. This effect exceeded that of having at least twelve years of schooling.

Indeed, a significant impact of health on employment does not just hold only for youth. In another study that included older individuals, being HIV-positive resulted in a 6%-7% decline in employment probability. The fact that a single health condition has such a large impact on employment shows what an impediment poor health is to employment in South Africa.

The above therefore raises the question of whether, and how, to explicitly incorporate health policy as a key component of labor market policy in South Africa. So far, it appears the debate on health policy in the country has not fully articulated the labor market implications of poor health. Moreover, though there is a general call for people with disabilities to be afforded enhanced access to quality education and employment in the South African National Development Plan, improving population health was conspicuously missing from among the specific actions identified for dealing with high unemployment. But as shown by the above mentioned studies, better population health will boost labor force participation and employment, thereby complementing job creation and education-oriented interventions. One hopes that these findings may provide added impetus for the implementation of the National Health Insurance Scheme in South Africa.