A jobs solution to the migration crisis 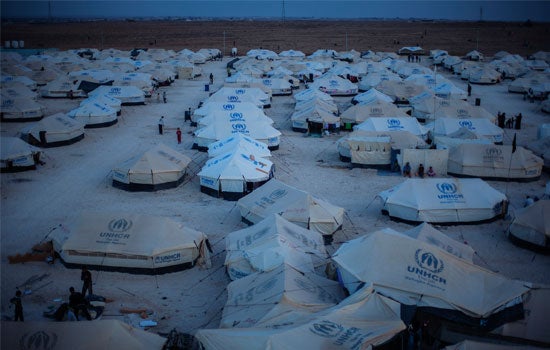 Violent conflicts such as that currently raging in Syria generate both immediate and future economic challenges. Viewed in the present, large numbers of people are displaced by conflict, in the process losing their means of livelihood. Viewed prospectively, prolonged conflicts bequeath wrecked and risky economies which are slow to recover. To date, these challenges have been treated as entirely distinct both conceptually and institutionally. The challenge of the displaced has been seen as a duty of care, and is managed by UNHCR. The challenge of post-conflict economic recovery has been conceptualized as development assistance and is handled, once peace arrives, by the international development agencies such as the World Bank.

These approaches are deeply flawed. By reducing the needs of the displaced to ‘care’, traditional humanitarian approaches radically mistake their condition. Their primary losses have been their means of livelihood and their homes. Hence, their primary needs are the restoration of a means of earning a livelihood and a credible prospect of return. Establishing systems in which people in camps spend years being fed by international donations while living in enforced idleness is a travesty, deeply degrading to the human spirit. Unsurprisingly, most refugees prefer instead to take their chances in illegal employment on the margins of the cities of host societies. Similarly, by reducing the challenge of economic recovery to the provision of post-conflict, the development agencies miss the distinctive opportunities for incubating recovery generated by displacement.

What is needed is an integrated approach to displacement and post-conflict recovery. The displaced could, if adequately supported, constitute an economy-in-exile which, once peace was restored, could return and speed recovery. Camps, instead of being the repositories of human tragedies, should be the job havens that incubated the future economy. In effect, they should be portable cities rather than cruel imitations of holiday camps. To see how this might work, I take the current situation of Syria.

Currently, around half of the population of Syria is displaced: ten million of them. Of these, around five million are already outside Syria, largely in neighbouring countries. Jordan alone has around a million; its largest camp, Za’atari, is only minutes away from a huge and virtually empty industrial zone. The zone is large enough to employ the entire labour force of the camp twice over. Between them, the zone and the camp could provide three types of employment, analogous to an ordinary city.

​The export base would be the production of footloose, internationally traded goods such as light manufactures. Alongside this would be the production of goods that are traded locally, with their primary market being the refugees themselves, such as many types of processed food. Each of these would be well-suited to location within the zone. The firms through which this production was organized would in part be existing Syrian firms that need to relocate because of the disruption of conflict, and partly international firms attracted to the zone through a combination of financial incentives provided by donors and a sense of corporate social responsibility. The budgets under which donors would finance the incentives would come not from the miniscule allocations for refugees, but from the justly substantial budgets assigned for the recovery of fragile states. The primary purpose of job havens would be to incubate the future post-conflict Syrian economy.

The third type of employment would be highly localized services, which are best interspersed with homes within the camp. All that is needed for this is straightforward facilitation. Currently, for example, the informal shops that have sprung up in the camp, run by refugees, are excluded from the official system of food distribution. Refugees are given money to purchase food, but the money is a restricted token currency that can only be redeemed by the assigned person in one of two official food shops. Currently, commercial activity is discouraged. For example, I talked to a group of refugees who has ingeniously rigged up an electricity generator which supplied around 20 households, but they were careful to explain that they supplied it for free. Most egregiously, children remain uneducated while around 200 Syrian teachers sit idle.

Once peace returns to Syria, as it will, these economic activities could relocate to Syria along with the refugees. Directly, this would speed the post-conflict jobs recovery, which would be stabilizing. But it would also serve a valuable current role: the refugees working in such enterprises would have a living sense of rebuilding their normal lives.

Job havens also benefit host societies which is important because the approval of host authorities is evidently necessary. While the motivation for donor finance would be to incubate the future post-conflict economy, its current impact would be to enhance the host economy. Further, successful incubation would benefit the future of the host economy. Once a firm that is producing for the international market is operating profitably in the host country, there is no reason for it to close once peace returns. It can simply set up a parallel operation in Syria, using its returning workforce. Such pump-priming of international enterprises is rightly attractive to host governments.

The World Bank Group is ideally placed to facilitate jobs havens. The World Bank itself manages substantial finance for aiding post-conflict recovery, and its sister agencies of IFC and MIGA have evident and important roles in attracting and coordinating international firms, and in mitigating risks. Beyond finance, the international community can also induce job havens by privileged market access for their output. In the case of Syria, the most pertinent market would be the European Community.

Unsurprisingly, Syrian refugees want to return to Syria once peace is restored: even with the current appalling inadequacies of the international response only 2% of the displaced try to get to Europe; so few as to be virtually irrelevant for addressing the massive challenge of displacement. However, this marginal flight to Europe has galvanized European concern. Inadvertently, this has probably made the more humane and effective response that would be achieved through the promotion of jobs havens, politically feasible.

Paul Collier is Professor of Economics and Public Policy at the Blavatnik School of Government, Oxford University, and a Director of the International Growth Centre.
Topics
Jobs & Development We could use the Trade Mark owned by Women Wearing The Pants Inc. (The Fair And Free World Trading Company) to manufacture Fair Trade tee-shirts (to compete with Hanes) and market the tee-shirts as exactly what they are (sustainable jobs) sell tee-shirts to NGO's at cost to promote Fair Wage. Sell in bulk through COSTCO as they compensate Fairly and then return ALL profits to same manufacturing area as aid towards education and health. A beautiful circle!

I just want to commend this write-up especially for its humanitarian perspective and solid plans for restoring live to a huge population of people in danger and poverty for no cause of their own. It is the difference between evil and good. Prof thank you and more grease to your elbows.