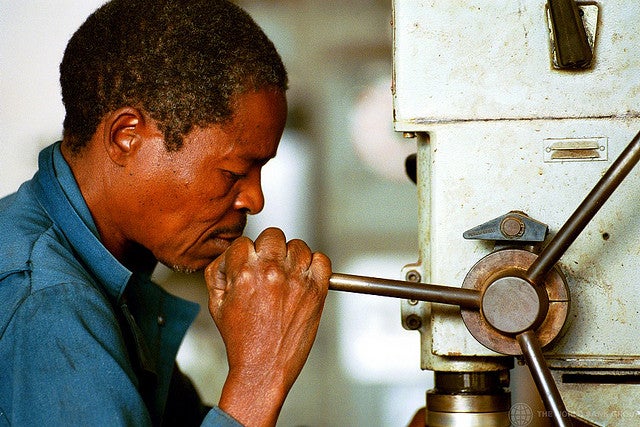 The high cost of doing business impedes private sector growth in Zambia. In a country where the majority of the jobs are expected to come from the private sector, the costs of hiring and firing workers are an important determinant of firms’ competitiveness. Recently, the issue of minimum wages have also taken center stage. The government has been trying to create jobs with adequate incomes and which protect workers from abusive conditions of service; the private sector has been pushing for a flexible labour market policy environment.

With only 14% of the labour force in formal employment, job creation is a very important policy challenge in Zambia. The government wants to increase the levels of formal jobs in the country, where 80% of the employed work in the informal sector. The private sector has been playing an active role in job creation, employing 46% of those formally employed in 2014. However, there is reluctance by new investors to hire workers on a permanent basis, preferring instead to engage workers on short-term employment contracts. This practice has come to be commonly referred to as casualization. There are also concerns regarding the erosion of decent earnings and working conditions.

Since many of these issues mostly affect the majority of workers who are unskilled and semi-skilled, they are more political than social issues. The result has been that the Government has put in place regulatory systems that might favor the workers, while employers have been lobbying for a more user-friendly regulatory framework. In principle, there has been an understanding by all stakeholders that comprehensive labour law reform could resolve this impasse, but the government has instead opted for a piecemeal approach.

Stakeholder dialog
Since 2007, successive governments have attempted to amend the Employment Act with a view to curbing casualization, short term employment contracts, and triangular employment relationships. In 2014, the government introduced an employment act amendment bill which aims to address issues. In 2015, the government indicated that it will present a fast tracked employment bill to parliament that will specifically ban casualization and labour broking. It will also deem fixed-term contracts as permanent after exceeding allowable limits.

These pieces of legislation pose some potential problems. Take for example, the uniform minimum wage. Granted, a national minimum wage has the advantage of providing equal protection for all workers, and is much more easily monitored and enforced. But it does not easily account for inter-industry variations.  Industries such as agriculture and tourism are naturally labour intensive, but wage levels are lower compared to sectors such as financial services and mining. A uniform application of minimum wages will therefore hurt the former more than the later. In this case, consideration for sector based minimum wage levels will be important, to take into account the sector variations.

Furthermore, the country’s employment legislation does not adequately address many other employment categories, including temporary workers, part-time workers, piece-workers and seasonal workers. Casualization is attributed to the practice of hiring workers on a non-permanent basis with no clear distinction of the differences between various employment relations. In this case, the application of the law is rather vague: for example, one-year fixed contracts or seasonal employment are regarded as casualization.

Employers have also been reluctant to engage labour on a permanent basis to avoid the excessive retirement burden imposed by employment laws. Due to a weak national pension system, employers are compelled to carry the burden of employees. Employers argue that the national pension system should first be enhanced to enable it to support workers when they retire. Their contention is that the government should not rush to give a limit to fixed or short term contracts until this issue is resolved.

Labour reforms have been a key reform agenda in Zambia for quite some time. Experience on the ground shows that labour laws can have a significant impact on poverty and competitiveness. When laws have been loose, workers have been disadvantaged. When the government has tried to tighten the ropes, employers have been hurt. Therefore, finding the right balance is essential.
Topics
Jobs & Development
Poverty
Countries
Zambia
Regions
Africa I find this article to be very helpful.However,i feel issues to do with labour brokers and when they cease to be in control of the employees have not been adequately addressed in the current labour act.Furthermore,the minmum wage for commercial Drivers such as Truck drivers is not distinctively stated on the chart.It is inconceivable that a truck drivers salary can be the same as that of an ordinary drver hired to do domestic erands.

this was useful.help me to analyse this, critically analyze the effectiveness of the legal framework in governing the enforcement of the contract of employment