Private sector and youth employment: the experience in Kenya 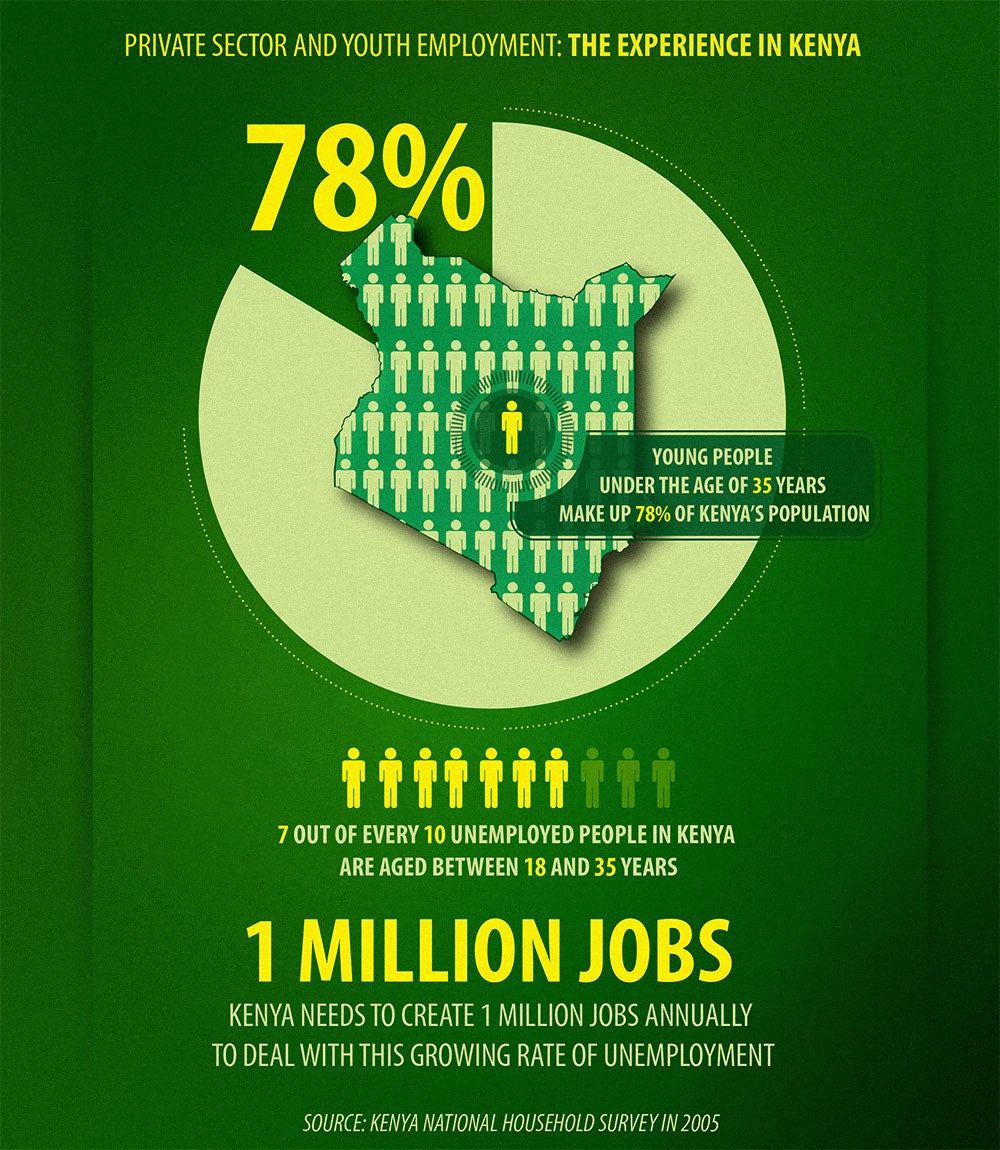 According to the last Kenya National Household Survey in 2005, young people under the age of 35 years make up 78% of Kenya’s population. The same data points out that seven out of every 10 unemployed people in Kenya are aged between 18 and 35 years. Given that the country needs to create 1 million jobs annually to deal with this growing rate of unemployment, the private sector has a critical role to play.

The good news is that Kenya is a promising place in which to do business. It has growing markets and opportunities. The private sector in Kenya is vibrant, well developed and hosts one of the largest business communities in sub-Saharan Africa. The private sector is split into two parts: a formal, large business sector which is relatively healthy and productive and a massive informal sector made up of small and medium-sized businesses, which is poorly supported in terms of working conditions, financing and skills development programmes. The informal sector employs almost nine out of 10 workers.

To tackle the youth employment challenges, successive governments have put in place a range of different interventions. But to date none have effectively engaged the private sector. The turning point came after the post-election violence experienced in 2007.  The private sector, under the umbrella of Kenya Private Sector Alliance (KEPSA), made a conscious decision to tackle youth unemployment and approached the Government to discuss how it could contribute. A project was launched to specifically address the mismatch in skills, geared towards providing youth with much needed work experience. The Kenya Youth Empowerment Project (KYEP) then became the first Public-Private Partnership addressing youth unemployment directly, and the greatest commitment for both government and private sector to date. The pilot project is funded through a credit by the World Bank.

The overall objective of the project is to improve youth employability by engaging the private sector to provide training and workplace internships to young persons aged 15-29 years, with a minimum of eight years of schooling. Beneficiaries must have been out of school for more than one year and should not be engaged in both wage and self-employment. At the inception of the project, a training needs assessment was conducted to identify skills demanded by the employers in a range of sectors. The idea was to provide some market-driven skills (not just technical or professional) that would enable youth to secure either wage or self-employment within six months after the completion of the program. 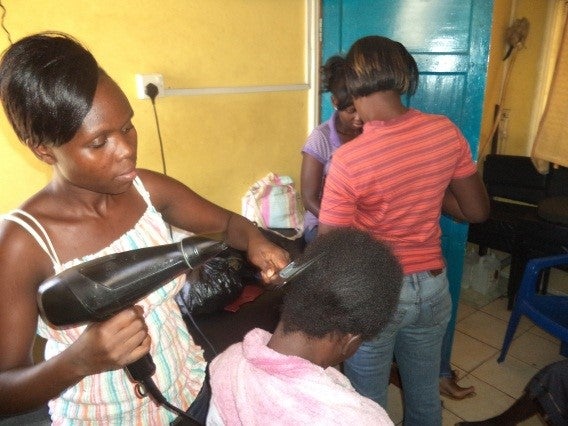 Saida Alinoor is one of the beneficiaries of this program. She is a young Somali girl who used to reside in one of the poorest slums of Nairobi and comes from a single-parent family. This situation led her to drop out of school when she was in her second year of secondary education due to a lack of money to pay for school fees. However, she was determined to change her life course. “I was just at home with nothing gainful to do and had lost hope in life, remaining indoors, hoping something better would come along. Until KYEP came knocking. I applied and I was lucky to get selected,” Saida says.

While at KYEP, Sadia undertook the two week mandatory Lifeskills training and three week core business skills training, as well as two weeks of entrepreneurship skills training.  “The training improved my self-esteem. I could not talk in a public gathering, since in my culture, women were not allowed to address gatherings. I cannot believe that I can now stand in front of a large crowd and address them. I did not believe in myself before, but after the trainings, I have confidence,” she says. “I was posted to do tailoring with an employer in one of the large markets. I had a supportive employer who mentored me and encouraged me (so) that I could make it on my own… so I saved the little stipend I received from KEPSA and bought my own sewing machine”.

After the programme, since she did not have enough capital to acquire business premises, she decided to sew clothes from her home. She began with only a few customers, yet gradually the number started growing and as a result, she managed to raise capital. “I opened a Fashion Design shop,” she says, “where I mainly concentrated on making bed covers. I now make a profit of $ 40 in a day”.

Vincent is another beneficiary of the program. His story is very similar. He holds a Diploma in   Human Resource Management focused on Finance and Administration.  After finishing college, armed with his qualification, Vincent had to job hunt for three years, but he was eventually lucky to be selected in the KYEP programme.

Vincent, who is soft spoken, says “I liked the Life Skills Training very much. It was very interactive; I also appreciated the Core Business Skills Training. I was thereafter placed with Diversey Eastern and Central Africa Ltd in the Human Resource department. The biggest advantage I got was the exposure to employment opportunities, where I gained relevant skills in Human Resource Management”.  Vincent is now the Assistant Human Resource Manager and is currently earning over $625 a month. 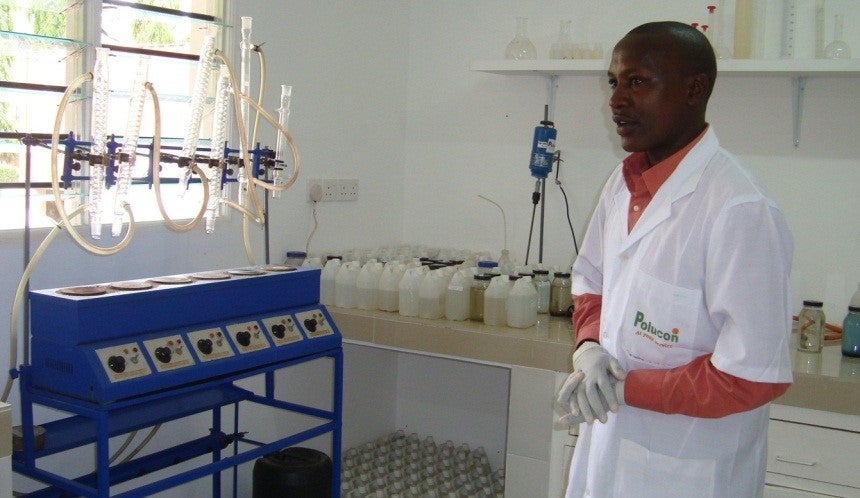 The above testimonials are a reflection of effectiveness that has come out of private sector collaboration with government and development partners in Kenya. So far, eight out of every 10 youth participating in the program end up engaging in gainful economic activities either as an employee or starting their own business. Many employers have attributed this success to the skill-set the youth acquire from the training. Specifically the soft skills, which include confidence, self-worth, presentation and communication among others, has contributed in shaping the young people who go through the project.  Though the private sector gets a subsidy as an incentive to participate in the program, there is a long term commitment by the sector to tackle the youth employment challenge.
Topics
Jobs & Development
Countries
Kenya
Regions
Africa much help after reading this article thanks | Obat Aborsi

That is so good. Experience gives one confidence: even in such a competitive world.

I liked the article. However, though some economist are of the opinion that to reduce the high levels of unemployment in Kenya, there is need to create 1 million jobs annually, there is no current data showing the rate of unemployment as at 2014. The last labour force survey report is of 2008 which analyzed the KIHBS 2005/06 cross sectional data. There is no empirical study based on analyzed results showing the need to create 1 million jobs annually. Moreover, for how long should this 1 million jobs be created? 5 years
Again, the labour force survey report of 2008 indicates the number of unemployed per age group, not per age. In your opinion, do you think there is need for another household budget survey.
I agree that KYEP has helped in creation of jobs, through self employment and formal employment. However, is there another program that can be sustainable and self sustaining for the future.

Ehud, this is a good article, but you are missing a key point. How many jobs did the program create. You mentioned 8 out of 10 found employment. How many are enrolled? - Masood