Why are women working less under capitalism than communism?

The last three decades have seen a transition from central planning to market systems across Central and Eastern Europe (CEE). But over the same period there has been a consistent decrease in women’s employment. Prior to the transition, CEE countries were characterized by a relatively high employment ratio among women. Gender employment gaps were generally lower in CEE under central planning and then increased over the course of transition.

There are two potential explanations. First, central planners may have forced employment ratios above preferred levels; removing the work order system enabled households to adjust employment downwards. Second, the work order system and provision of caring facilities in the communist era lowered both the barriers to entry and the opportunity costs of women working. 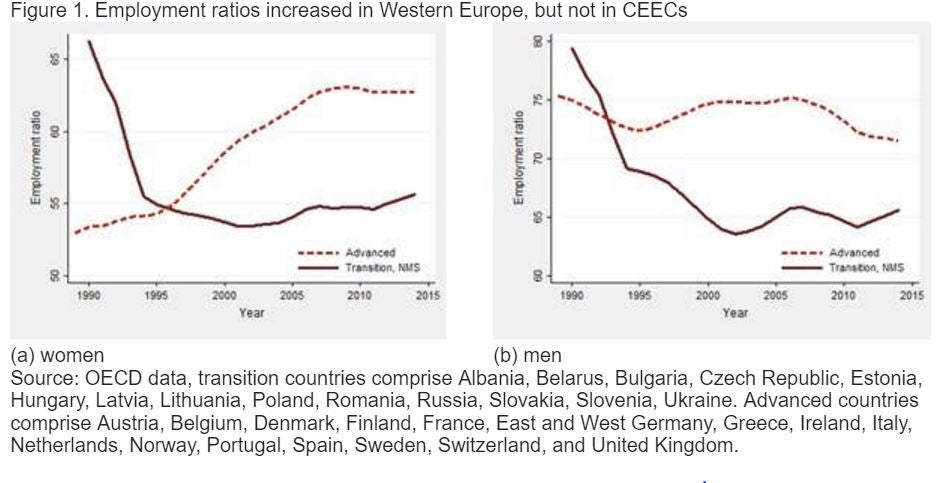 In contrast, in Western European countries over the same period there were increasing numbers of women, of all age groups, working.  In the transition economies, the majority of the drop in rates of women working was due to fewer younger women entering the labor market. One reason behind this was because more of them were enrolling in tertiary education. This process was coupled with another striking phenomenon: the youngest cohorts faced substantially lower gender employment gaps relative to youngest cohorts of men.

The reduction in employment among the youngest cohorts suggests that the opportunity cost of working may indeed be an important factor. The opportunity cost of working stems from care giving, which women are more likely to do than men. Thus, it may be proxied by fertility rates and access to institutionalized care. Indeed, we find that these factors are related to higher gender employment gaps, after accounting for women’s educational attainment. However, this relation holds mostly in advanced economies. In transition economies these effects are weaker or even non-existent.

By contrast, the opportunity cost of not working stems from foregone earnings, and it is especially high if one has invested in human capital. Thus, proxies for this cost include, for example, tertiary attainment among women. Although returns to human capital reduced the adjusted gender employment gaps in advanced economies, it is not the case in transition countries. Actually, gender employment gaps increase with labor productivity in transition countries. Even more strikingly, while in advanced economies a higher labor force participation of women is associated with a decrease in adjusted gender employment gaps, this effect is substantially less important in CEE.

Policies that lower the cost of working such as improving access to affordable care and increasing the cost of not working such as education do reduce gender employment gaps. However, the experience of transition countries adds some caveats and provides valuable insights. The data suggest that higher employment rates under central planning reflected lower institutional barriers for women’s work.

Moreover, the high employment rates among older cohorts already in the course of transition shows habit formation, which does not seem to be transmitted inter-generationally. Family-friendly institutions are not enough to reduce gender employment gaps in this part of the world. Central and Eastern European countries continue to respond only weakly to the changes in the opportunity costs of employment. Policies that lower the opportunity costs of working and increase the costs of not working may not be highly effective. Indeed, improvement in the employment rates in advanced European economies has been achieved mostly by reducing the unemployment and prolonging the activity of older cohorts, none of which was likely to be affected by pro-family or educational policies.