Women in the changing world of work: Not just more jobs but better jobs for women

This year’s International Women’s Day “Women in the Changing World of Work: Planet 50-50 by 2030” places great emphasis on equality and economic empowerment. When countries give women greater opportunities to participate in the economy, the benefits extend far beyond individual girls and women but also to societies and economies as a whole. Addressing gender gaps in accessing good quality jobs is not just the right thing to do from a human rights perspective; it is also smart economics.  A recent study shows that raising labor participation of women at par with men can increase GDP in the United States by 5 percent, in the UAE by 12 percent and in Egypt by 34 percent.

And while addressing gender gaps in labor force participation rates remains a key concern in several countries, it is even more critical to focus on the quality of the jobs to which women have access, if these jobs are to be transformative for women’s empowerment. Having good quality jobs that are stable, decent, secure and productive is especially important from a gender perspective because women are more likely than men to be over-represented in low paying, part-time, informal and low productivity jobs.   They tend to run enterprises in less productive sectors and are more likely to do part-time and temporary jobs with fewer avenues for advancement, than men. Women are particularly concentrated in the more “invisible” activities, such as domestic labor and unpaid work  or work in the informal sector in jobs that lack security and are not covered by labor laws.

There is a significant gender gap in earnings and wages, even after controlling for industry and occupation. Women on an average earn between 10 percent and 30 percent less than working men but there are large variations between countries. The recent UNHLP Report on Women’s Economic Empowerment concludes that the unexplained gender pay gap reveals gender discrimination. If men and women were equally remunerated according to observable labor market characteristics, the gender wage gap would nearly disappear or even reverse in many countries. 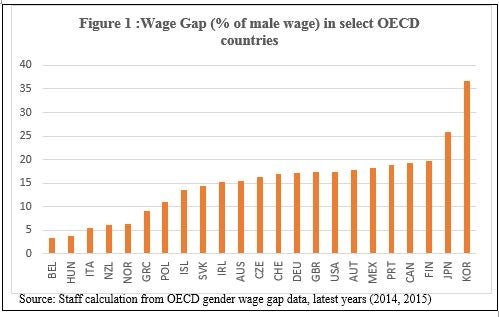 One of the key factors contributing to the pay gap in wage work is occupational segregation. Women and men earn different wages primarily because of different types of work that they do. In almost all countries, women are more likely than men to engage in low-productivity activities. They are also more likely to be in wage or unpaid family employment or work in the informal wage sector. In formal employment, they concentrate in “female” occupations and sectors. These patterns of gender segregation in economic activity change with economic development but do not disappear.

There are multiple deprivations and constraints that underlie gender inequality in the world of work. As the burden of child care and elderly care almost always falls disproportionately on women, it further segregates women into low-paying, part time jobs.  Part-time jobs may promote women’s labor force participation, but not necessarily their access to better quality and higher paying jobs. 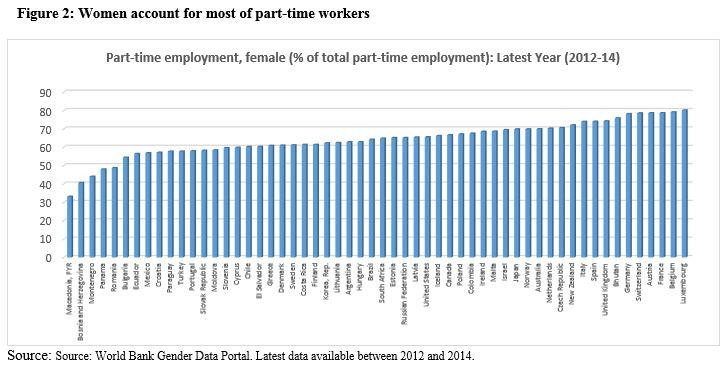 And while progress has been made in education enrollment, the quality of education that men and women receive still differs. Women are typically underrepresented in Science, Technology, Engineering, and Mathematics (STEM) that usually provide pathways to better-paying job s; even though there is little evidence that women underperform in STEM subjects. This reinforces women’s segregation into jobs that offer limited earning potential.

In addition, sexual harassment both at work and also while traveling to work is a major barrier to women’s access to job opportunities. Poor working conditions not only reduce the quality of jobs but also push prospective female workers away from the labor markets and curb companies’ ability to retain skilled and experienced workers.

Limited access to assets and property rights limits women’s ability to start or grow a business. Moreover, they face several legal, regulatory and societal constraints that undermine their agency and voice.

So what are some potential solutions? A call for gender-smart job strategies.


Reducing constraints and ensuring equitable access to quality jobs for women will require focused and targeted action. It will require a long-term commitment from both public and private sectors – resulting in greater pay-offs for growth, development, and shared prosperity for all. It was a really wonderful post that you have provided for us. it can be used for many women who looking for a job at home. thanks for sharing.

These ideas for housewives and stayed at home moms are really wonderful and useful. Thanks for sharing this post.

Really interesting. This article genuinely has more information and Women can begin their career, this will truly inspire them to take a step forward
If you are interested to look at the relatable blog
https://shetek.net/blog/meet-the-power-team-dr-chitra-dorai/