We recently undertook a Jobs Diagnostic in the Kyrgyz Republic to help the country move away from a migration-led development model. The jobs challenge in the Kyrgyz Republic extends beyond creating more jobs.  The country also needs better jobs in terms of higher productivity and wages.  Many Kyrgyz have moved abroad to find jobs. The incomes of these migrants and the remittances they sent allowed the country to pull itself out of the deep economic collapse following independence. But the country now needs policies that allow these workers to stay home.

The Kyrgyz Republic’s migration-led, remittance-driven development model has weakened the country’s ability to create good jobs. Domestic job creation has become increasingly low-value added. It is mainly concentrated in small informal activities in construction and trade.  As a result, wage growth since 2009 has trailed other CIS economies, averaging less than 3% a year.  Output per worker has risen by less than 1% a year since 2009.  Worker productivity has been stagnant in recent years which means that prospects for real wage growth are poor.  As a result, poverty rates have remained stagnant since the late 2000s, and income per capita growth in the Kyrgyz Republic has trailed all other CIS countries.  In 2003, income per capita in the Kyrgyz Republic was about 30% of the CIS average; by 2014 it had fallen to 23%. 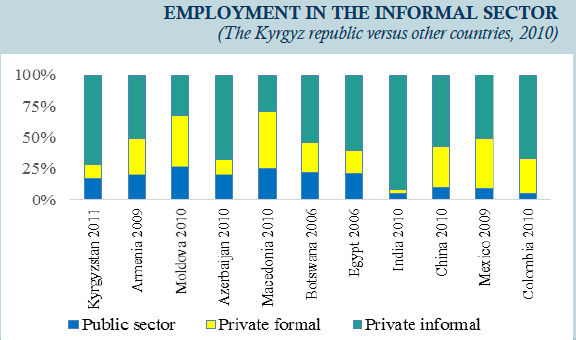 The Kyrgyz Republic needs to unwind its migration-driven jobs model and improve domestic job creation. In particular, the formal private sector has the potential to generate higher-quality jobs. To do so it needs to remove these firms’ barriers to growth.  An analysis of firm data shows that there are a few dozen very large enterprises that dominate overall growth. But these firms face few competitive pressures and have limited incentives to create jobs.  These handful of large enterprises have about 10 times the access to bank finance as other firms and 30 times the access to budgetary finance. They operate in industries with few competing imports, and they exhibit large economies of scale.

Small firms, on the other hand, rarely grow because once they become medium sized firms, they incur significant costs. They are further held back by a complex and burdensome regulatory environment, especially in tax administration. The tax regime, including the patent system, encourages small-sized firms to stay small instead of expanding beyond the tax incentive threshold. Medium-sized firms also face additional payments for labor insurance and social security. They confront significantly more government regulation than small or large firms. They face additional costs associated with compliance, and they face the highest incidence of graft payments in the operation of business. In short, so many burdens are associated with growing that few small firms are motivated to grow or even formalize.

Emigration and remittances have been a lifeline for the Kyrgyz Republic, with money being sent home from outside of the country now accounting for more than 32% of gross domestic product. Remittances have been instrumental in reducing poverty, particularly in the poorest regions of the country. But as our recent report shows, this lifeline is showing signs of strain.

Even so, Kyrgyz workers continue to choose to look for work outside the country. Household data suggests young workers are increasingly working abroad rather than finishing school. This is a choice particularly prevalent among poor workers. Between 2003 and 2011, as labor force participation increased for poor youth, the proportion with incomplete secondary education grew from 5% to 11%. 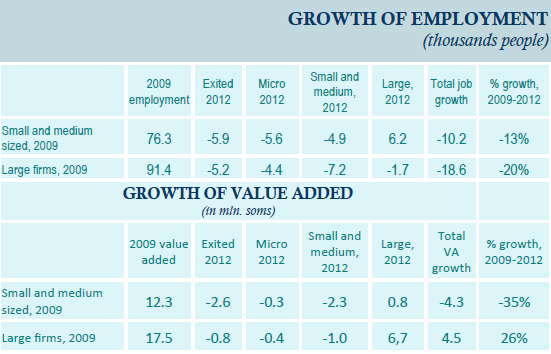 Improving domestic job creation in the Kyrgyz Republic will require efforts on many fronts. In particular, small and medium sized firms need to survive and grow. Making firm entry easier in key job-creating sectors such as manufacturing is necessary for sustainable growth. A thorough assessment of the inequalities in bank and budgetary finance, levels of protection, and economies of scale between large and small firms can help create a more level playing field. This will stimulate job creation among firms of all sizes. The range of policy challenges for the Kyrgyz Republic is large, but so too are the stakes for Kyrgyz workers.