Counting charcoal trucks by the side of the road in Haiti

Across the world, over 3 billion people cook with solid biomass over traditional stoves resulting in negative impacts on health and the environment.  In Latin America this number is around 90 million people.

In this blog, I want to focus on the case of Haiti, where 93 percent of people (2.2 million households) cook with solid fuels and some 80 percent of urban households use charcoal as their primary cooking fuel. This fuel has implications on health – burning charcoal exposes cooks and family members to harmful Indoor Air Pollution (IAP) like PM2.5 and others – and on the environment, especially forests, since charcoal is made from wood.

As far back as the 1970s projections suggested that supplies of wood for charcoal would only be enough to meet increasing demand until the year 2000, based on the logic that a growing urban populations’ demand for more charcoal, and a diminishing forest cover would not permit the continued use of charcoal. And yet, some 40 years later, Haitians continue to produce increasingly larger quantities of charcoal to meet more than three quarters of the urban cooking demand, year after year.

But where is this charcoal coming from? And how does it just keep coming?

A new national research report entitled, “Charcoal in Haiti: a National Assessment of Charcoal Production and Consumption Trends”, conducted in Haiti between 2016-2018 by the World Bank, the nonprofit organization J/P HRO and the Haiti Takes Roots Initiative, tackles these questions:

Charcoal is primarily consumed by urban populations without access to lower-cost fuelwood from wooded areas. The research tracks the actual volume of charcoal traveling into Port au Prince over different periods in 2017.

Port au Prince—with a population of over 2.6 million, or approximately one-fourth of Haiti’s entire population and dwarfing the next largest urban centers of Gonaives (356,000) and Cap-Haitien (274,000—is the largest charcoal consumer in the country.

During three time periods covering low season and high season of charcoal production (August, October and December) 69 enumerators were set-up at 23 different roadside stations for continuous 24-hour monitoring to count passing trucks. During the data collection, these enumerators logged a total of 384 hours of observations totaling 10,404 unique enumerations of charcoal vehicles heading toward the capital.

That is in fact equivalent in weight to over 90,000 medium-sized African elephants!

Considering the price of charcoal, these astounding flows place the product as the second-largest agricultural value-chain in in Haiti, second only to mangoes.

The research also finds – contrary to some popular perceptions – that very little of this charcoal is coming over from the Dominican Republic, estimating that only 2.28 percent of the total charcoal consumed in Port au Prince comes from its neighbor.

The report underscores 2014 evaluation of forest cover estimates for Haiti showing that forest coverage in Haiti is significantly higher than previously believed – covering approximately 30 percent of the land surface.

The convergence of these three things – over 400,000 metric tons of charcoal flowing into Port au Prince, nearly all of which originates in Haiti, and a persistence of a forest cover equating to nearly a 3rd of the surface area of the island – suggests that at least some portion of the charcoal presently produced in Haiti is made with renewable biomass resources. 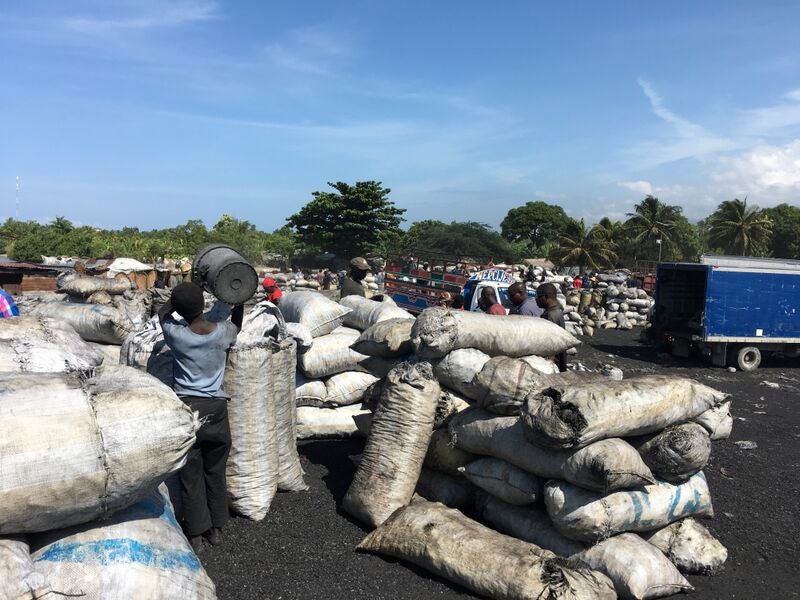 This fact alone changes the dialogue around charcoal.  Typically thought of as the major driver of deforestation in Haiti, the production of charcoal from renewable biomass resources means that charcoal production in Haiti is, at least in part, sustainable. Changing the narrative presents opportunities for investments in agriculture and natural resource management to improve planning and practices for charcoal value-chains.

Charcoal remains an undesirable cooking fuel choice for health reasons.  However, despite targeted investments in the cooking fuel sector, Haiti’s movement up the fuel ladder is happening slowly, meaning it is unlikely that Haiti will reduce its reliance on charcoal anytime in the near future. Investments in improving the sustainability of charcoal will help to minimize the impact on the environment while Haiti strives for cleaner, better fuels to meet the increasing demand of its growing population. Dominican Republic have 43% of forest cover. It is not clear how the forest cover was estimated in Haiti.

An excellent piece, which could have been written about Sub-Saharan Africa

Hi thank you so much for your article I really appreciate it. I am a Haitian and I've been thinking about my country. So does that mean most of the charcoal now is not made with real wood? What's one of the products that they use?