Medellin: A model for cities worldwide 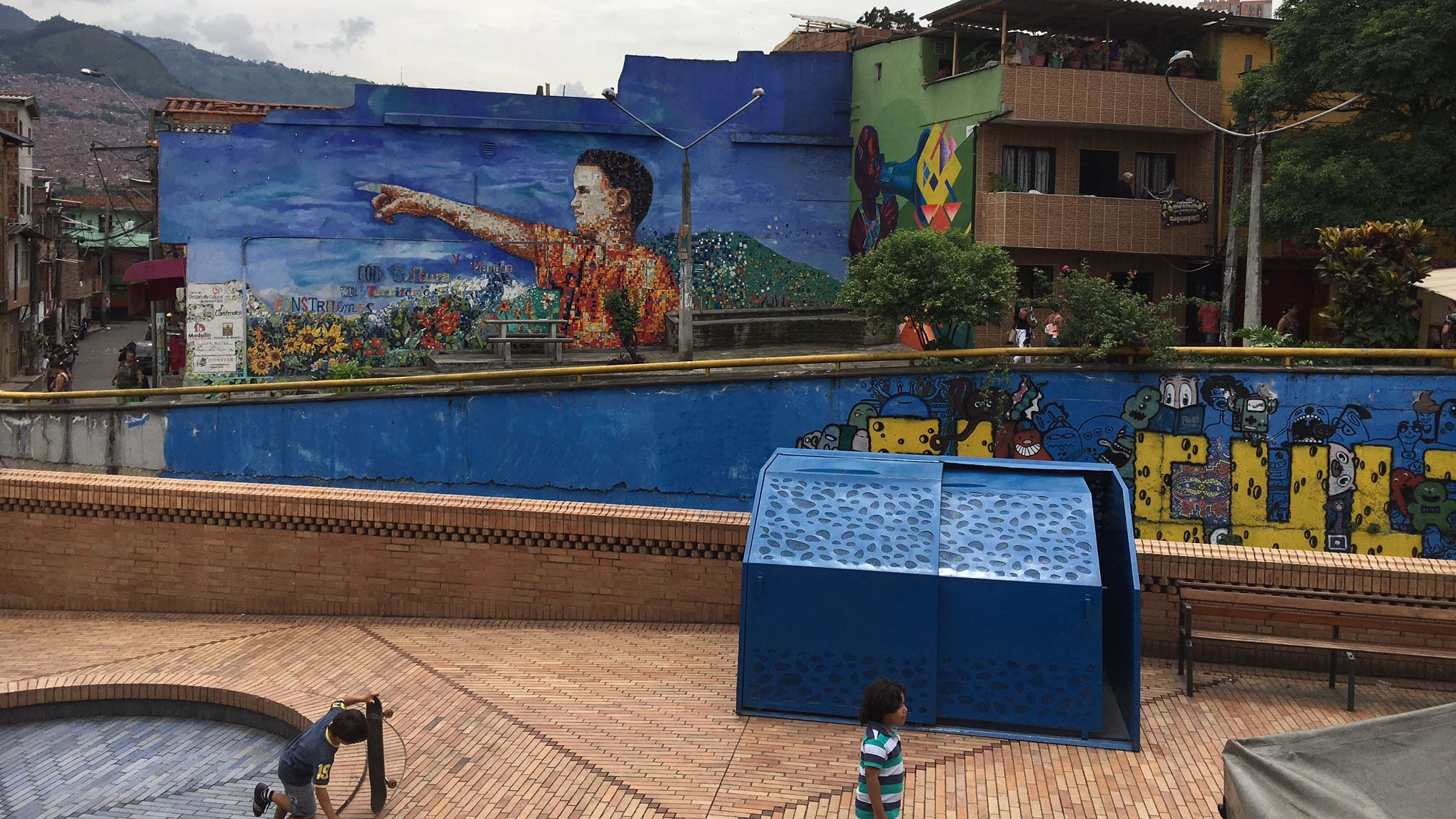 “Comuna 13 (one of the poorest areas in Medellin) has gone from being a marginalized community to being a resilient one. Many interventions that are being implemented for the youth and adults allow them to have a better life. All of this generates spaces where one can see that the transformation brings love, happiness, and liveliness, which all contribute to have a better future.” – Peter Alexander, Community Leader

If all you know about Medellín is its troubled past, you’re in for a surprise. Medellin has been known as a violent city not only in Latin America but throughout the world. During the 1980s and 1990s, Medellín was considered one of the most dangerous cities in the world and the epicenter of the global drug war.  In 1993, Colombia's homicide rate was 420 per 100,000 – the highest in the world. Medellin witnessed 6,349 killings in 1991, a murder rate of 381 per 100,000 people.

The homicide rate in the city of Medellín has since fallen more than 80%. By 2015, it was 20 per 100,000 people, the lowest in decades. Today, Medellín is a progressive city, setting a global standard for urban development. Its residents have worked tirelessly to reduce urban violence and in the process have built a safe and resilient place to live. In my experience traveling to cities across Latin America, Medellín is one of the friendliest and most vibrant cities in the region.

The city has successfully implemented an integrated and multi-sector approach that includes a combination of violence prevention programs and a deep commitment to build a prosperous, inclusive and livable city.  As a result, Medellín’s urban transformation and social resilience attracts intense interest from other cities around the world.

For this reason, the city of Medellín, in collaboration with the World Bank, USAID, and the Rockefeller Foundation’s 100 Resilient Cities network, decided to organize the “MedellínLab” to present lessons from its recent efforts to reduce violence and share different methodologies to improve security, coexistence, and resilience. Organized by Medellín’s International Cooperation and Investment Agency (ACI), the “Living Lab" was held from May 29 to June 2, 2017 and brought together representatives from more than 35 cities in a unique experience for knowledge sharing. Participants from the United States, Mexico, Argentina, Brazil, Chile, Dominican Republic, Saint Lucia, Guyana, El Salvador, Guatemala, Honduras, Jamaica, Nicaragua, Venezuela, Uruguay and Colombia came together to learn about Medellin’s obstacles and remarkable successes in reducing urban violence. The MedellínLab highlighted critical components of social resilience, while recognizing that the transformation from the Medellin of the early 1990s to the Medellin of today was not a linear process.

Participants also engaged with the communities and one and another and saw the different neighborhoods and representative places of the city where security and coexistence issues have been of special relevance, such as the Metro de Medellín, Comuna 13 (the electric stairs), La Loma, and El Morro, among others. Participants also engaged with local communities once displaced by violence and civil unrest.  Today, these areas such as Comuna 13, La Loma, Jardín Buen Comienzo, and El Morro represent the transformative process from the city of old to the city of new. The Metro de Medellín is not only important for infrastructure, it also serves a symbolic purpose.

Affecting change in Medellín begins with community involvement. Participants were struck by the impact of civic engagement, particularly with the Jardín Buen Comienzo program. Jardín Buen Comienzo, sponsored by the Mayor’s Office of Medellín, provides comprehensive care for children during their first five years, while promoting autonomous development of children. According to Xenia Lopez, Director of National Prevention Programming in El Salvador, the program was formidable and something that could be used in El Salvador as a blueprint for civic engagement. By prioritizing its most vulnerable families, Medellín is able to instill critical values in its youth. Programs such as Jardín Buen Comienzo have tangible impacts throughout the city.

The MedellínLab also visited Centro de Formación para la Paz y la Reconcilación (CEPAR). CEPAR is an institution dedicated to providing an education to residents previously either displaced or recruited by guerrilla groups. Roberto Patino, Caracas Coordinator of Mi Convive, believes that “these types of interventions that specifically target at risk populations promise the most success.”

Despite Medellín’s successes and major improvements, officials and community residents also cautioned that much remains to be done to mitigate the continuing risk of violence. The city recognizes the underlying threat of organized crime and violence. Consequently, exchanges such as the MedellínLab are not only beneficial for its international participants, but for Medellín as well. The array of strategies implemented by Medellín can be replicated and adjusted to meet the needs of other cities and countries. Conversations throughout activities during the MedellínLab often led to concrete action plans and collaborative ideas between cities, with the purpose of forming an informal network of like-minded citizens and practitioners who have a vested interest in resilient and safe cities.

The MedellínLab marks the beginning of a long-term partnership between its participants, and, more broadly, the cities represented. Today, when Medellín experiences violence and crime, the city has the tools to address the issues head on using community-based solutions.