A new path away from violence: the story of Raul 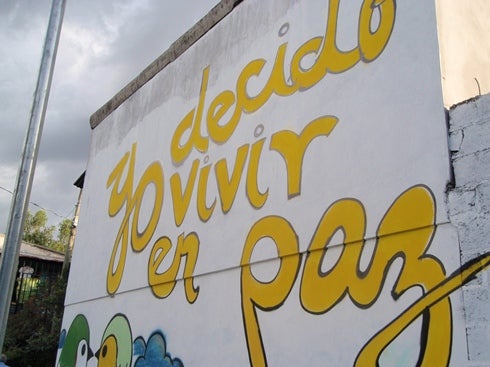 Raul is short, skinny and has an enormous smile. Looking at him, it was hard to believe that this fifteen-year-old had long been feared in his community as a gang leader and had been the author of horrible crimes in Colonia Santa Marta in El Salvador.

Like many young people in his community, the life choices that led Raul to a gang were largely the result of urban issues. The lack of jobs in the community forced his parents to commute long distances to their places of employment and left Raul unsupervised during the day.

The historical inequality of San Salvador’s infrastructure made access to basic services unreachable; and poorly lit and abandoned geographical landmarks in the community set fertile grounds for criminal activities to flourish. In this context the gang provided Raul with a safety net that filled the void many years of urban neglect had left behind.

Violence, although prevalent in different settings, is most severe and visible in urban areas. For the first time in history more than half the world’s population lives in cities, and an overwhelming 90% of this growth is taking place in developing countries. Cities are home to half of the world’s population and are expected to absorb almost all new population growth over the next 25 years.

But with all the positive changes that urban growth brings, the number of challenges also increases. Among the more worrisome is urban violence.   In the Latin America and Caribbean region, the spread and prevalence of violence has been increasing over the last decade, and its economic impacts are estimated to account for about 8% of the region’s GDP.

The homicide rates in main metropolises such as San Pedro Sula, Caracas, Guatemala City, Ciudad Juarez, and Marceio are more than double the average national homicide rates. As cities continue to grow both in size and population, it will become increasingly important that urban growth is paired with effective city planning that integrates urban and social strategies, especially to cope with urban violence dynamics.

Upon entering Santa Marta, Raul pointed out a modest basketball court; “Since we built that,” he said, “homicides dropped from 32% to 3% per month”. This fact startled me. How could a piece of jagged cement achieve such an impact? As Raul told his story, I began to understand.

A useful framework for understanding the drastic change in Raul’s community is the “Broken window theory” which asserts that degraded infrastructure and physical disorder facilitate crime because they develop a perception in the community that there is little consequence to their actions and criminal offences are less likely to be reprimanded. In Raul’s community, the basketball court took over a space that used to be an abandoned, litter-filled park –his community’s broken window - and turned it into a space for recreation the neighborhood could feel proud of. This in turn gave Raul and his community a sense of pride and value and empowered him - and others in his community- to leave the gangs.

Furthermore, the construction of the basketball court had a transformative impact in Raul’s community because infrastructural investment was integrated with citizen engagement. The process of building the court was participatory. People came together to build it, paint the fence surrounding it, and keep it safe. Suddenly, what had been an abandoned park and a hub for drug dealing was overtaken by proud community members gathering to play a sport. The empowerment and ownership that can result from involving communities in the development of the infrastructural investments within their communities – especially in historically marginalized and high crime contexts- can have drastic positive impacts in fostering social cohesion and in the reduction of violence, as Raul’s story demonstrates.

As cities grow, and the demand for public safety increases the critical factor underlying urban upgrading in communities with high levels of crime and violence must be community engagement with a sharp focus on tackling inequality.
Growth, that is not focused on equality and that continues to perpetuate inequalities through built environment is unlikely to bring about a significant reduction in violence levels. After all, it is often the physical characteristics of the built space that poor populations inhabit, which can reinforce or worsen these already persistent inequality these population face.  Urban Development efforts should be paired with the necessary social and community based programs to generate solutions that ensure the sustainable development of new and expanding cities, and the human development of its inhabitants. Just like Raul and his community have proved.
Topics
Fragility Conflict and Violence
Social Sustainability and Inclusion
Urban Development
Countries
Brazil
Colombia
El Salvador
Guatemala
Mexico
Peru
Regions
Latin America & Caribbean Junior Professional Associate at the Social Development Unit, Latin America and the Caribbean