No women, no growth: The case for increasing women’s leadership in Latin America

Latin America is up against a momentous year on multiple fronts. On one hand, game-changing national elections in six countries, including three of its largest – Brazil, Mexico and Colombia – are poised to reshape the political scenario in the region. In parallel, the economic agenda is front and center of countries’ efforts to overcome imbalances, implement reforms and accelerate growth. As a backdrop to all this, an important feminist movement is unfolding on the heels of a year marked by discussions on gender equality, with critical implications on both the political and economic spheres.

How do these connect?
Political uncertainties can affect the economy as they tend to curb foreign investment, devaluate local currencies and increase interest rates. On the flip side, fostering gender equality supports economic resilience and boosts growth. It is also critical in achieving development outcomes, as outlined in Goal 5 of the 2030 Agenda for Sustainable Development.

Latin American countries have made great strides toward reducing gender inequalities in recent decades. Women have gained a greater foothold in the labor market and in access to health. They now exceed men in years of schooling and in life expectancy rates. And women’s political participation has increased. Despite these advances, however, a wide gender gap remains. According to the Global Gender Gap Report the region still needs to close a 29.8% gender gap, which will take another 79 years.

The figures are a stark reminder that women represent about 50% of the region’s population, but account for 41% of the labor force and earn on average 16% less than men. Moreover, occupational segregation remains high and better educational achievement has not led to higher paying jobs for women. Indeed, wage disparity in skilled jobs – as high as 25.6% – continues to impede women’s economy empowerment.

The gap further widens when moving up the ladder of leadership. Only 29.3% of parliamentarians regionally are women (Figure 1), with considerably lower rates in a number of countries. And this year’s elections marathon may not accelerate progress. As of March, Latin America has no female heads of state. In 2014, however, the region boasted the largest number of women heads of state, with female presidents in Costa Rica, Argentina, Brazil, and Chile. Now, there is little expectation of achieving that again in the near future.

Gender inequality, on the other hand, carries high costs. Recent World Bank estimates show this global cost to be as high as $160 trillion, $6.7 trillion of which are attributed to gender gaps in earnings in Latin America and the Caribbean.

What can be done? Laws and policies matter
Legal gender equality is associated with a range of outcomes, including higher female labor force participation, more women in parliament, and a lower wage gap. As the Women, Business and the Law report shows, laws and policies can drive women’s economic inclusion. Beyond eliminating legal discrimination, affirmative-action policies, including quotas, can level the playing field. Indeed, in Latin America women’s political participation was largely driven by gender quotas and parity laws.

In 1991, Argentina pioneered the movement, introducing the first ever quota law for female representation in Congress. Other countries have since followed, with positive results. Across the region, 19 countries have so far adopted some form of legislative quota for women (Figure 3), eight of which have shifted to parity regimes – requiring 50/50 gender representation. Four of these – Bolivia, Nicaragua, Costa Rica, and Mexico – are among the top 10 countries worldwide in female representation in national parliaments. 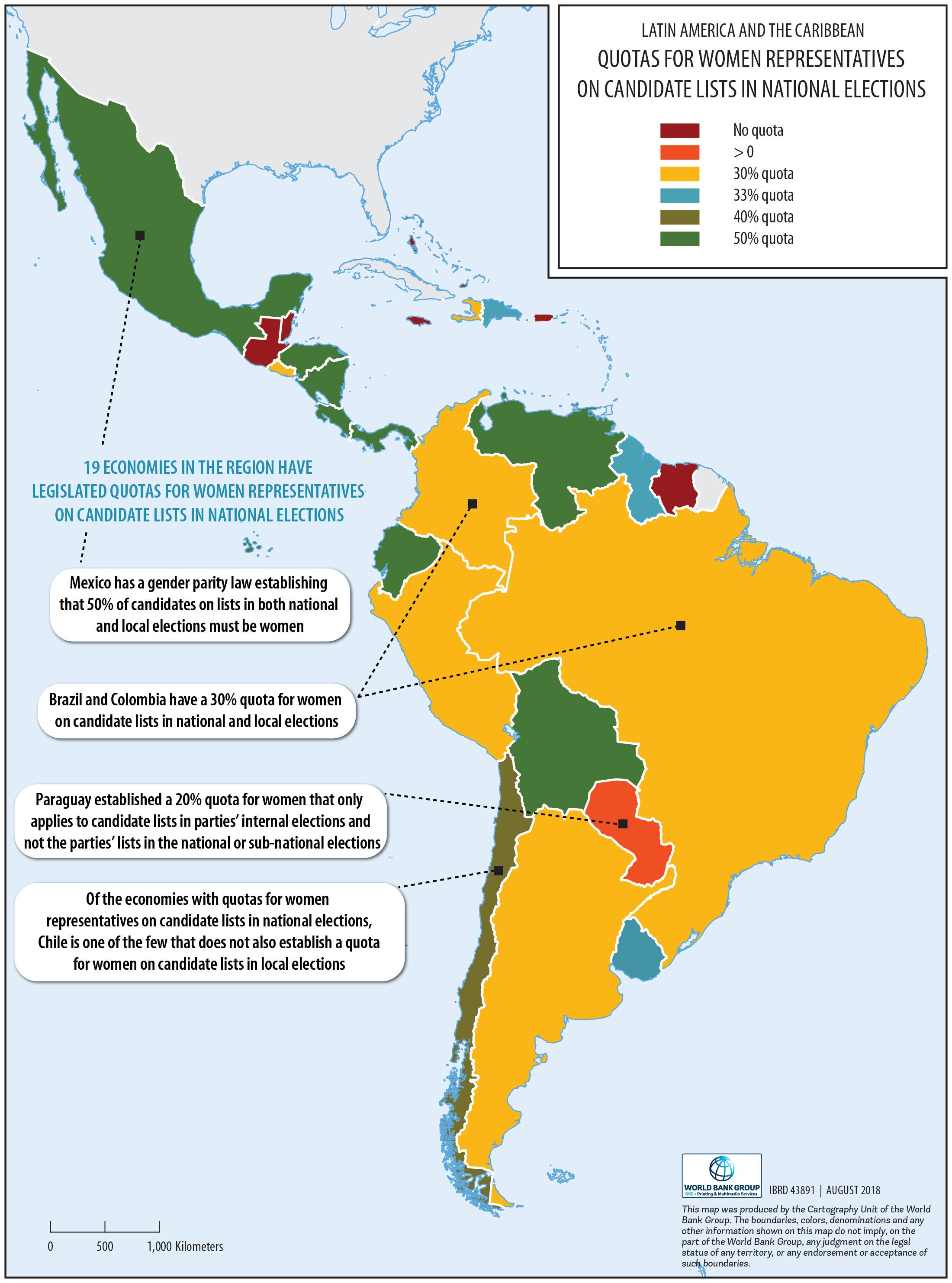 Quota laws carve out a space for women, but by themselves are often insufficient. Differences in quota systems may affect outcomes. In Bolivia, where women’s representation in the national assembly is over 50%, a zipper system requires political parties to alternate genders on candidate lists. Failure to comply results in rejection of the party list. In Brazil, 30% of candidates must be women, but those elected are far fewer. Brazil’s poor performance is in part attributed to its quota law, whereby no rules exist for favorable placement of female candidates on lists. Beyond establishing electoral quotas, laws allocating budget to female candidate campaigns – such as was recently regulated in Brazil – and establishing reserved seats for women may serve to effectively increase female representation.

Opportunities for women leaders have improved. The recent turnout in Mexican elections this year is an achievement for women’s political participation. Come December, when the new congress sits, Mexico will be the only country with a majority female elected senate. And Colombia has just elected its first female vice-president.

However, more is needed. Laws and policies promoting women’s empowerment can affect their opportunities. With so much evidence on female leadership being key to closing the gender gap – which in turn is key to economic growth –  let’s hope this year, with so much at stake for political and economic prospects in the region, can also be one to boost gender equality.