“We are running out of time”: Caribbean citizens and leaders raise their voices in the face of climate change Every day, Caribbean countries are already living the effects of changing climate.  As storms and natural disasters becoming more frequent and severe, the small island nations have embarked on a quest for becoming more resilient to climate events and other economic shocks. The 2017 Hurricane season was the most devastating season on record in terms of cost. For many, it was a stark reminder of how the entire economy of a small nation can be wiped out in a few hours and everyone on the island gets impacted.

As we launched a twitter poll on @WBCaribbean to ask followers what is the greatest risk faced by the Caribbean today? 45% of the Twitter users answered that “natural disasters are the most relevant threat”, followed by climate change (32%) and high debt (23%). 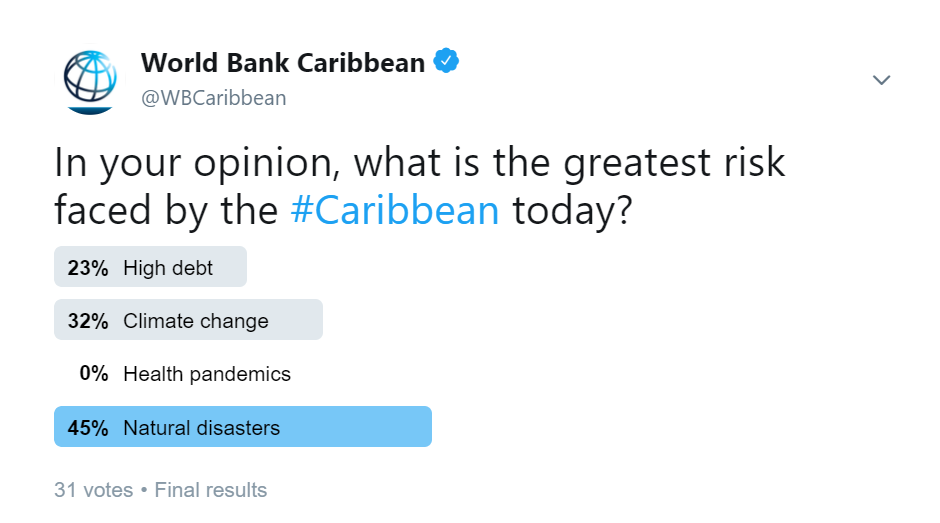 Even though a Twitter poll might not provide a representative sample, the results echo the opinions of the leaders that recently gathered in Washington for the Caribbean Resilience Conference.

A call for increased partnership and support 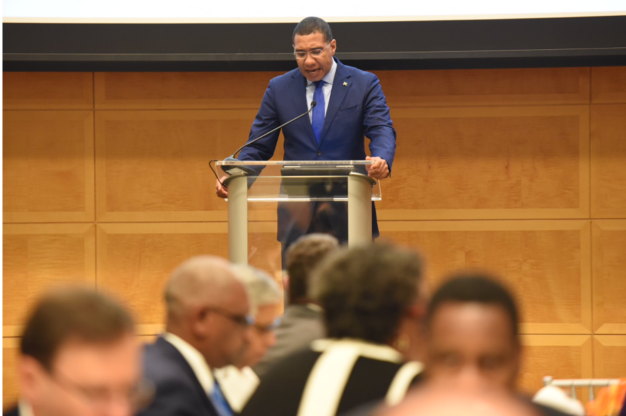 Ahead of the UN Climate Summit, Caribbean leaders and partners discussed in Washington during a Resilience conference hosted by the World Bank, the IMF and IDB, the need to shift the focus of policies towards building resilience and innovative disaster-risk financing policies and instruments in the face of the growing threat of natural disasters.

For Jamaica’s Prime Minister Andrew Holness, “The biggest takeaway from the story just now, is that with the multiple of climate related threats and impacts facing us as small islands, there will be no one correct solution to building resilience.”  Holness added: “This will require increased partnership and support, as well as using existing support more effectively and making new resources available for us to build the required resilience at the country, community and personal levels.”

“We are running out of time”

For many Caribbean leaders like Barbados Prime Minister Mia Mottley, urgent decisions must be made by all the affected small island states if the region is to create economic resilience.

“We are running out of time. We have some urgent decisions to make to be able to create resilience in our economies, to be able to create financial resilience. Many of our countries are facing difficult economic situations anyhow. But when you add to it the climatic conditions that will become more intense and more often, these threats undermine states that are extremely vulnerable,” highlighted PM Mottley.

“We must be able to bring all the parties to the table to see how we can create financial instruments that can make sense to help us get through these difficult times. There is a new normal,” she added.

“The livelihoods of our citizens are all at stake”

Overall, Caribbean leaders and @wbcaribbean followers seem to agree that strengthening the economy is one of the steps to build resilience. 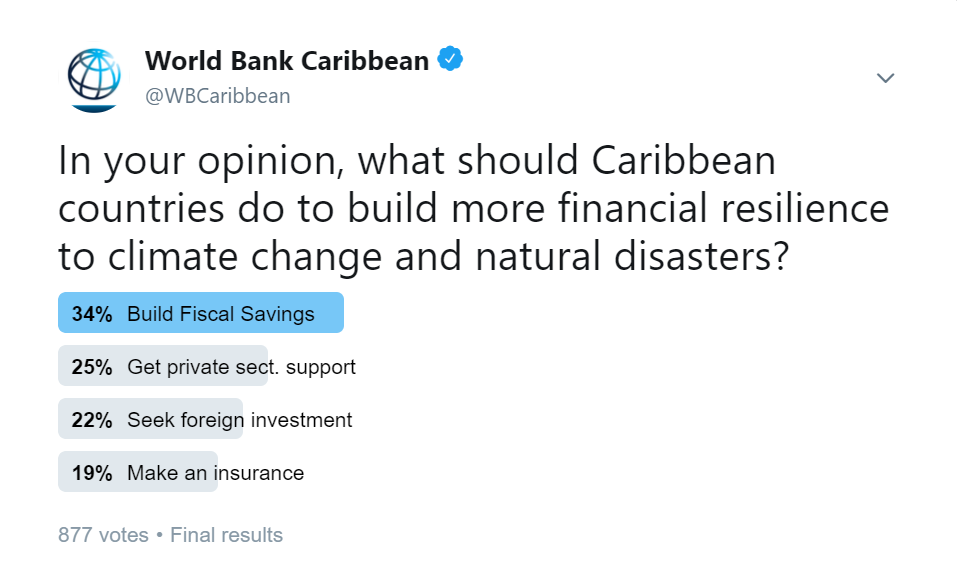 For Saint Lucia Prime Minister Allen Chastanet, the Caribbean must find a balance between building fiscal and infrastructure resilience. Otherwise, the economic viability of the region will be undermined.

“First of all, there is a huge need. The absence of being able to build resilience and right now we are really talking about physical resilience, so it’s your basic infrastructure. If we don’t do it, it’s going to undermine the viability of our economy... The livelihoods of our citizens are all at stake,” noted PM Chastanet during the conference.

As world leaders meet for the 24th Session of the Conference of the Parties to the United Nations Framework Convention on Climate Change (COP24), the World Bank Group announced new climate targets for 2025, including a major boost on climate adaptation. In this context, Caribbean countries are well placed to build on this momentum and take a collective approach to improve resilience and adaptation in the region.


Related Blog: A Carribean crystal ball: What can experience from Caribbean islands tell us about investing in climate resilience?