Climate Impacts on African Fisheries: The Imperative to Understand and Act 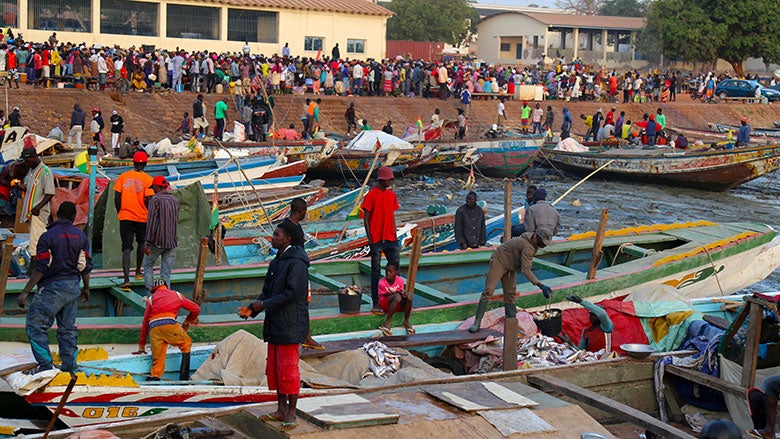 The impact of climate change on hydrology and other natural resources, and on many sectors of African economies—from agriculture to transport, to energy—has been widely researched and discussed. But its effect on marine fisheries, an important economic sector and significant source of food for large numbers of people in Africa, is less well understood.

First, what is known?

In East Africa, ocean warming has already destroyed parts of the coral reef where certain species live, and reduced fish stocks. In some West African countries, such as in Sierra Leone, rising sea levels have resulted in the flooding of coastal zones, deepening the vulnerability of coastal populations.

Globally, it is predicted that climate change will reduce fish catches by 7.7 percent and revenues from it by 10.4 percent by 2050 under a high CO2 emissions scenario (Lam, Cheung, Reygondeau, Sumaila, 2016). This decrease in the catch may be as much of a drop as 26 percent in some parts of West Africa, and could be even higher for in other parts of West Africa countries closer to the equator: a 53 percent drop in fish in Nigeria, 56 percent in Cote d’Ivoire, and 60 percent in Ghana.

More than 12 million people are engaged in the fisheries sector in sub-Saharan Africa, according to the World Bank, with remarkable employment multiplier effects: for every fisherman’s job, 1.04 additional onshore-jobs are created in Mauritania, and 3.15 in Guinea.

However, the fisheries sector has been under pressure from over-fishing—the result of weak governance and illegal fishing—a situation now compounded by the impact of climate change.

Urgent action is needed both to respond to the impact of climate change and improve the sustainable management of African fisheries. Without this, the volume of fish available for consumption in sub-Saharan Africa is expected to decline at an annual rate of 1 percent—or 5.6 kilograms per person per year—by 2030, and the ripple effects for communities relying on fisheries for food, jobs, and wealth creation could be even larger, causing acute vulnerability (due in part to weak adaptive capacity).

What needs to be done?

To prioritize cost-effective options and guide investment we need to understand the scale and extent of climate impact better. The World Bank has invited partners to take stock of what is known, identify knowledge gaps, and come up with options.

The African Union has recently endorsed a plan to launch a regional study assessing the impact of climate change on Africa’s fisheries, as well as looking at the policy implications of it. The study would be done by the World Bank in coordination with the UN’s Food and Agriculture Organization, and in consultation with countries and clients.

The study will map the extent of vulnerability across Africa’s coastal zones; assess climate change-driven risks, basing it on biophysical and socioeconomic analysis; estimate the cost of inaction and the limits of implementing mitigation and adaptation measures; and identify options for intervention that could truly boost the potential of Africa’s fisheries.

Meanwhile, investing in improved fisheries governance and management, in livelihood support for fishíng communities, and in measures for increasing coastal resilience remain a high priority for African coastal economies. Country-specific projects and regional programs, such as the West Africa Regional Fisheries Program and the South-West Indian Ocean Fisheries Program are already doing this.

These efforts need to to grow for the benefit of millions of people in Africa.