Flooding and a Changing Climate in Mozambique 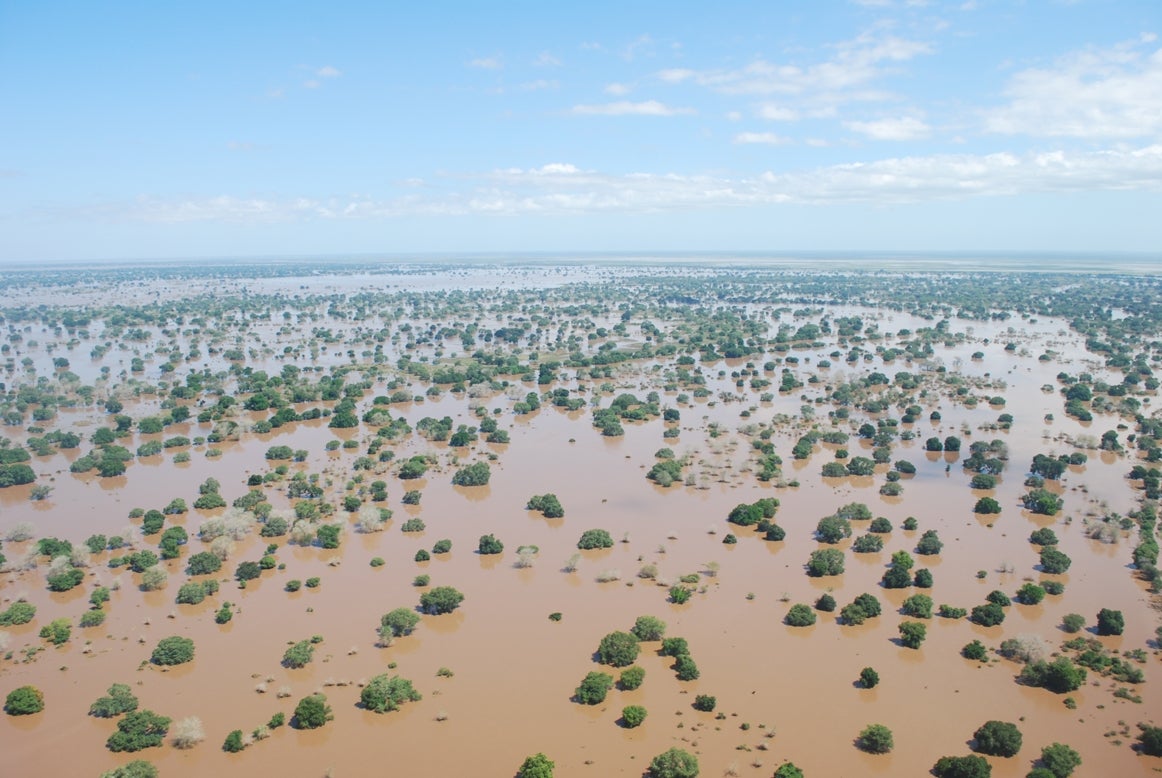 Here in Mozambique, the rainy season has brought disaster for as many as 110,000 people living in the Limpopo Valley, as surging water over recent days has flooded their crops, capsized their towns and villages, and forced their evacuation to higher ground. Forty people are believed to have died in the floods so far. It’s expected that as many as 150,000 people may ultimately be affected.

A UN reconnaissance plane that flew over the Valley on Monday took photos of mile after square mile of crops and farm land under brown muddy water, a result of the Limpopo River and others nearby bursting their banks.  It's at times like this that you really appreciate the powerful humanitarian role of the UN.

Mozambican President Armando Guebuza quickly went to the scene to see for himself how the flooding had turned communities upside down.

Talking with people from the town of Chokwé and surrounding areas at an emergency shelter, the President said, "we are with you, we weep with you, because we know that you have lost many of your goods including your houses, your goats, your cattle and much that is of great value." 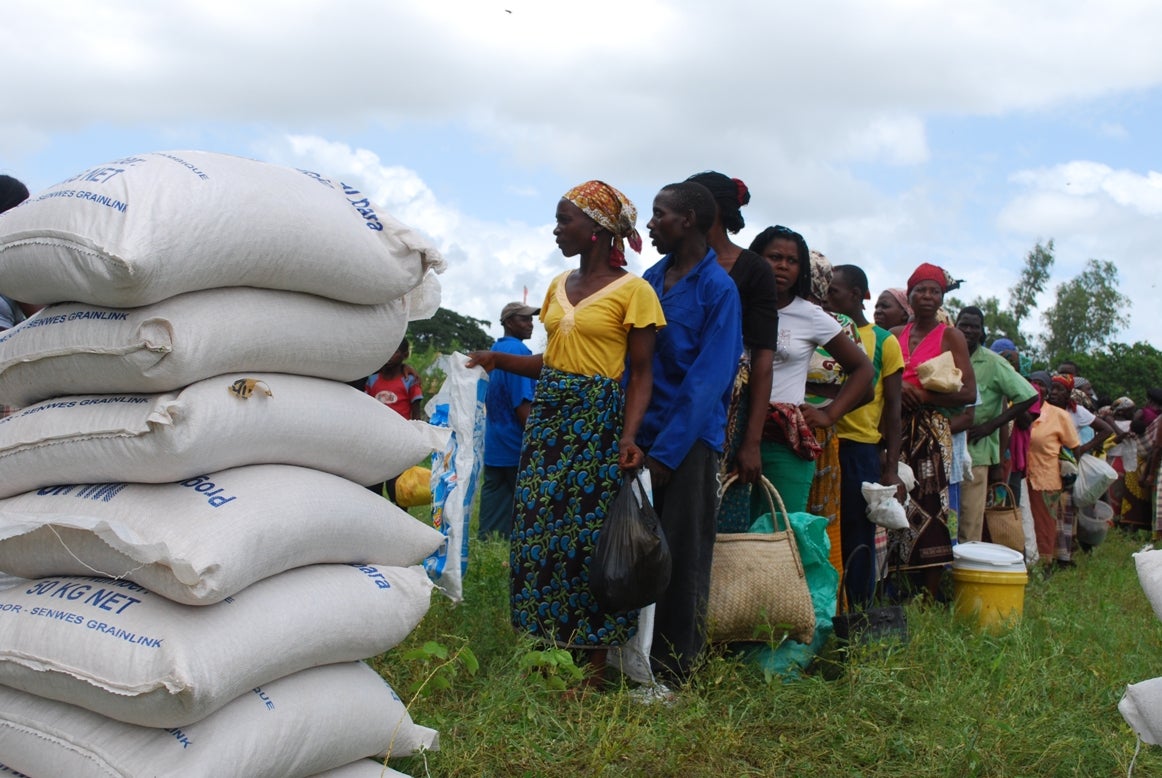 Historical records from 1960 to 2005 point to a warming trend in central and north Mozambique of 1.1-1.6o degrees Celsius and by 2040-2060, maximum temperatures are expected to increase by 2.5-3.0oC in the country’s interior. More intense droughts, hurricane-strength cyclones, unpredictable rains, floods and uncontrolled fires are expected to increase as the climate changes.

And rising sea levels, especially during the rainy seasons, are eroding the shoreline in Mozambique and elsewhere along Africa’s 16,000 miles of coastline.

Further south in Maputo, well away from the inland flooding, you get a snapshot of that erosion along the Costa do Sol at Marginal, where the sea washes up against a shoreline increasingly fortified with huge stones and concrete sea walls. At one time, Maputo city leaders planted hardy Casuarina trees to shore up the land banks above the water line. But even they were eventually nibbled away by the sea, leaving their vast root structures gaunt and hollowed out, and now protected by a sea wall that was quickly built last year.

Walking along the shoreline past families playing in the ocean and enjoying the shade of the Casuarinas, you can see that one of the recent sea walls is already lurching sideways, a constant reminder of the ocean’s persistent watery strength. A short distance away, outside a new up and coming housing settlement, the recent heavy rains washed away a complete stretch of newly built-road, and now it’s back to square one to rebuild the drains and culverts.

It’s not surprising given the flooding and the constant erosion of Mozambique’s coastline that sustainable, climate-resilient development is now a leading priority for the World Bank Group as President Jim Yong Kim declared in a recent speech to the World Economic Forum in Davos and in a recent op-ed in The Washington Post. Climate and

On his first official visit to Mozambique as the World Bank’s Vice President for Africa, Makhtar Diop arrived in Maputo on Tuesday and pledged immediate relief to the government to help the affected areas get back on their feet, and to help fortify Mozambique’s wider resilience to climate change.

Late last week the World Bank mobilized US$50 million dollars in zero-interest financing for general climate resilience in Mozambique just as the flood waters in the Limpopo Valley started cresting. Diop assured President Guebuza and key ministers that they can use the money fast and flexibly to help families and communities recover from the devastating floods. He also encouraged the Bank’s office in Maputo to restructure existing development projects to raise even more money for the flood relief if the government needs it.

The list of next steps for Mozambique looks intimidating. Roads, bridges, water systems, and other key infrastructure have been washed away and will need rebuilding. A key step will be rebuilding the levees in Chokwé and Xai-Xai. Schools will need to be rebuilt and farmers will need to start a second growing season for rice and maize as soon as they can.

Mozambique’s Agriculture Ministry says that about 3% of the country’s cultivated land area has been lost due to the floods. Diop offered his personal commitment to government leaders that he and his team will stand shoulder to shoulder with the country as it begins the difficult process of rebuilding.

Across the continent, it will be crucial that African voices are heard in the global debate over climate change. Diop especially wants to encourage African leaders to put their climatic reality of drought, floods, hunger, and political instability more immediately and vividly on the worldwide climate agenda. He also wants to ground the reality of what climate change means for Africa in the day-to-day impact it is having on people’s jobs and livelihoods, the food they can grow and the quality of the water they drink, and whether they have electricity in their homes, schools. and health clinics, from the baked lands of the Sahel and Horn of Africa to the arid lands of Kenya, the flood plains of Mozambique and Zimbabwe, and down to the embattled coastline of the southern continent.

For more information on the World Bank Group’s work in Mozambique, visit
http://www.worldbank.org/en/country/mozambique

For more on the World Bank’s Climate Change work in Africa, visit http://go.worldbank.org/PLCPCNBSW0 Great showcasing of the problem which gives a lot of justification for Makhtar's visit to Mozambique and for his dialogue on this among other developmental subjects and challenges facing Mozanbique.