Fragile states, an opportunity to deliver lasting security and development 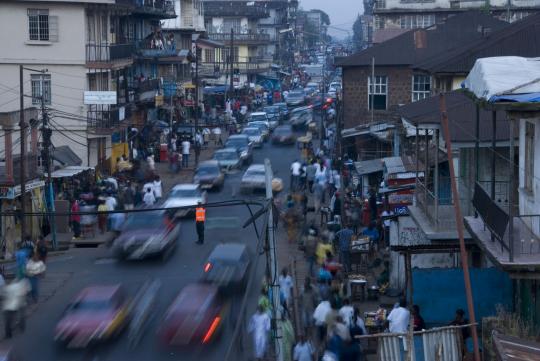 Next week, I will be joining World Bank Group President Jim Yong Kim and UN Secretary-General Ban Ki-moon on an historic joint visit to Africa's Great Lakes Region. The aim of the trip is to brainstorm with African leaders solutions to helping the people of the Great Lakes prosper.

This visit is important for two reasons - it highlights a new era of global institutions working together to promote stability, and it signals to the citizens of fragile and conflict affected nations our commitment: we will not leave you behind.

Many countries in today’s world have struggled, or are struggling, through war or political conflict to rebuild themselves and lift their people out of poverty. They are called fragile states, nations with poor health and education, little or no electricity, disorganized or weakened institutions, and in many cases no functioning governments. In Africa, 18 of the 48 countries in the sub Region are considered fragile, six of them so much so that UN, NATO or African Union forces are on the ground helping to keep peace.

We know that political conflict is bad for development. It causes great human suffering and forces people to flee their homes and abandon their crops and livelihoods. It vandalizes communities and ruins institutions like healthcare, cutting off access to essential services and leaving workers and breadwinners without jobs and wages. It destroys roads, limiting cross-border and regional trade. And it diminishes hope and motivation, so that the millions of educated African youth who leave high school and university every year looking for jobs are left unemployed and dispirited.

Africans are no different than anyone else in the world. We dread war and bloodshed and yet have suffered grievously from years of suffering. The reasons people are fighting are largely economic – uneven access to natural resources such as land and water, too few jobs and persistent poverty. Managing these precious resources on behalf of people, not in spite of them, through vastly better agricultural production, through sound policies that help governments share natural resource wealth with all citizens, will determine how well we prevent and blunt future conflicts.

Just as conflict is bad for development, I firmly believe that development is the answer to conflict.

Fragile states should not be seen as a problem to solve, but rather the solution to spurring growth and significantly reducing poverty across the continent. These countries – Democratic Republic of Congo (DRC), Guinea, Liberia, South Sudan and many others - are home to some of the world's most valuable natural resources – timber, iron ore, diamonds, and hydropower. DRC, often called Africa’s Water Tower, is home to a staggering one-half of the continent’s water resources.

I strongly encourage institutional investors in Europe and the US, currently making very modest returns on their portfolios at home, to look to Africa and especially its fragile states to triple and quadruple their yearly returns. I would tell them to invest in energy in Guinea or DRC or Cameroon, for example. It will help turn the lights on in countries that desperately want to put their battered histories behind them and grow and prosper. Only one in three Africans has access to electricity in their homes, and even when they do, they pay 3 to 4 times what we pay in the US or Europe.

Investing in more power and food for Africa will help the continent transform itself and bring its formerly war-torn countries into the political and business mainstream of one of the world’s fastest growing regions.

At a recent discussion on what it will take to stop conflict, reduce fragility and end poverty, Amara Konneh, Liberia's minister of finance said "the goal of eradication of extreme poverty will not be achieved if we leave fragile states behind." At the World Bank, we have no plans to do so. We are changing the way we do business to ensure we come up with creative development solutions to fragility.

A new World Bank Group hub on Global Conflict, Security and Development opened in Nairobi, Kenya last year to do just that. We are working closely with the private sector in each country to help improve policies that make it easier to do business - helping the captains of local industry focus on what they do best. We are marshaling our international partners to support countries trying to improve governance but struggling with crippling debt.

We're also supporting regional projects that can transform the lives of people across major swaths of the continent and not just in one country. In Central Africa, the Lom Pangar Hydropower Project will help bring green, renewable power to the people of Cameroon. In the Democratic Republic of Congo, the Inga 3 project will provide reliable power supply to DRC households, only 10% of which currently have electricity. It will also open up the country’s ability to export power. And the Niger River Basin project will boost agricultural production and improve irrigation so the people of the Sahel will have enough nutritious food to eat and market, raise healthier, educated families, and thrive.

Before heading to the Democratic Republic of Congo, Rwanda and Uganda with Dr. Kim and the UN Secretary-General, I will travel to the Republic of Congo for development talks in this former war-torn country and to see first-hand how the World Bank can step-up its development assistance to better help poor and vulnerable families in the country escape poverty and pursue lives with better health, education, and more opportunity.

Congo’s economic growth rate is one of the strongest in Africa, yet poverty reduction has been slow over the last five years. Many Congolese live in poverty, and unemployment and inequality remain significantly high. The Bank is working with the Republic of Congo on how to use its large oil revenues to stimulate broad-based non-oil growth that would generate jobs, especially for the country’s growing numbers of young people, and create a dignified, time-honored pathway for all Congolese out of grinding poverty and towards hope and opportunity.

I will be passing on the message to everyone I meet in the Republic of Congo and to other African citizens of fragile and conflict affected nations that we will never abandon them or leave them behind because working in their countries is too tough.

My pledge to African countries is that we will never walk away from fragile states.

We simply cannot achieve our goal to end extreme poverty and boost prosperity within a generation unless we have help people in the world's fragile and conflict affected states. They are the ones who need us the most. I strongly agree with you. Development is the answer to conflict but Africans need to work efficiently and effectively to make their states favourable for development. Political Instability/conflict is one of the major factor that deter sustainanble growth and development in Africa. Africans need to understand that No Investor would want to Invest in an Unstable Economy and need to work with agencies like yours willing to help because much cannot be achieved without the full participation of the people from the mentioned fragile states. As they are the ones who have a better understanding of the problems in their states. As the saying goes, "He that wears the shoes knows where it pinches most"
I appreciate your desire to help. It is a welcome development.

Iknow you are all well intentioned and work for the future, I have spent 27 years in Africa, ten of them in the Zaire/Congo/DRC and know it well. There are only a couple of real solutions, have a responsible government, which the DRC does not and is invisible, thus creating a parallel informal government of the people and their own means to survive a la Kinois of Kinshasa. Beat swords into plowshares by giving work at a living wage to reconstruct the infrastructure of the country and take them away from the impunity of armed agression, give people jobs, create economic opportunity that moves power away from politics and inherant corruption into the chance for some dignity which this continued conflict has robbed men of and made women targets for violance that stems from anger at male disenfranchisement. Reality checks my friends, do your homework in the field not in the office, talk to people who understand the realities. Make donor support conditional, really conditional by responding tangibly to milestones and expectations, if Africa is really going to be for the Africans, they must take responsibility for it. Don't make your voyage another photo op or talk to those who have vested interests, public private collaboration , as I have done in many countries is the way forward. Africa is there, filled with resources,intelligent and devoted people who are literally dying for the opportunity to make a better life.

The objective of world bank Africa is to eradicate poverty and help the poor.how can you help the absolute poverty of orphant's whose parents are sufferred with HIV/AIDS and malaria in Africa?