Of Human Waste and Water: Cleaning up Lagos City

In 2007, for the first time in human history, 50 percent of the global population lived in urban areas. The United Nations predicts that this figure will rise to 69 percent by 2050. A significant part of this urbanization is taking place in developing countries as a result of natural growth within cities and large numbers of rural–urban migrants in search of jobs and opportunities. Rapid urban growth tends to overwhelm developing cities, where there is already a struggle to develop infrastructure.

I have lived in Lagos, Nigeria all my life. Lagos city is the economic capital of Nigeria with the country's higest 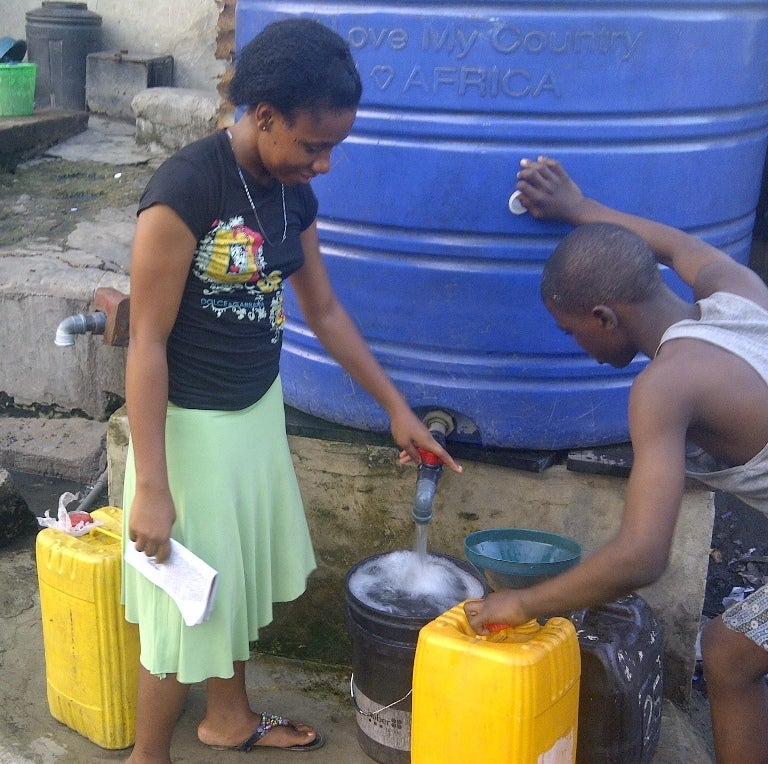 population density at 4,193 people per square kilometer. The U.N. estimates that the population of my city will hit 16 million by 2015 making it the worlds 11th largest urban system.

A combination of official neglect, corruption, extreme poverty coupled with rapid, largely uncontrolled, population growth has led to the decay of Lagos’ existing city infrastructure, which determines how livable a city is. Specifically, the human waste (sewage), water and sanitaion systems are largely inadequate. The infrastructure is poorly organized and not controlled. It is common to see drinking water pipes pass through open drainage systems. At times, these systems receive human waste as a result of locals opening their septic tanks into them or the tanks leaking. The city does not treat all of the human waste generated by millions of individuals every day. This waste is emptied directly into the Lagos lagoon. The urban poor are affected the most. Because the drinkable water infrastructure is so poor, many Lagosians depend on satchet water, local water vendors, private boreholes or expensive water filtaration units for their the daily domestic and sanitation needs.

Storm water infrastructure is also improperly managed. Lagos is a coastal city and vulnerable to flooding from rising sea levels and from storm surges. The rainy season is a nightmare to most city dwellers as floods destroy roads and other infrastructure. Commuting during rainy is unthinkable.

In July, Lagos experienced heavy rain fall. Storm water overwhelmed the poorly designed drainage and canal systems which were already choked with refuse. Twenty-five people lost their lives and the city came to a halt. Both rich and poor were impacted. The event was blamed on climate change, specifically the rise of the Atlantic Ocean.

These types of challenges should propel us to creating a more livable city. I see Lagos as a combination of systems, an infrastructure that should make the city move, produce and become sustainable. I believe going back to the basics of urban design can help us solve challenges associated with climate change.

In my work as an inventor, I retrofited a conventional septic tank into a biogas plant. A biogas plant produces a combustible mixture of methane and carbon dioxide, which can be used as a green energy source. I see city infrastructure working the same way. I envision a scenario where we combine the street grid system, water management system and energy systems to create clean water for Lagos. I call this “waste water teatment linked to clean water provision”.

Assuming  Lagos city has 80 streets, the streets can be divided into 10 units of 8 streets each. The septic tanks of 8 streets are linked to a central waste system or biogas plant. The biogas produced is used to run gas engine pumps that generate water from boreholes which is then be circulated back to consumers in the streets. So we have 10 community units, working in a decentralized, closed fashion, independently treating their own waste water, generating green energy and providing clean water.

The system above mitigates climate change by using up methane, a greenhouse gas produced normally from human waste. The system qualifies as a clean development mechanism and can be used to sell carbon credits as a source of revenue for Nigeria. Raw materials and man power are locally available and sourced. Using this model of compact urban development would also help pave the way for proper road construction and the facilitation of waste collection. It’s a decentralized system that’s easy to monitor, control and fix.

Tackling climate change in a city like Lagos needs to be achievable and sustainable. In addition to environmental protection it should also promote poverty reduction. I'd like to consult your input on the construction of a medium size biogas plant and feasibility of its operation on a facility in Ibadan. I can be reached via e-mail as listed above or at 08155636901.

When you are in the corner and have no cash to move out from that, you would have to take the home loans. Just because that will help you definitely. I get collateral loan every single year and feel great because of it.

Hello Mr Obayomi, I have only recently come across your project on converting waste to biogas which as a biochemist I find very exciting. I am looking to set it up on my livestock farm in Lagos, but dont know how where I can get the necessary materials or manpower to construct such. Where can I find a prototype, to give my team of an idea of how it will look and work.

Strange isn't it, the fact that there are couple of us working seriously on the subject yet we don't know each other. We are not co ordinated even when we are actually in the same city (Lagos). I think we should cooperate for better results.

Pure drinking water is main problem in many cities. Septic systems which have no leakage should be installed in a well manner and all wastage material can be converted in bio gas.

This is an interesting article on the water infrastructure in Nigeria we are planning a trip to Lagos. We never knew these type of problems existed in Africa's most populous country.

Hi Obayomi,
it is good to think like that but i wish to advise you that Lagos is not a city where you could introduce a project like that except in the outskethch of the city. Lagos is a mega city that needs mega infrastructural investment that is central and durable.
Your idea could be applied in rural communities with smaller population. Wastes from a central waste water treatment plant and other biowastes generated in lagos which is always huge can generate more effective energy. I am a Nigerian currently studying sustainable development in diaspora.

Little by little is often a better option. If Obayomi's proposal is done; we have more efficiency per plant; more jobs (at least per area); easier management. The energy generated can be sent to substations in the area.
Nigerian student studying Chemical Engineering in diaspora (Montreal, Canada)

Recycling of Waste in Bangalore

Appealing information you have provided. It gained me more knowledge and idea. Please keep up the good because i like the way you are writing. Thanks!

Hi Visionary,
Much encouragement for your efforts, small innovations like yours put together is what generates the big bang! I have been experimenting with some model modular housing scheme myself in which I ponder the use of self sustaining energy sources, can you elaborate more on your septic tank- to-bio gas idea, and how this works, also how oxygen is removed from the tank.
Cheers.

There is huge potential in Waste to energy sector across the globe and especially in India. It not only reduces dependency on Fossil fuels, but also reduce carbon footprint, effective waste disposal, and generate employment to many