Supporting a Breath of Fresh Air for Lagos

Chsimdi Chukwu, a 24-year-old woman from Lagos, collects and sells plastics for a living in Olusosun, a local dumpsite roughly the size of 60 soccer fields. She is exposed to the city’s heavy traffic, fumes from burnt waste, dust, and the smoke of diesel generators used in most homes on any given day.  Her health is resenting it. Like many of the 23 million people living in Lagos, Chsimdi breathes toxic air.

Air pollution in Lagos is between 6 and 10 times the maximum level recommended by the World Health Organization when measured as concentration of Particulate Matter with a Diameter Less Than 2.5 µm, or PM2.5 - that is, the size of pollutants that pass the lung barriers and enter the bloodstream.

This pollution level has grim human, social, and economic costs, as revealed by an ambitious new World Bank study, one of the first of its kind and scope in Africa. The study on the Development of an Air Quality Management Plan for Lagos, which was funded by the World Bank’s Pollution Management and Environmental Health Multi-Donor Trust Fund (PMEH-MDTF), relied on scientific, economic, and regulatory analysis to take stock of the problem and develop an air quality management strategy for Lagos.

The study made a rigorous, scientific assessment of Lagos’ air quality by setting up six monitoring stations throughout the city and assessing the data for 12 months. Various methods were applied to understand the main sources and quantities of air pollutants and climate pollutants (including greenhouse gases (GHGs). With these inputs, the study analyzed the health and economic impacts of air pollution across the 20 Local Government Areas (LGAs) in Lagos and their cost implications. The study further assessed institutional and governance structures for air quality and provided recommendations for an integrated Air Quality Management plan.

The costs of air pollution

The World Bank study estimates show that exposure to PM2.5 pollution in Lagos is responsible for 30,000 premature deaths, half of them children under one year old, and cause up to 350,000 lower acute respiratory diseases. In the industrialized LGA of Ikorodu, the high concentration of lead-based aerosols has been linked to a drop of 6.2 intelligence quotient (IQ) points in children. These impacts translate into estimated economic costs of US$0.5–2.6 billion per year using the human capital method (which assesses how much income is foregone due to health or education gaps) - or as much as US$2.6–5.2 billion (3.6 to 7.2% of Lagos’ GDP) using the value of a statistical life approach (how much society is willing to pay to reduce a small risk of death).

And these figures don’t consider the impacts on climate change. Part of the air pollutants are GHG emissions, which mainly come from engines, waste, and other sources. Together, they amount to the equivalent of 24 million tons of CO2 per year, using the 100-year Global Warming Potential estimate. Reducing these GHG is essential to stay within the 1.5 temperature target of the Paris Climate Agreement.

A strategy to address air pollution

Open burning of waste and biomass is the top cause of air pollution in Lagos, followed by dust and industrial activities. Heavy traffic also contributes to pollution: without a functioning mass transit system, most people move around in mini-buses and motorcycles with old, highly-pollutant engines. Generators are ubiquitous and another cause for concern: they provide as much as 50% of the total energy demand. 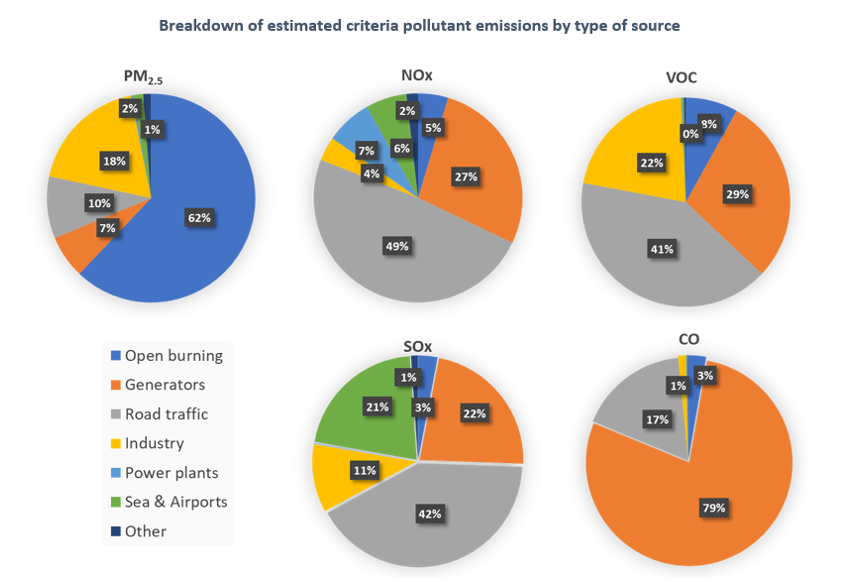 There is no silver bullet that can address such a complex problem. The PMEH study recommends a multi-sectoral strategy to improve air quality, including actions for the short-term (within one year) and medium-term (within three years). Examples of control measures include, for instance:

Several elements lie at the core of the proposed strategy. First, a call to improve air quality monitoring through more stations and enhanced data, accompanied by greater local capacity to assess the links between air pollution and health. Changes should also be made to the current regulatory and institutional frameworks in sectors contributing to air pollution, which have often gotten in the way of action in the past.

Improving air quality financing is also an essential part of the strategy. More funding is needed to implement emission control measures - while deploying green bonds, multilateral and climate funds could also support the intersection between air quality and climate change.

The report also proposes developing an air quality index that unifies the complicated science of air pollution into simple color-coded bins for everyone to see how the pollution levels are good, bad, or ugly, and prepare accordingly.

Lagos is one of the most vibrant African cities and one of the fastest-growing megacities in the world. Cleaning its air will help protect its people, grow sustainably, and contribute to fighting climate change. The stakes of inaction are too high.