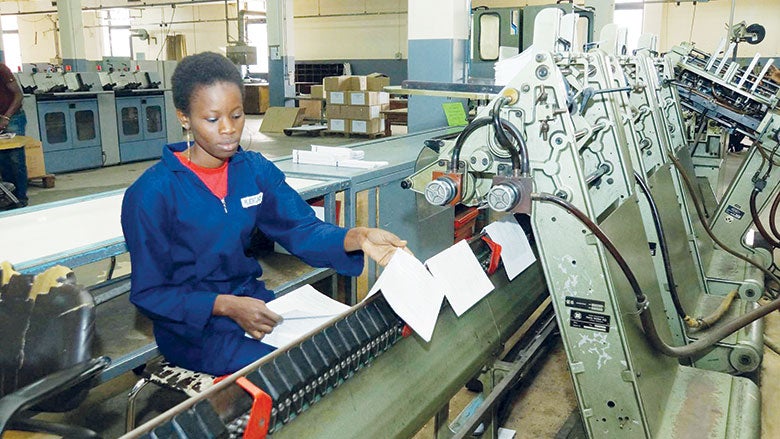 Politicians and economists often go to great lengths to scrutinize hundreds of pieces of data to identify complicated solutions, to the point of ignoring the obvious facts staring them right in the face! Although Côte d'Ivoire is devising complex strategies in a bid to achieve middle-economy status, it tends to overlook the role of women, who largely face deep inequalities that are difficult to ignore.

Women are the simplest and most expeditious way for the country to become an emerging economy.

Women in Côte d’Ivoire lead anything but simple lives. From as early as primary school, a girl is less likely than a boy to be enrolled in school. This gap widens throughout their schooling, owing chiefly to the increase in the number of early marriages and pregnancies; one third of 19-year-old adolescents have already been pregnant at least once. Pregnant girls have limited access to maternal care, which regrettably has an impact on the country’s maternal mortality rate, which is ten times higher than rates observed in middle-income countries. Even when Ivoirian women manage to secure a job, the average woman earns barely half of a man’s wages.

Women have few opportunities to pursue certain careers—particularly in the civil service, where they account for just one third of the personnel—and are mainly employed in the lower occupational levels.

In sum, all of these examples point to the extent of the discrimination faced by women in Côte d'Ivoire. Despite efforts undertaken to modernize the legislative framework, this disheartening observation is borne out by the country’s dismal ranking (171st out of 188 countries) on the United Nations Gender Inequality Index  and its ranking on the African Development Bank’s Gender Equality Index (43rd out of 52 African countries).

More equality for a stronger economy

Achieving gender equality is not merely a moral and social imperative for Côte d’Ivoire, but also an economic one. Were the country to successfully reduce current levels of discrimination against women in the labor market to bring it in line with the African frontrunners (Tanzania, Rwanda, and Malawi), it could rake in an additional US$6 billion. Reducing these levels even further to bring it on par with the world’s most equitable countries (Norway and Vietnam) would generate US$8 billion in additional earnings, which is 20 percent of Côte d’Ivoire’s current GDP.

The World Bank’s Fifth Economic Update for Côte d'Ivoire proposes a three-pronged approach to help the country improve gender equality. First, priority actions must be defined with a view to ensuring that men and women have access to the same opportunities. In other countries, gender equality promotion in the education system, paying particular attention to programs that target adolescents, has proved successful.

Similarly, this focus on education must go hand in hand with measures designed to increase access to maternal care and family planning.

Second, “ambassadors” or, better yet, “female ambassadors” must be identified to support and promote gender equality. Women still do not have a strong enough voice in political institutions, business, or even within their own family. While 20 percent of ministers are currently women, only 11 percent are lawmakers, 5 percent are mayors, and 3 percent are regional prefects.

In the business world, women are at the helm of just 25 percent of the new businesses registered at the Investment Promotion Center. And at home, numerous women experience domestic violence and are saddled with a disproportionate share of the housework. Time and again, they are denied access to productive resources (such as land) and deprived of their possessions because of traditional inheritance customs.

The often overlooked third and final step pertains to managing success, which is critical to breaking down potential resistance over time. Encouraging women to work more outside the home does imply a redistribution of housework among men and women, underpinned by a collaborative approach such as the construction of child care centers and more flexible working arrangements.

Furthermore, potential tensions should be anticipated if the entry of an inordinate number of women into the labor market is poorly managed, which could trigger job losses or a decline in wages for those already in work. This genuine risk could be mitigated by helping women better prepare for labor market realities, primarily through adequate training and by encouraging them to become job-creating business leaders.

Women are the hidden figures behind Côte d'Ivoire’s economic emergence and face gross inequalities. And yet they could become the instrument for economic growth that can propel the country toward rapid, inclusive growth.

At the risk of paraphrasing a French singer, women are truly the future of mankind, even in Côte d’Ivoire.