“You only see trash. We see a treasure trove”, why waste management in Senegal is a critical step toward sustainability

I just returned from Dakar, Senegal where I visited Mbeubeuss, the infamous dumpsite in the capital’s outskirts. An entire community of waste pickers have been eking out a living there since 1968.

My first impression was one of chaos: piles and piles of plastic gathered in nets, cans flattened by dump trucks, and hundreds of shards of metal. Suddenly, I realized there is some deep organization to this apparent chaos which may be the seed of a recycling movement. Things are not always as informal as they seem. As soon as a dump truck arrives, pickers do more than scavenge. Based on their specialty, they choose plastic, cans, wood, metal, clothes, and even organic waste sold as fodder to pork factories. Once they have picked through, nothing is left.

Senegal is well placed to be a model for successful sustainable development in West Africa. The country’s per capita GDP of $1,500 is well above the regional average of $1,000; the 38% poverty rate is below the average of 45%; and 82% of the population has access to water supply and sanitation, compared to 62% in the region.

Yet, waste management is still a pressing problem. In 2014, Senegal produced 2.4 million tons of solid waste of which 1.1 tons was uncollected.  Since only about half of the population benefits from a collection service, open dumping and burning are commonly used to eliminate household waste. Waste management is a health risk and an environmental challenge that must be addressed.

On March 5, 2020, the World Bank Board approved the $125 million Municipal Waste Management Program (PROMOGEDE), a critical attempt to solve Senegal’s waste management issues and minimize waste pickers’ health and safety risks.  Mbeubeuss, Dakar’s main dumpsite and one of West Africa’s largest, will be a key part of the program. Garbage collected in Dakar is deposited here but not treated. And the site continues to expand -  from 14 hectares in 1978 to 114 hectares in 2017. During these decades, Mbeubeuss has become a serious source of air, land and water pollution.

The legendary Mbeubeuss was created in 1968 on a drying lake and sits on a flood plain outside Dakar, close to the sea. Now, it is a 114-hectare dumpsite with 1,300 tons of waste brought in each day by 230 trucks. About 2,000 workers united under the association Bokk Djom, “Our Shared Pride,” to defend their interests, live off the waste, picking, washing and selling what they can find.

A total of 571 women work at Mbeubeuss, competing with younger, stronger men and earning a lot less. About 200 children also live and work here. Some were born on the site, some were brought by their families and others are runaways seeking refuge in the dumpsite. Food vendors stroll along the piles of waste, selling meals and snacks. Cows roam around, looking for fodder, because life goes on around the site.

The 475,000 tons of waste dumped here each year take a toll on the health of the waste pickers, in addition to the families, farmers and pastoralists living in the vicinity. Many factors worsen the health hazards: air pollution from underground fires and burning of waste in the open air; soil and groundwater contamination; and risk from persistent organic pollutants.

These are clear indications that while this informal recycling work provides a means of livelihoods and a temporary fix, most of the waste must be treated and managed to ensure a sustainable solution going forward.

The new program will include social, entrepreneurial, and skills development schemes for those whose livelihoods depend on the dumpsite. Secure access to the site, deterrence of waste burning, and provision of a health program will improve waste pickers’ conditions. Targeted childcare services and enrollment in schools will keep children away from the dumpsite.

The program will specifically target coastal cities and reduce the leakage of waste into the ocean – in 2012, these cities generated 129 million m3 of untreated waste. Garbage collection will hopefully revive tourism, a key driver of the economy.

Senegal’s current rapid urbanization rate of 48% expected to be 62% by 2025 will put a strain on cities’ capacity to manage the waste produced.  According to What a Waste report, waste generation in Senegal is expected to more than triple by 2050. We will collaborate with the Global Environment Facility, the French and the Spanish development agencies to provide a coordinated response . 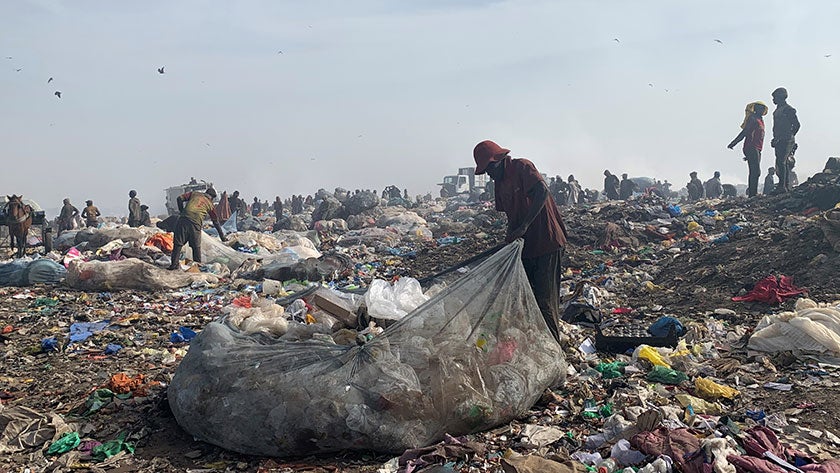 Nice write up with interesting data from in-depth research.
- I will like to know if this project is looking at mechanizing the waste sorting.
- is there any plan to recover some part of the waste that cannot be recycled into HCF (High Calorific Fractions)?