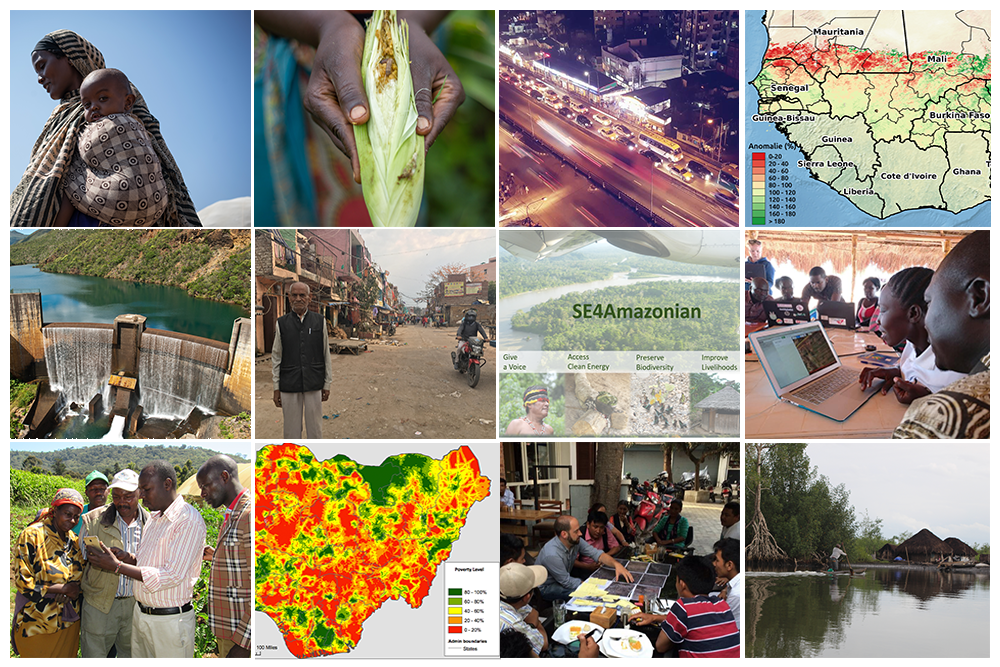 We’re pleased to announce support for 12 projects which seek to improve the way development data are produced, managed, and used. They bring together diverse teams of collaborators from around the world, and are focused on solving challenges in low and lower middle-income countries in Sub-Saharan Africa, East Asia, Latin America, and South Asia.

Following the success of the first round of funding in 2016, in August 2017 we announced a $2.5M fund to support Collaborative Data Innovations for Sustainable Development. The World Bank’s Development Data group, together with the Global Partnership for Sustainable Development Data, called for ideas to improve the production, management, and use of data in the two thematic areas of “Leave No One Behind” and the environment. To ensure funding went to projects that solved real people’s problems, and built solutions that were context-specific and relevant to its audience, applicants were required to include the user, in most cases a government or public entity, in the project team. We were also looking for projects that have the potential to generate learning and knowledge that can be shared, adapted, and reused in other settings.

From predicting the movements of internally displaced populations in Somalia to speeding up post-disaster damage assessments in Nepal; and from detecting the armyworm invasive species in Malawi to supporting older people in Kenya and India to map and advocate for the better availability of public services; the 12 selected projects summarized below show how new partnerships, new methods, and new data sources can be integrated to really “put data to work” for development.

This initiative is supported by the World Bank’s Trust Fund for Statistical Capacity Building (TFSCB) with financing from the United Kingdom’s Department for International Development (DFID), the Government of Korea and the Department of Foreign Affairs and Trade of Ireland.

This project aims to develop a scientifically tested method, based on the use of high resolution satellite data, to monitor and predict movements of Internally Displaced People (IDP) in Somalia and Kenya. It will seek to create standardized technical best practices for improving the identification, tracking, and assessment of IDPs with a particular focus on identifying at-risk and highly vulnerable women and children in famine and conflict-affected contexts.

The team says: “The flow, frequency and scale of how IDP households move around in Somalia is influenced by climate change and environmental degradation; violent conflict; and political, economic and food crises. Understanding these mobility patterns in real time, especially in mobile populations, can significantly improve our capacity to predict how and where people will move to and from enabling more efficient and effective interventions. “

Activity 2: Scale up of the Pastoral Early Warning System in the Sahel (Niger, Mali, Burkina Faso)

This project will scale up the Pastoral Early Warning System (PEWS) in the Sahel, which integrates satellite and weekly community survey data to track the impacts of climate change on pastoral conditions. Early warnings can help mitigate drought and inform decisions such as herders moving livestock during a long dry season.

The team says: “The West African Sahel is prone to droughts on an almost yearly basis. These droughts have devastating effects on communities: destroying livelihoods, exacerbating malnutrition and hunger. Pastoral herding communities are particularly vulnerable to these impacts since their livelihoods depend on grazing animals. In order to plan emergency responses or help make communities more resilient, decision-makers need access to fast and reliable information on droughts and their impact.”

This project will develop a tool that maps poverty by combining high resolution satellite and surveys in cost-effective and time-saving ways to better target water subsidies to those who need them most. The model will be calibrated using survey, geospatial, and other existing data. Such poverty mapping could have numerous other applications for resource allocation and service provision.

The team says: “What we see in our partner countries in Africa, is that subsides are equally distributed among wealthier and poorer households, and since funding is very limited, the lower income population doesn’t get enough subsidies (or doesn’t get it at all). At the end, we would expect to make water services for the poor—those identified using geostatistical data—affordable; while charging a non-subsidized price to the wealthier population”

This project will generate recommendations for mitigating climate change impacts in the Dhaka mega-city by examining the association between land use change, population shift, and urban micro-climate through geospatial modeling. Policy implications will be assessed by analyzing the costs and benefits of introducing green space planning and reviewing existing land use regulations and planning codes and their implications for the urban micro-climate. In addition, the project will produce a methodology template so that it can be replicated elsewhere.

The team says: “A key project goal is the development of a new body of knowledge on urban microclimate, which will provide quality data and statistics to support necessary institutional and policy changes for mitigating climate change effects in urban environments.”

This project will assess the functioning levels of forest ecosystems in watersheds that supply water catchments to vulnerable island communities through an innovative and low-cost tool based on geospatial data. The team will scale up a new method that is replicable and relatively inexpensive in order to enable long-term monitoring and to produce outputs that are easily interpreted by users and decision-makers.

The team says: “Forests play a role in water regulation. Yes. That has been proven for many years now. But today, seeing the level of degradation of these forests and the effects of climate changes starting — are they still able to fulfill that role? For how long? How to ensure this for the upcoming decades? These are major issues for resources and land managers. So this diagnostic aims to give them some answers.”

The Fall Armyworm (FAW) are aggressive feeders that decimate crops, particularly maize and sorghum, potentially causing widespread food insecurity. This project will contribute to the efforts to eliminate the FAW threat by developing a tool that uses satellite imagery to detect FAW hotspots. The proposal is for a proof of concept, which if successful will be developed into a software tool to help public institutions, NGOs, and commercial farmers maximize the benefits of insecticide, manage yield losses, and adapt to climate change challenges.

The team says: “Fall Armyworm is an invasive pest, which was first recorded in West Africa in early 2016. Crop losses to date in Africa are estimated to be $13.3 billion, and maize yield losses are predicted at 30% in the 2017-18 season. As Fall Armyworm has only been present in Africa for a short period, its behaviour is not yet understood and research into management strategies is still at a very early stage.”

This project will engage refugees in mapping refugee camps, as well as non-camp communities, to capture data on population, built environment, and services, thereby allowing governments to improve service delivery and support to refugee communities. It will scale up a proven pilot and combine citizen-generated data with surveys and satellite imagery to address new sectors and locations.

The team says: “Over 1.4 million refugees from South Sudan have arrived in Uganda in the past two years, and more are arriving every day. Measuring access to key services (e.g. clean water sources) is nearly impossible to gauge, considering the rapid rate of cross-border forced migration into Uganda and Tanzania, and subsequent urban and rural growth. Our project bridges this critical data gap by increasing near real-time, comprehensive data production on base infrastructure and services where refugees reside. It can provide this data over large areas in Uganda and Tanzania, and does it in a sustainable way by building the capabilities of refugees and host communities to keep data up to date “

Activity 8: Participatory Mapping to Support Sustainable Energy for All in the Amazon (Ecuador)

This project will use earth observation data and citizen engagement to help deliver access to electricity to indigenous people in Ecuador and other remote areas of Amazonia. The project will consist of geospatial analysis of the study area, a participatory mapping approach, and the dissemination of results for transferability. Citizen participation will reduce costs and improve the accuracy of data production and dissemination, which benefits national statistics offices, but also planning offices in charge of electrification and development plans.

The team says: “Knowing the demand and technological choices of the indigenous population in the Amazon will help to accelerate energy supply and other basic services such as education and health. With our work we want to overcome obstacles which those who are left behind are facing but during all activities we also respect their opinions and needs.”

This project aims to build a community data collection effort among older people in urban Kenya and India to better understand the spatial and social barriers to older residents in accessing services, particularly for the homeless or those living in informal settlements. Geotagged primary data will be collected at project locations on a range of older age-related spatial and social barriers. Data collection will be undertaken by data collectors, local organizations, and older people themselves.

Digital Farm aims to help smallholder farmers respond to climate risks by integrating multiple sources of data and then presenting them with a personalized, accessible perspective on how to adapt and respond to specific challenges. The project intends to enable smallholders to engage with data in meaningful ways and transition from being passive recipients of data to active designers of the very data systems intended to benefit them.

The team says: “We are motivated by a commitment to collect, disseminate and use data in a different way – placing smallholder farmers at the center to create something with real value. Digital Farm empowers smallholder farmers with actionable data, enabling farmers to take action on their farms.”

This project will create a new methodology for rapidly and accurately assessing post-disaster damage, shifting the current focus from the most damaged (disaster-induced losses) to the most in need (disaster-induced vulnerability). A reputable team of researchers and civil society organizations will integrate multiple remotely-sensed and crowd-sourced data sets into a comprehensive damage assessment. It will use the 2015 earthquake in Nepal as the case study.

The team says: “Everyone on the team was in some way involved or personally affected by the 2015 earthquake in Nepal. We want to make sure that the information used to make decisions – the prioritization of assistance, the allocations of funding, the reconstruction standards and process, properly reflects disaster-induced vulnerability and need.”

This project seeks to increase the visibility of off-grid, hard-to-reach populations by providing information about the location and size of small settlements/villages through an online interface, taking advantage of high resolution satellite images, Volunteered Geographic Information (VGI), and modeling. The project will focus on small settlements within mangrove areas of six data-poor countries in West Africa that share similar landscape and livelihood characteristics and where there is an urgent need for locating and estimating coastal population in areas prone to sea-level rise. The project will subsequently establish partnerships in other regions (e.g. Amazon Basin).

The team says: “To date, there are no well-established methodologies to provide disaggregated information on hard-to-reach populations to governmental and non-governmental organizations. Addressing this gap through an easy-to-use, online interface could help in targeting development and adaptation planning for those populations” I'm from Papua New Guinea and working as M&E officer in a World Bank funded project called Productive Partnerships in Agriculture Project - Coffee Component. I am very much interested in this project.