Ecofacts, an ingeniously simple app by Andres Quijano of Argentina, is the winner of the 2012 Apps for Climate competition. Ecofacts was one of 14 Apps for Climate finalists that was recognized at the Connecting for Climate event last Thursday. 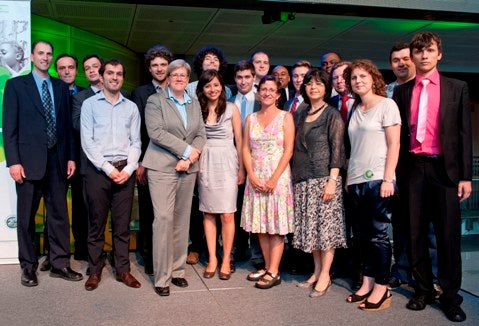 In all, 17 developers—four from Latin America, three from North America, three from Macedonia, one from Africa, and six from Europe—came to Washington, DC on June 28th for the Apps for Climate finale. They spent the day talking to World Bank staff about their ideas and creations, and brainstormed with each other about how they might collaborate in the future. 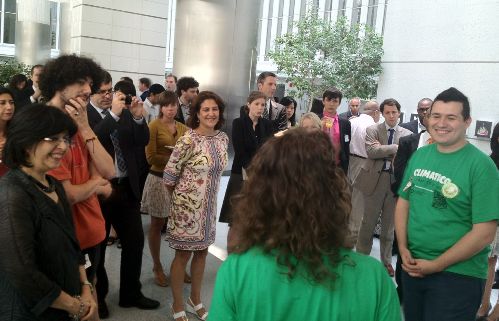 “To me, these apps demonstrate the real power of being open, when data are put to use to gain new insights.”

But without a doubt, the highlight of the day was the evening festivities. The awards ceremony took place at the Newseum in Washington DC, part of the Connecting For Climate event that included the launch of the Voices4Climate competition and music by special guest Juliani.  World Bank Managing Director Caroline Anstey and Vice Presidents Cyril Muller and Rachel Kyte also gave remarks, along with special guests Seth Borenstein, André Laperriére, and Jack Johnson.

The awards were a closely kept secret until Shaida Badiee, Director of the World Bank Development Data Group, announced the winners to a packed audience—first the Honorable Mentions, then working up to the First Prize award. "Nobody was more surprised than me," recalled Quijano afterwards. "After they finished with the Honorable Mentions and hadn't called my name yet, I just assumed they made a mistake."

"Each of these is using the wealth of open climate data in some unique way," remarked Badiee, in presenting the awards. "To me, these apps demonstrate the real power of being open, when data are put to use to gain new insights, discover solutions, and catalyze change."

The Apps for Climate competition was launched in December, 2011 at the COP-17 conference in Durban. Developers had just over four months to develop and submit apps, which had to use data in the World Bank’s open data catalog to address climate change issues in some way.  In all, over 52 apps were submitted.  Prizes were determined by a panel of expert judges: Christiana Figueres, Executive Secretary of the United Nations Framework Convention on Climate Change; Rachel Kyte, World Bank Vice President of Sustainable Development; Juliana Rotich, Executive Director of Ushahidi; Andrew Steer, World Bank Special Envoy for Climate Change; and Patrick Svenburg, Director, Developer & Platform Evangelist in Microsoft’s Public Sector division.  The “Popular Choice” award was determined by an online voting system in which anyone could participate.

Ecofacts is designed to illustrate what users can do about climate change, depending on what country they are in, by showing emissions, energy consumption, and actions in ways that are easy to understand.  For instance, Ecofacts displays per capita electricity consumption in the conventional kilowatt hours--but also in the equivalent number of “lightbulb hours,” or any of several appliances.  Ecofacts also calculates how steps like using CFL light bulbs or taking public transportation, at an individual level, compute to national emissions reductions.

"My idea is that the user interacts with the data as he likes and see what is most interesting for him about three indicators: carbon dioxide emissions per capita, energy consumption and sources of energy production," Quijano explains.

My Climate Plan allows users to create their own hypothetical national plans for reducing greenhouse gas emissions. The initial version is based upon Norway’s policies, allowing public users and politicians to see the cost and impact of each policy and to understand that it will take a mix of policies to reduce climate-changing emissions.

"A white paper takes a week to read and understand," notes Henrik Lund of the Oslo-based Bellona Foundation, where My Climate Plan was developed. “This take 5 minutes to create a plan and see the impact.”

Globe Town shows how countries are connected globally through trade, immigration, or international assistance, through an attractive and animated user interface. Globe Town also includes country profiles of issues such as energy use, emissions, and climate adaptation, giving the user a quick assessment of the country’s position. “The goal was to show that we’re all part of this – we’re all connected," said Andrea Prieto, one of Globe Town’s developers.

Climate for Children is a collection of interactive classroom presentations and games for teaching climate change issues to students. "Our goal is to use interactive blackboard technology, together with open data, to help teachers improve the classroom learning experience," said Darko Bozinoski, one of the developers who attended the awards ceremony.

ClimaScope was developed by Dr. Jeff Smith and the Tyndall Centre on Climate Research. The goal of ClimaScope is to provide planners and policymakers with a tool that allows them to visualize and compare future climate models, and what they predict in terms of temperature and precipitation. ClimaScope is unique in that it uses partially opaque overlays to allow users to view a "composite" of several models at once. ClimaScope also lets users overlay climate models with World Bank project locations, similar to Mapping for Results.

Honorable Mentions in the 2012 Apps for Climate competition were: