This blog is the ninth in a series of 11 blogs on commodity market developments, elaborating on themes discussed in the April 2022 edition of the World Bank’s Commodity Markets Outlook.

The World Bank’s Beverage Price Index rose by more than 8% in the first half of 2022 compared to the previous six-month period, reflecting mostly strength in Arabica coffee prices. The index is expected to average more than 10% higher in 2022 compared to last year and then ease in 2024. The price outlook could change if there are new pandemic-related lockdowns or a weather-induced deterioration in coffee supplies.

Coffee prices, which have been supported by weather-induced supply shortfalls, are expected to ease next year. Although both Arabica and Robusta prices have been relatively stable in the past six months, they are 17% and 5% higher than in the second half of 2021, respectively. Arabica prices exceeded $6/kg in February and June, the highest since May 2011. The price surge has been driven by a weather-related production shortfall in Brazil. However, global coffee production is expected to increase by an estimated 4.5% in the 2022-23 season, largely in response to Brazil’s rebound. Although global coffee consumption is expected to reach pre-pandemic levels, the anticipated strength in production is likely to cause some easing in prices in 2023. 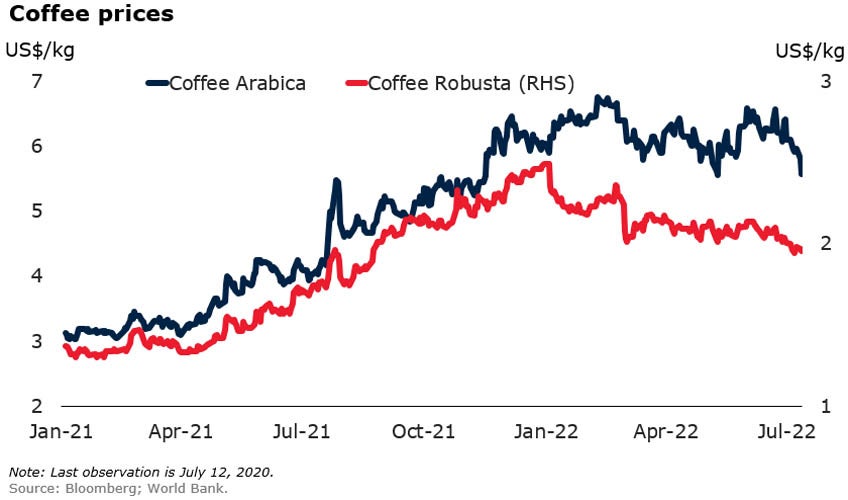 Although cocoa prices declined recently, they have been fluctuating within a narrow band of $2.30-2.55/kg during the past two years. Global cocoa production during the current season is expected to be about 1% lower than last season’s crop. Some uncertainties earlier in the season over Ghana’s crop were compensated by Côte d’Ivoire’s good prospects—these two countries are the world’s largest suppliers. Global grindings, a measure of demand, which declined considerably during the pandemic, are projected to increase by 2%, pushing stocks down by 1%. Cocoa prices are expected to remain fairly stable in 2022 and 2023, as the global market appears adequately supplied and as pandemic-related disruptions steadily ease.

Following declines earlier in the year, tea prices increased recently. The firming began in 2022Q2 in Kolkata (India) in response to increased imports by Russia. More recently, prices in Colombo (Sri Lanka) have increased due to lower production induced by the country’s economic crisis (which was triggered by fuel shortages). Prices in Mombasa (Kenya), however, have been relatively stable as a supply shortfall in Kenya was compensated by production increases elsewhere in the region. Prices (the three-auction average) are expected to remain broadly stable for the next two years. Risks to the outlook relate to the easing of mobility restrictions from the pandemic and reduced consumption by Eastern European and Central Asian countries.