This blog is the eighth in a series of nine blogs on commodity market developments, elaborating on themes discussed in the October 2021 edition of the World Bank’s Commodity Markets Outlook.

The World Bank’s Beverage Price Index, which gained more than 10 percent in 2021Q3, remains nearly 30 percent higher than a year ago. The surge in coffee prices due to supply shortfalls and, to a lesser extent, the increase in cocoa prices, contributed to the strength of the index. The index is expected to stabilize in 2022, following a projected increase of 13 percent in 2021.

Coffee prices at historically high levels. Coffee Arabica and Robusta prices increased by about 20 percent in 2021Q3, and remain around 70 percent and 50 percent higher, respectively, compared to a year ago.  Arabica averaged above 5$/kg during October-November 2021, the highest level since 2011. Frost in Brazil (the world’s dominant Arabica supplier) and dry weather in Vietnam (the world’s main Robusta producer) reduced global coffee supplied by 11 percent in the current season. Following a projected 30 percent increase in 2021, prices are expected to stabilize in 2022. However, the outlook is subjected to upside risks, as early indications show that Brazil’s supplies may fall below its long-term trend in the upcoming season. 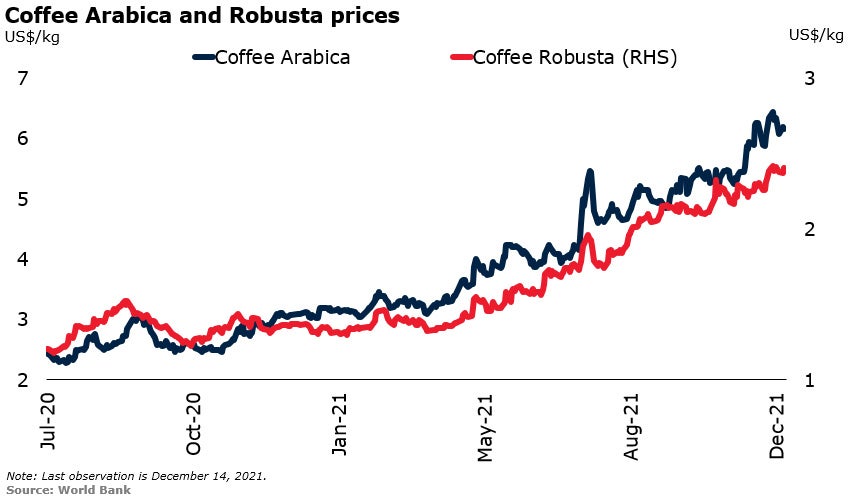 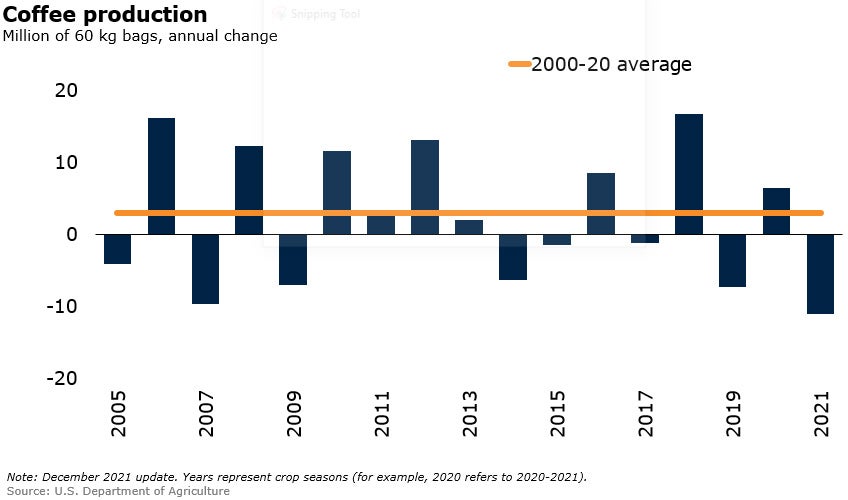 Cocoa prices remain stable. Cocoa prices have been relatively stable during the past year, ranging from $2.30/kg to $2.60/kg. Global cocoa production is projected to increase by 10 percent this crop season in response to favorable weather conditions in West Africa , especially Côte d’Ivoire, the world’s biggest supplier. Global grindings—a measure of global demand—are expected to increase by more than 3 percent. Cocoa prices are expected to remain stable amid adequate global supplies. 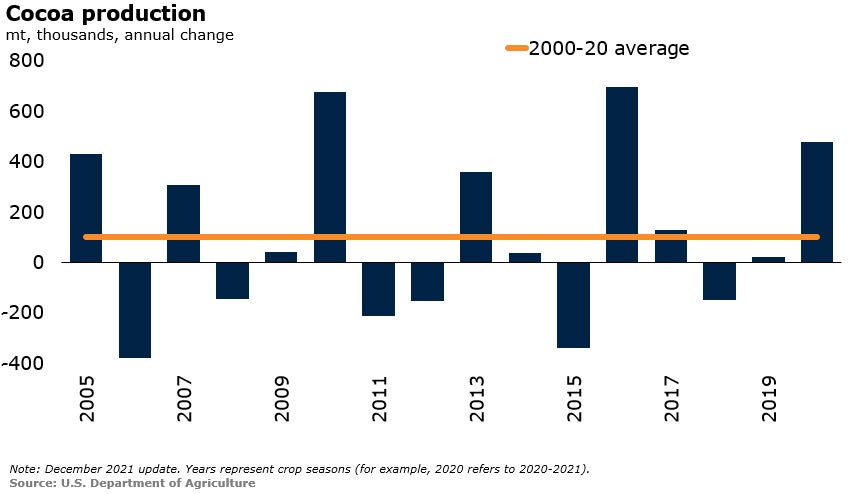 Tea prices remained stable in 2021Q3, with increases in Mombasa (Kenya) offsetting declines in Colombo (Sri Lanka) and Kolkata (India). The strength of prices at the Mombasa auction reflects weather-related shortfalls in East Africa, especially in Kenya, the region’s largest tea exporter; its tea production is estimated to be 10 percent lower in 2021. In contrast, production was higher for other key exporters such as India and Sri Lanka, where production increased by nearly 20 percent during the first three quarters of 2021 compared to the same period of 2020. Due to adequate supply, tea prices (three-auction average) are expected to decline marginally in 2021 and 2022. Risks to the outlook include COVID-19 outbreaks and mobility restrictions in key exporting countries. A lot of knowledge here