We live in a globalizing world where countries are increasingly integrated across a variety of dimensions—economic, political, cultural, and environmental, to name a few. While globalization is often credited with increases in economic growth and GDP per capita, it’s not without its discontents. Among these, we increasingly see environmental issues like water and air pollution extend beyond national borders to affect neighboring countries, as well as the wider world. For example, recent evidence suggests that polluted air from China has led to increased mortality in neighboring South Korea as a result of respiratory and cardiovascular diseases.

Are decreases in air quality a necessary evil in order to achieve economic success? Data from the World Bank’s World Development Indicators database shows that while global GDP per capita increased by half between 1990 and 2016, global trends for air pollution (as measured by levels of PM2.5, or particulate matter less than 2.5 micrometers in diameter) followed a similar upward trajectory. 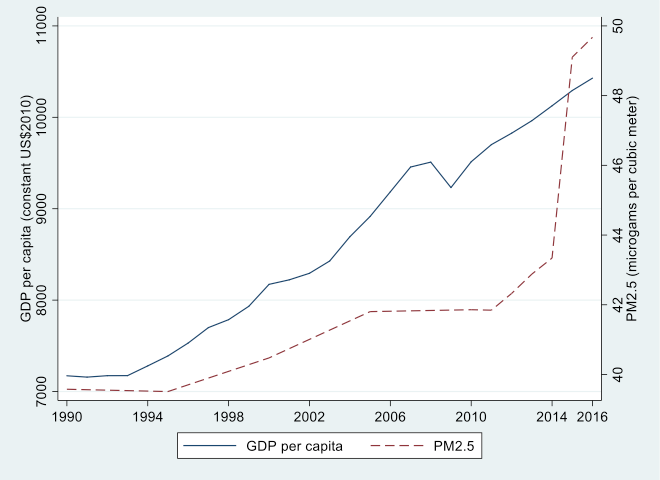 We review and discuss these challenges in a recent paper on tracking and measuring the Sustainable Development Goals (forthcoming in World Development). Our results agree with a recent World Bank report which suggests that by 2013, about 87 percent of the world’s population were living in areas with polluted air that exceeded the World Health Organization’s annual safety threshold of 10 micrograms per cubic meter of PM2.5. The same study also estimates that exposure to ambient PM2.5 drove up premature mortality by 30 percent, from 2.2 million deaths to 2.9 million deaths per year between 1990 and 2013. 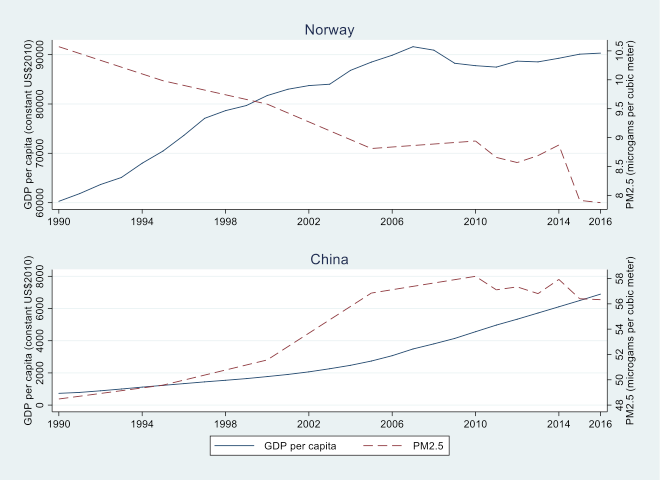 Closer examination reveals that China’s air pollution levels peaked around 2010 and have modestly decreased since then. These improvements in air quality are most likely the result of the country’s strong measures to reduce pollution, including establishing clean air regulations, curtailing coal-burning power plants, and reducing the number of cars on the road. Nonetheless, much more must be done, given that China’s PM2.5 level in 2016 was still two-fifths higher than the global average for that same level of income (56 micrograms at GDP per capita US$ 7,000).

The first step to addressing these challenges involves obtaining high-quality data that allow for comparison over time, both within and across countries. While a well-informed decision-making process requires high-quality time series data, these data are too often missing for environmental outcomes such as PM2.5 air pollution. In a recent comprehensive database compiled by the UN to track progress on the SDGs, we found that as many as 96 countries have no data whatsoever on Sustainable Development Goal 13, Climate Action. Looking more closely at the country-year level, we also found the number of available data points for this goal is in fact less than 5% of a complete database during the period 2012-2016. Lengthening this period to the past 20 years (that is, 2000-2018), this figure decreases even further, to less than 3%.

We thus strongly encourage further action by the international community to collect, harmonize, and maintain high-quality data that will allow for detailed analyses of country trends on the Sustainable Development Goals. Securing country ownership of these efforts will be critical to establishing the national capacity needed to render them sustainable, into 2030 and beyond. Development is human nature and we can not suggest other way around. It would also be not viable. I also agree with the core concepts of GDP correlating with environmental degradation.
Solution in my opinion which is based on my travelling across countries,
1 discourage urbanization with a strong global effort. It would reduce pockets of polluted atmosphere around mighty civic areas. It would also help nature to normalise naturally if people civic centres are scattered distantly.
2. Major players start environmental aid as human technology and resources to at least neighbouring countries effecting most

With no doubt, the photo shows it clearly. Look at what happens in France as a representative of the whole EU, it is a clear indication of the necessity for a proper degrowth system. However, pollution and in particular toxic pollution could be avoided with proper GDP programming. What I observed in some East Asian beautiful countries during my conferences, getting haze and smoke from neighboring countries is a disaster that needs to be solved ASAP.