This blog is the eighth in a series of 11 blogs on commodity market developments, elaborating on themes discussed in the April 2022 edition of the World Bank’s Commodity Markets Outlook.

The recent surge in natural gas and coal prices has been so swift that the main benchmarks were roughly three times higher in 2022Q2 compared to a year earlier. European natural gas and South African coal prices reached all-time highs in March and April, while U.S. natural gas prices reached their highest level since 2008. The surge in prices partly reflects the impact of the Russian invasion of Ukraine; in 2020, Russia accounted for one-quarter of global exports of natural gas and just under one-fifth of coal exports. Beyond the impact of the war, demand for natural gas and coal has been robust, rising by about 5 and 6 percent, respectively, in 2021 amid a strong post-pandemic recovery, with both reaching record highs.

The war in Ukraine is disrupting trade in energy. Europe relies heavily on Russia for imports of natural gas and coal. In response to the war, the European Union imposed a ban on imports of Russian coal starting in August 2022 and has pledged to reduce imports of Russian gas by two-thirds by the end of the year.  While some of Russia’s coal can be redirected to other countries, this will be costly as coal is bulky and expensive to transport. Redirection of natural gas is even more limited due to a lack of transportation infrastructure — 70% of Russia’s exports to Europe are by pipeline.

EU turns to alternative LNG suppliers. The EU has sharply increased its imports of liquefied natural gas (LNG) to rebuild depleted inventories and diversify its suppliers. Inventories have risen rapidly in the last few months, although they remain slightly below the five-year average. In addition, EU countries are investing in additional infrastructure to facilitate LNG trade, such as new terminals, and the EU has also announced plans to sharply increase renewable energy capacity. Energy policies in Europe, however, have large spillover effects on other countries. For example, the sharp increase in EU imports of LNG has forced other countries that rely on LNG, notably emerging markets in Asia, to turn to coal. 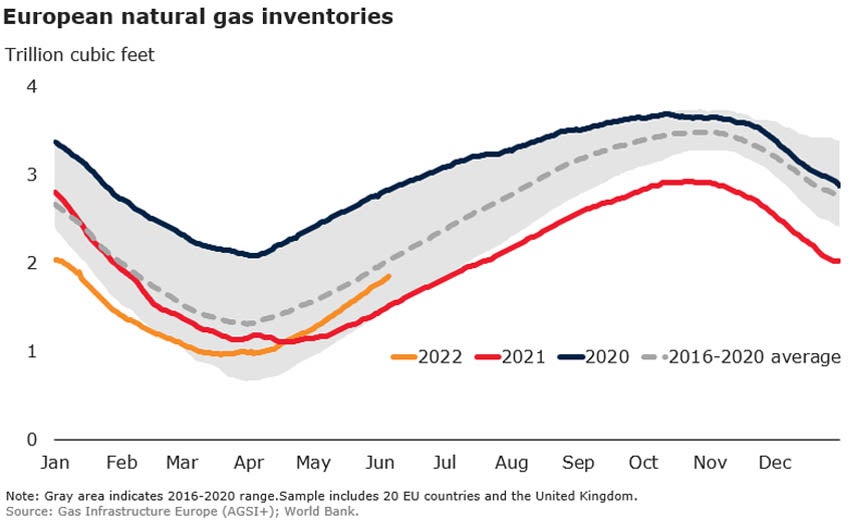 Amid high prices, U.S. exports of LNG soar. The United States exported 11.5 billion cubic meters per day in the first half of 2022, a record high and equal to 12% of its domestic production.  U.S exports to the EU and the United Kingdom have more than tripled compared to last year, such that Europe accounted for about three-quarters of U.S. LNG exports in the first half of 2022. The increase in U.S. LNG exports reflects the high spot prices of European natural gas compared to both the U.S. and Asia prices. U.S. LNG exports have recently declined, however, due to an explosion at a major LNG terminal. This disruption to supplies is expected to last until October.

Coal production rises amid high prices and shortages. Although global coal production increased by nearly 6% in 2021, coal shortages in China and India led to policies aimed at increasing domestic production.  Because the coal (and natural gas) shortages have persisted, additional policy measures were introduced earlier this year. India, for example, announced plans to reopen 100 coal mines that had previously been considered uneconomic.

Risks to the natural gas and coal outlook. After a projected sharp increase in 2022, natural gas and coal prices are expected to moderately decline in 2023, although they will remain much higher than their five-year average.  The duration of the Russia-Ukraine conflict and the extent of its disruption to trade in coal and natural gas are the biggest uncertainties facing the outlook for the market. A sharp reduction in Russia’s exports to the EU, for example, could cause prices to spike, particularly if it occurred during the winter period when demand is high. Exports of natural gas from Russia to Europe have already fallen due to maintenance and other technical issues with the Nord Stream 1 pipeline. Prices also remain vulnerable to weather-related conditions and import policies that can affect trade patterns and push up costs. This is particularly the case given the very limited global spare production capacity for natural gas. Given that most energy generation projects typically have gestation periods of 18-24 months for delivering energy output; it would be important to see how soon Europe can overcome its dependence on Russia. The longer it takes, the higher would be an adverse impact on its economy, industry & people's lives (inflation) in general. Hopefully, EU can secure energy soon from some of the energy exporting nations... Let's see how it unforlds...