This blog is the seventh in a series of 11 blogs on commodity market developments, elaborating on themes discussed in the October 2022 edition of the World Bank’s Commodity Markets Outlook.

Fertilizer prices have eased from their early 2022 peaks but they remain at historically elevated levels. The price easing partly reflects weak demand as farmers cut back fertilizer field applications due to affordability and availability issues. The industry is also affected by supply-side issues, including a production crunch in Europe, disruptions due to sanctions on Russia and Belarus, and trade restrictions in China.

Production crunch in Europe. The sharp increase in natural gas prices in Europe has led to widespread production cutbacks in ammonia—an important input for nitrogen fertilizers. As of October 2022, about 70% of European ammonia production capacity had been reduced or shut down.  However, input costs have declined in recent months due to increase imports of liquefied natural for national reserves in Europe as well as expectations of a milder winter. This could allow some shuttered nitrogen fertilizer production facilities in Europe to resume operations. 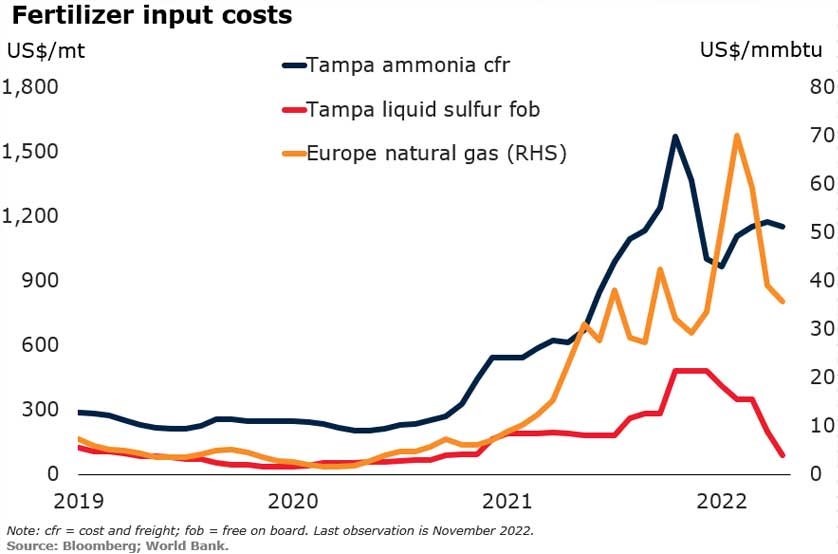 Supply disruptions from the Ukraine-Russia war. Following Russia’s invasion of Ukraine in February 2022, several economies (including the EU and the U.S.) imposed sanctions on Russia and Belarus, both important fertilizer suppliers.  However, the trade sanctions have specified “carve-outs” for the food and fertilizer sectors to avoid adverse effects on global food security. These carve-outs have enabled Russia to continue exporting fertilizers. However, potash exports from Belarus have fallen by more than 50% due to the restriction on using EU territory for transit purposes. In particular, Lithuania has halted the use of its railway network to transport Belarusian potash to the port of Klaipeda, which typically handles 90% of Belarus exports.

Export restrictions in China. Supply concerns have been exacerbated by China's extension of export restrictions on fertilizers until the end of 2022 in order to maintain domestic availability. DAP exports from China, which accounts for 30% of global trade in DAP, fell by nearly 50% (y/y) during the first ten months of 2022. Meanwhile, Chinese urea exports declined by about 60% (y/y) over the same period.