Half of the world’s poor live in just 5 countries 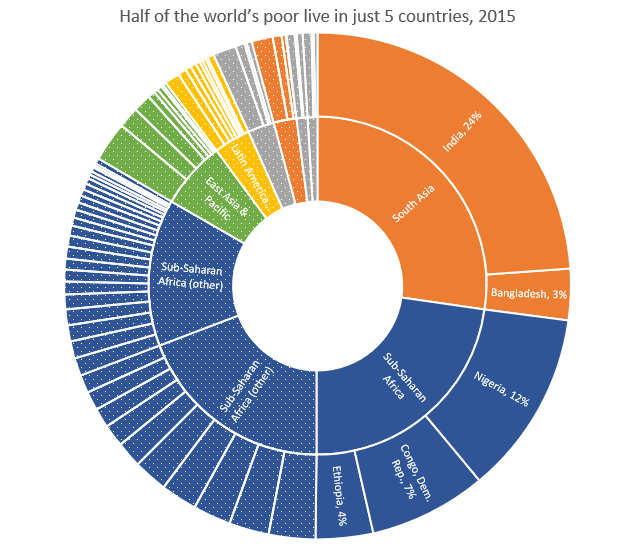 Of the world’s 736 million extreme poor in 2015, 368 million—half of the total—lived in just 5 countries. The 5 countries with the highest number of extreme poor are (in descending order): India, Nigeria, Democratic Republic of Congo, Ethiopia, and Bangladesh. They also happen to be the most populous countries of South Asia and Sub-Saharan Africa, the two regions that together account for 85 percent (629 million) of the world’s poor. Therefore, to make significant continued progress towards the global target of reducing extreme poverty (those living on less than $1.90 a day) to less than 3 percent by 2030, large reductions in poverty in these five countries will be crucial.

However, we mustn’t lose sight of the numerous other countries with high poverty rates. As poverty projections to 2030 for these five countries reveal, uneven outcomes are likely (see figure 2). When projections are based on countries growing in line with past growth rates (the regional average over the last ten years), extreme poverty in India and Bangladesh approaches zero by 2030 but extreme poverty in Nigeria, DRC, and Ethiopia remains quite elevated. The uneven progress across these 5 countries is indicative of the broader uneven progress globally. An outcome where extreme poverty is nearly eliminated throughout the world except in one region, sub-Saharan Africa, certainly does not portray a picture of a world free of poverty. As emphasized in the Poverty and Shared Prosperity Report 2018, we should go beyond the focus on reducing the global poverty rate to below 3 percent and strive to ensure that all countries and all people can share in the benefits of economic development. Interestingly some of these countries are the richest for having huge amount of natural wealth! Congo has natural resources estimated to worth over 24 trillion dollars! Nigeria, an oil producing country has significant oil reserves! If the political set up in these countries is stabilised, if the investment is made on projects for public-good, then about half the poverty will be easily eradicated. But where to start? Corruption and illegal business practices are just two areas needing attention to recover people's money stashed away in foreign banks.

SS AAfrica, as usual, being left behind. Yet, it is a resource rich region. What a puzzle!
Congrats on the great piece Roy.

Well said these countries are the richest in certain types of natural resources, poverty, or absolute poverty is a created factor here so as to enable certain rich to exist.

The local corrupt leadership is the main challenge; equally multinational organisations are responsible for fuelling and giving recognition to these corrupt members of the government - so they can easily get attractive deals and preferences in those countries. Unless these two combination of challenges are removed, it will be difficult to see any improvement.

The Nigeria I know and lived in as a indigen of the country, if tackling corruption and illegal business are the only parameters that can be use to eradicate poverty in the country then definitely our country will never be free from poverty.

A very interesting point of view. There is a danger, however, that with these huge numbers, small countries (like Honduras, for example) tend to be totally ignored. Poverty is a huge problem for any country, regardless of how small, when investment in poverty reduction programs have been totally ineffective. There must be some aspects of poverty that need to break old paradigms that have classically characterized WB country strategies.

This is a valid, comparative prediction of the state of poverty in 2030 of some countries. If we look at a couple of the countries the discussion is based on, it will not be surprising that India will be a progressively better achiever in reducing poverty. There is no question in my mind that stability in government and fair governance that India has been enjoying despite limitations in the slowing of population growth is a strong factor. Ethiopia on the other hand has had bad luck in all these 3 factors, especially in the last 45 years. A more recent change in government that 2018 brought with it is determined to focus on these three factors as prerequisites and it would not be surprising therefore to see the 2030 predictive value will rather be showing much less poverty than the present prediction. As we know most that suffer the effects of poverty are women and children and the non direct causes of poverty mentioned should be taken seriously including internal displacements and tribal conflicts that happen to be negatively affecting more of mothers and children .

This is so insightful for economic planning

I thought my country Uganda would be among the
Top five poor countries but the viscous cycle of poverty is mainly among farmers. But I think this little mechanization of Agriculture has helped Her .I think other countries in Africa should not focus on the governments alone because there are very many developmental sectors with limited government's interference such as the service sectors.

This article is really an eye opener for the world and very insightful for proper economic planning that paves way to eradicate the roots of poverty.

I some countries like Nigeria, aside from corruption, the structure of government contributes to the poverty. It makes distribution of wealth resulting in increased inequality with the rich getting richer and poor getting poorer. The cost of governance and lack of decentralization disallows deployment of resources to the local communities where the majority of the people are and to sectors that are critical to wealth creation, such as agriculture, especially for small holder women farmers. Hence the projection can only be reversed if the budgetary processes are attended to

Looked at from another perspective the stats show that almost two thirds of the world's poor live in SS Africa. That should also inform any strategy of the world bank and others on how to achieve poverty reduction goal. Reforming international institutions and rules of the game around trade in agric and natural resources, coupled with re alligning the terms of trade especially for Africa cannot be ignored.

In Nigeria there is poverty, low investment, low production, corruption in country, lack of electricity and water supply,employment rate is very low,monetary fund is very low compare with some countries.Government should boost economy they should provide all what the country is lacking.

Very interesting indeed. Ironically some of these countries have so much natural wealth! Some proper planning and action will really be useful to reverse this situation.

I am proud to see India using technology and potential of its talent to uplift millions from extreme poverty in limited time frame. Also it is important to note that India has a population base which is atleast 7-8 times than any of these countries plus geographic expanse is also significant which hamper speeding of efforts in this space. So as a % of total population, extreme poverty for India will be much lower number. It is also alarming that African nations despite lower population base have not stepped up the efforts.

The conversation is relevant to the poverty situation in my country, Nigeria.

DRC & Nigeria are rich with huge natural resources, Yet are the poorest. SAD.

We need to reform our Policies and Politics.

How do you measure poverty levels in view of the following;
1) people having different culture background, for instance the bushmen and those who live in towns. Dressing habits e.g Masai in the rural setting and town dwellers of Kenya. In short what attributes do you use to measures levels of poverty?

Very good analysis, which is useful to take decisions to eradicate poverty at the earliest. Of course world bank can play a very little role. Government in countries like India need to bring down inequality of income and wealth. 1% of the population controls 58% of the wealth. If wealth tax of even 1-2% is introduced it can be used to reduce consumption tax like GST substantially. It can create vicious circle of demand for products, reduce recession and increase capacity utilisation, productivity, efficiency, exports and generate employment. It can result in boom in private investment.

I have seen people sacrifice their arable land for city life only to return to build houses or sell the land. Homesteading and off grid life should be promoted in these countries and the rest of the world.

I am worried about Bangladeshi poor figures. If survey is correct it would be more.

Sadly studies have also shown these are some of the countries that also have the largest populations. We can try to fight poverty all we like but if people who cannot afford to have children keep procreating we will never get a head of this trend.

My interest is in development economics. The above commentary is very useful for me. It tells things are improving in all the five countries.

And the worst fact is that India is a rich country with a large poor population.....

Interested to know which counties rank the highest in income inequality.

It is very surprising to hear such an unexpected analysis, especially the projection of poverty by 2030 for Ethiopia and DRC is frustrating and unbelievable. Interestingly, these two countries are rich in land and labor, but the headache of the nation of Ethiopia particularly the corrupted officials that use for government budget for personal benefit than investing generation wise projects. From my point of view, whatever happens, the poverty level in Ethiopia by 2030 will rapidly decline not to remain elevated with the effort of her intellectual and uncorrupted officials struggling day and night to broke the yoke and vicious poverty circle.

These countries need to make a deliberate attempt to encourage local economic development to remove this number out of poverty.

i wonder why those rich countries help their poor people?

In all these countries extreme poverty has mostly political and cultural causes.
It is indeed the case in DR Congo where a clique of corrupt politicians maintained the population beyond any acceptable standard regarding access to education.

I will be glad to participate in the conversation. I was a former adviser at the French Chamber of Commerce in Paris, France.

A detailed analysis of why poverty exists, where and what caused it can lead to ranking the best solutions to eventually lead to much less of it. Patience is required to put all the elements of it together with the rankings along with ways to make the most efficient improvements work. Good team effort is called for.

appreciate your hard work to getthis report, will be much more useful toolindiacator the 5 contries to
do action plan to reduce the povery at the best down level

Why if the population of these countries increase? What become of them?

Base on what going on currently in my country Nigeria, the way in which government neglecting real way of reducing as well eradicating poverty then the poor remain pure and the middle class will sleepy to lower class and Rich and other top government officials will remain lavishly.

I think most of these countries with higher numbers of people living in extreme poverty is as a result of corruption, mismanagement and above all, all these loans and stuffs they go in for that comes with a lot strings attached. These strings attached on the loans kill innovation and hinder development in the recipient country since the money they go in for cannot be put to the right use by the country's own discretion but on the terms of the one giving it out.

Do u think that rich countries seriously want to elemnate poverty from the world?