In the buzzing, vibrant city of Freetown, you’ll find lush forests, buzzing markets, and oceans with water so blue it almost seems unreal. What you won’t find, however, is a public transportation system that’s kept up with the city’s increasingly mobile population. Professor Obafemi Davies of Fourah Bay College (FBC) writes: “It is not easy for my students to access the university, especially when it rains. Freetown lacks proper public transport and infrastructure.” During the rainy season of May through November in Sierra Leone,[1] many Freetown students who live far from school are at the mercy of the flooded streets and often miss class.

To tackle this problem, we worked with Professor Davies and his students to operationalize four key sectors of data relevant to Freetown: flooding data, poverty data, mobility data of supply and demand, and complementing sectors such as health, education, and tourism. By following how people move with call detailed records (CDR), we can see where they’re going, what’s compelling their journeys, and how we can best serve the community. CDR data helped us to determine where the people of Freetown were commuting for their jobs. While a great variety of places emerged, many centralized around the Tower Hill area. CDR data allowed us also to compare the different mobility patterns in dry and rainy seasons and identify which areas were the most impacted by rain. 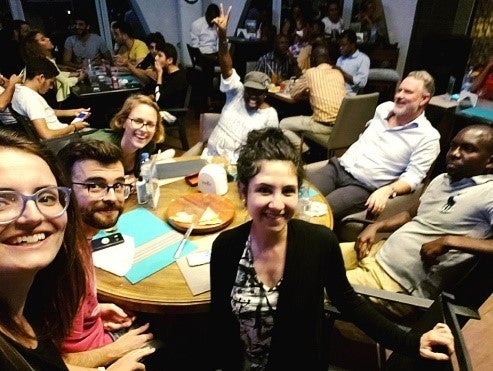 From there, we built on the Data Collaboratives Initiative to bring together Fourah Bay College (the only engineering university in Sierra Leone), and Where Is My Transport (a South African firm) to generate the first ever map of informal and formal buses. Furthermore, the same group of students assembled data from the World Bank-developed app “Road Lab” to track and report flooding conditions on the road. By the end, Davies was proud to report that “I can see we are building the future of Sierra Leone through this project, because we are involving the students that now understand public transport data standards, and understand better the concepts of resilient infrastructure. I see we are going in the right direction. We need to use more data for decision making. And we need more people locally that can collect and analyze the data to make the decisions.”

So, what made our project so successful? Probably the most important ingredient in our success was involving local citizens in the project design. By empowering the community to build consensus, they learned much about employing data for development, and doing so sustainably. Students from Fourah Bay College gained valuable hands-on experience in collecting transit data which included data from the mini-buses, the Sierra Leone Road Transport Corporation, and ferry routes. They also participated in survey training, mapped the flooding of road infrastructure using Road Lab, and generated the first map of public transport in Greater Freetown that is even being used to define future project investments!

"I see we are going in the right direction. We need to use more data for decision making. And we need more people locally that can collect and analyze the data to make the decisions.”

Building on this successful partnership, one of our key goals will be to continue empowering local communities like the students from FBC. This project promoted a deep collaboration with local academic institutions and the Directorate of Science, Technology, and Innovation within the government of Sierra Leone, which plans to host a hackathon for FBC students and local developers to use Big Data to create apps to solve future local issues in project areas. Read more about how the data from Freetown was incorporated in this hackathon.

This work is funded by the Global Facility for Disaster Reduction and Recovery (GFDRR) – Resilience to Climate Change.