Hundreds of open data experts and enthusiasts from more than 50 countries are expected at the second International Open Government Data Conference (IOGDC) —a look at the impact and promise of open data in cities, countries and institutions around the world. 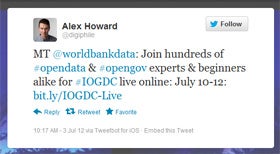 The conference is hosted by the World Bank Open Data Initiative,Data.gov, and the Open Development Technology Alliance. All plenaries, keynotes, and sessions will be webcast and a series of hosts will be live blogging on World Bank Live. See the full conference schedule and follow #IOGDC on Twitter or on the live blog below:

Open data is data that is freely available and re-usable without restriction – technical or legal. Governments around the world have begun to open their data in a bid to be more transparent and accountable, to stimulate innovation and efficiency, and to drive the private sector. The move to make US government weather data freely available, for example, is thought to have generated billions of dollars in economic value and this year, the UK has followed suit.

In 2010, the World Bank Group became the first multilateral institution to open its data. Today, the Bank aids open data and open government efforts in a number of countries. Countries that have received support from the Bank, including Moldova and Kenya, will share both their experiences and their challenges with peers from the open data community and discover the best ways to build demand for government data.

Tune in from Tuesday July 10 to Thursday July 11 to World Bank Live where you can watch and participate in the International Open Government Data Conference 2012 online.