The ICP blog series explores ideas and issues under the International Comparison Program umbrella – including innovations in price and data collection, discussions on purpose and methodology, as well the use of purchasing power parities in the growing world of development data. Authors from across the globe, whether ICP practitioners or researchers making use of ICP data, are encouraged to submit relevant blogs for consideration to [email protected].

Earlier this summer, new data published by the World Bank showed that the Gross Domestic Product (GDP) of India had recently surpassed that of France, and that it was on track to overtake the UK economy too. Many news outlets jumped upon this new ranking of India’s economy, now sixth from top. But most media articles did not mention that the World Bank’s other measure, which compares GDP across countries using purchasing power parities (PPPs), has placed India ahead of both France and the UK for the last 25 years.

July’s data release showed national GDPs quoted in US dollars using market exchange rates (commonly abbreviated to “Xr”). But these exchange rates do not take into account the relative cost of goods and services in a country. For the purpose of estimating the relative cost of living and sizes of the world economies, the International Comparison Program (ICP) compares the prices of common goods and services across the globe, applies appropriate expenditure weights, and calculates purchasing power parities for nearly 200 countries across six regions. 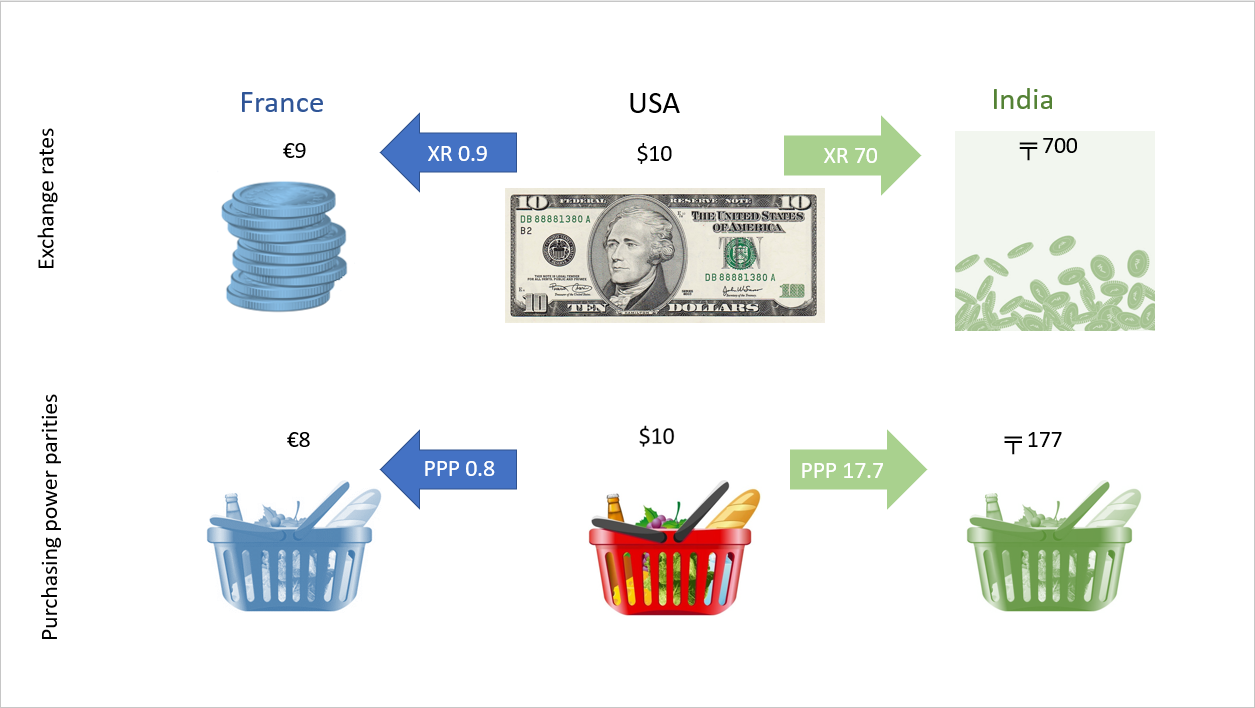 A basket of goods and services in India, as measured through the ICP, is relatively cheap compared to the same basket in the USA and France. Someone exchanging $10 for rupees at a bank or money exchange in India would be able to buy around four baskets locally with her ╤ 700, while her ten-dollar bill would buy just one such basket in the USA.

Thus, when we compare India’s whole economy with that of France by calculating GDP in PPP international dollars, rather than using US dollars from market exchange rates, we find that India’s economy surpassed that of France in 1993 and is now well over three times as large. And we also find that India's economy is the third largest in the world under PPP terms, higher than Japan, Germany and the United Kingdom, all of which it lags in exchange rate terms.

That's interesting and thanks for bringing to the centre stage. Although the data tells us India's PPP exceeded France in 1993, the reality on the ground is that, a sizeable population cannot afford that basket you talk about. So I was wondering why?
The answer probably lies in the uneven distribution of wealth. Can you somehow bring an additional dimension to this chart, whereby we look at income distribution versus PPP? Or does world bank already have such an index?

It is because labour costs are so low that purchasing power is so high. This cost advantage will remain for perhaps 50 more years, combining capital investment growth (and hence a rising middle class) with very low labour costs. Automation of most service sectors and the creation of cheap, AI driven manufacturing will greatly benefit the country, as the rising middle class will be able to become global artisans like never before. Labour costs will continue to remain low, making India highly attractive for traditional labour-intensive manufacturing, as China's cost advantage disappears.
Thus the country will be able to produce both capital-intensive and labour-intensive goods in a way that even China has not achieved. India can be the 17th Century China of today. Provided it restrains its self-destructive impulses, mainly: promotion of vegetarianism, excessive population growth, infrastructure short-spending, and appeasement to radical minorities.
Also, as growth is largely driven by native (not necessarily national) investment and local consumption, rather than exports and FDI, Indian growth should be far more sustainable and anti-fragile than China's export-driven model. This latter model is, of course, quite susceptible to external political influences, as we see today.