This blog is the last in a series of nine blogs on commodity market developments, elaborating on themes discussed in the October 2021 edition of the World Bank’s Commodity Markets Outlook.

The World Bank’s Metals and Minerals Price Index stabilized toward the end of 2021 but remains more than 35 percent higher than a year earlier. Metal prices have been supported throughout the year by supply curtailments due to energy shortages and shipping bottlenecks as well as strong demand. The exception is iron ore, where a rebound of exports from key producers (including Australia and Brazil) and cuts of steel production by China pushed prices back to pre-pandemic levels. Iron ore prices were down 55 percent during the period June to November 2021 compared to a year earlier. Following a nearly 50 percent increase in 2021, the Metals and Minerals Price Index is projected to fall slightly in 2022 as supply bottlenecks ease further. The impacts of the Omicron wave and the Evergrande crisis, however, pose significant downside price risks in the short term. Over the longer term, the global energy transition away from fossil fuels is expected to increase demand for some metals, particularly aluminum, copper, nickel, and tin.

Moderate growth in global demand. Metal demand grew nearly 4 percent in 2021Q3 (y/y). The growth has been driven by the EU and North America, following a rebound in industrial activity. (The global Manufacturing PMI rose to 54.3 in October, indicating economic expansion.)  China’s metal demand (world’s largest metal consumer), however, grew very little in 2021Q3, owing to environmental policies to control pollution and the Evergrande real estate crisis. Overall, demand for some metals has been constrained (e.g., lead, due to microchip shortages impacting auto production) while for others it has strengthened (e.g., tin, due to growth in electronics and photovoltaic installations).

Supply is driven by input costs and shortages. Higher input costs and energy shortages have been the key drivers of metal supply. Coal (a key input to smelting) nearly doubled in price between June and October, though it retreated recently. Lockdowns also affected several metal markets.  For example, lockdowns interrupted mine production of tin in Indonesia and Malaysia. Zinc was affected by power shortages in key producing regions, including China and Europe, and supply disruptions in Mexico. In the region of Yunnan, China, power shortages limited zinc mining and smelting. Power shortages in China and COVID-related restrictions in New Caledonia limited nickel production. Higher input costs, and energy supply shortages affected the aluminum market as well, including China (which introduced “dual policies” aimed at limiting energy intensity and overall energy consumption), India (where aluminum companies faced energy shortages due to limited coal supplies), and in Brazil (where output was curtailed by weak hydroelectric power generation). 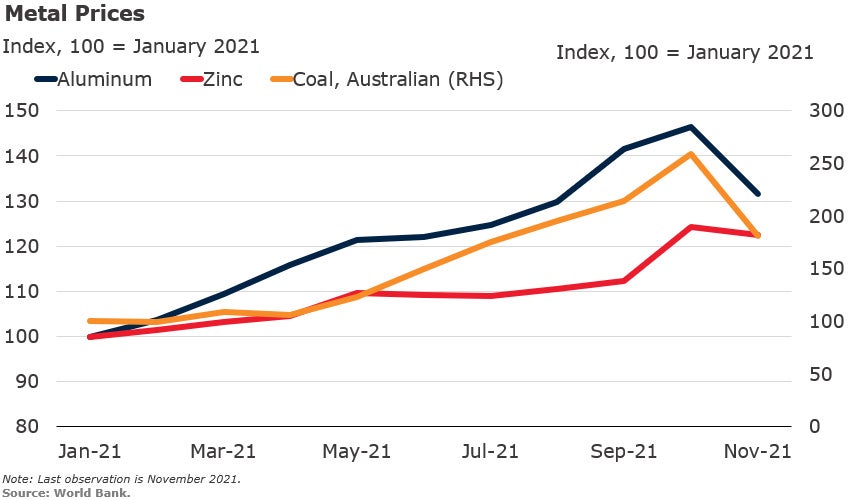