Not all data are created equal: why the adoption of international data standards pays off

Yet, international standards and methodologies do matter. They provide the foundation for key statistical indicators—such as growth rates, employment status, and industry classifications—and ensure cross-country comparability of such indicators.

As part of the 2021 World Development Report: Data for Better Lives, the World Bank recently launched the Statistical Performance Indicators (SPI). The SPI assesses the performance of countries’ statistical system across five pillars: (1) data use, (2) data services, (3) data products, (4) data sources, and (5) data infrastructure. In this blog post, we explore pillar 5, which includes indicators on countries’ use of internationally accepted and recommended methodologies for data standardization. Pillar 5 of the SPI has five sub-components or dimensions and the adoption of international standards and methods falls under dimension 5.2. Much of the data for dimension 5.2 comes from the IMF.

The data show that the adoption of international standards and methods is highly uneven. For example, only half of all countries use the most recent system of national accounts and more than one-third of countries have a national accounts base year older than ten years. An outdated system of national accounts and base year can lead to incomplete coverage of economic sectors and underestimation of the size of an economy, as seen in the large GDP revisions for Ghana and Nigeria. But also outdated base years for consumer price indices (41% of countries) and the non-adherence to international frameworks in the compilation of government finance statistics (45%) and employment data (62%) can paint a wrong picture of the state of an economy and fiscal spaces.

The adoption of international standards and methods is highly uneven 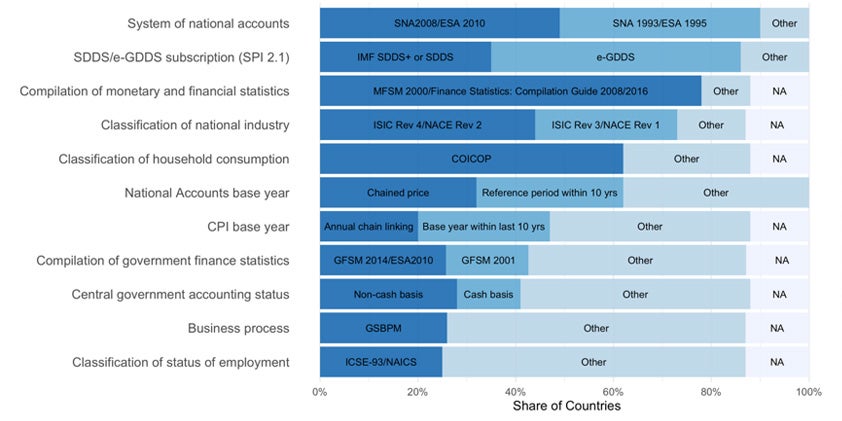 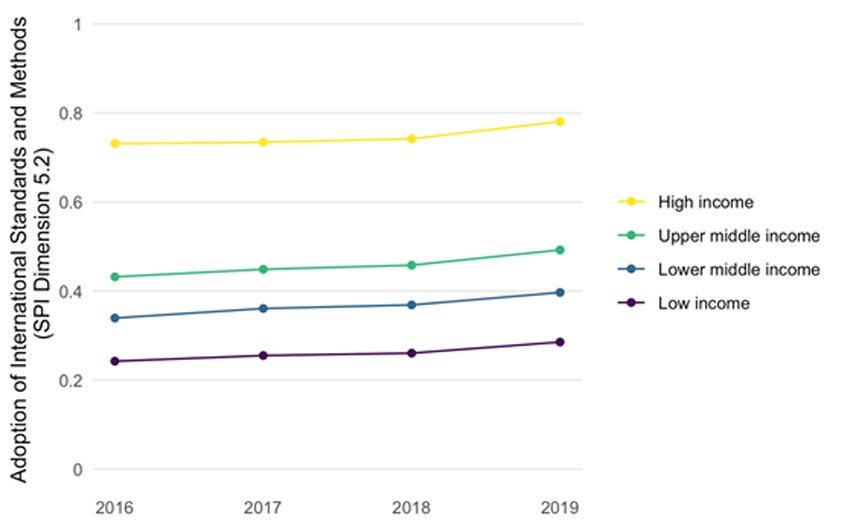 The World Development Report 2021: Data for Better Lives illustrates many ways in which data standards can promote development, from greater accountability to better policymaking to increased business opportunities. Yet, investing in data standards can also be costly especially if faced with capacity constraints and a lack of funding.

The good news is that adopting international data standards may at least partly pay for itself through lower borrowing costs. Previous research suggests that if data on macroeconomic fundamentals are more reliable, international investors may ask for lower yields on dollar-denominated government bonds. Consistent with this hypothesis, we find that the adoption of international standards (as measured by SPI dimension 5.2) is negatively correlated with a lower 10-year government bond spread —a measure of the additional cost of borrowing money for a country relative to the U.S. 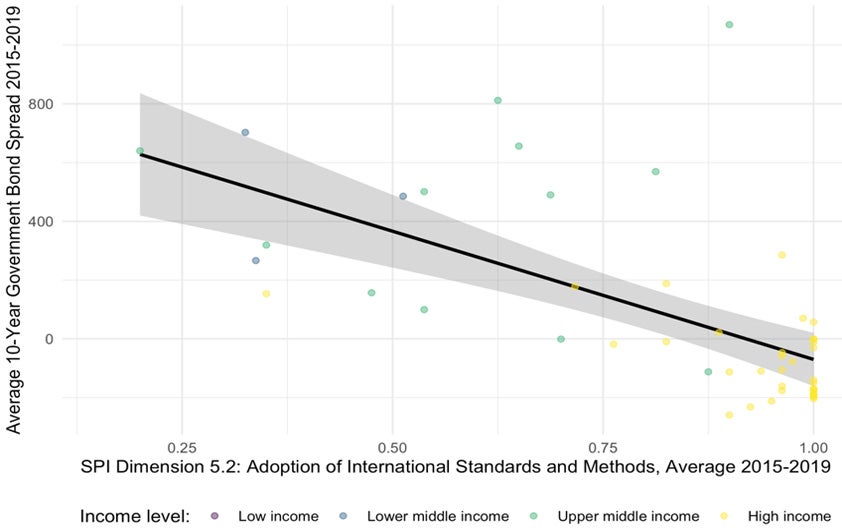 The negative association also holds when controlling for other determinants of government bond spreads. Following an earlier study, we control for various “pull” factors of international capital such as GDP per capita, GDP growth, external debt, and inflation. We also control for global “push” factors such as the US federal interest rate and the VIX index (which is a measure of the stock market’s expectation of volatility) through the inclusion of year fixed effects.

We find that conditional on the macroeconomic fundamentals and changes in the global market environment, an increase in the adoption of international standards from the 25th percentile to the 75th percentile of SPI Dimension 5.2 is correlated with a decrease in government bond spreads by 169 basis points (see this GitHub repository for full results and replication material). This would be the equivalent of reducing your mortgage interest rate from 4% to 2.31%, for instance. The association is statistically significant and while not identifying a causal effect, it is consistent with the realization of large savings through the adoption of international standards.

So while systems of national accounts, base years, and industry classifications are typically not what keep most people up at night, perhaps they deserve more attention from data producers. Not only are such standards crucial to get an accurate image of the state of the economy, government finances and more, the strong correlation between the adoption of international standards and external borrowing cost suggest that the adoption of standards may, at least partly, pay for itself. We are are going to adhere to world standard when it comes to data methodology.