This blog is the sixth in a series of 11 blogs on commodity market developments, elaborating on themes discussed in the October 2022 edition of the World Bank’s Commodity Markets Outlook.

Crude oil prices have fallen by about one-third from their June highs but remain extremely volatile. Slowing global growth and concerns about a global recession have thus far outweighed worries about insufficient oil supply. Oil prices are forecast to average $92/bbl in 2023 and $80/bbl in 2024, down from a projected $100/bbl in 2022. However, prices will remain well above their recent five-year average of $60/bbl. The forecast is highly uncertain, with a variety of factors that could materially alter global supply or demand. For supply, these include EU sanctions on Russia and the G7 oil price cap, OPEC+ production capacity, the outlook for U.S. shale oil, and the use and refilling of strategic oil inventories. For demand, they include a potential global recession and the easing of COVID-19 restrictions in China. This blog investigates these risks.

Russian oil production is expected to fall in 2023 as additional sanctions kick in. Russia’s total oil production has seen a modest decline of about 0.3 mb/d since its invasion of Ukraine, much less than the 2.5-3.0 mb/d decline anticipated in the International Energy Agency’s April 2022 Oil Market Report.  Production has been supported by the rerouting of exports from G7 economies to other countries, including China, India, and Türkiye. Russia’s exports are likely to decline in 2023, however, because of additional sanctions. The EU has banned most of its imports of Russian crude oil (starting December 5, 2022) and will ban imports of oil products from February 2023. Rerouting these exports may prove more difficult for Russia, especially for pipeline exports which have few alternative transport options. In addition to this ban, the UK and EU banned the provision of maritime services, particularly insurance, to ships carrying Russian crude oil, unless they abide by the G7 oil price cap. As the cap was set at a fairly high level of $60/bbl which was above the price of Urals (the Russian benchmark) at the time, countries importing oil from Russia will already comply with the cap and will therefore be able to access UK and EU insurance services.

OPEC+ production will remain subject to quotas in 2023. OPEC+ members agreed to cut their production target by 2 million barrels per day starting in November 2022 and lasting through end-2023.  The actual reduction in production in November was much smaller than that (around 0.5 mb/d), largely because many members were already producing well below their target due to operational issues and capacity constraints. Indeed, even after the reduction in the production target, the group’s actual production was still short by 1.7mb/d. Spare production among the group remains low by historical standards, at around 3.5 mb/d or 3.5 percent of global oil demand.

The outlook for crude oil production in the U.S. may be too optimistic. About half of global oil production growth in 2023 is expected to come from the United States, where total production is forecast to increase by about 1 mb/d. However, there is a risk that production growth disappoints.  Production increases in 2022 have been heavily supported by a drawdown of drilled but uncompleted wells, which has reduced the number of uncompleted wells available to support production going forward. In addition, producers have been focusing on returning cash to shareholders amid investor pressure, and they are also facing rising input costs and shortages of key components which will constrain future drilling. 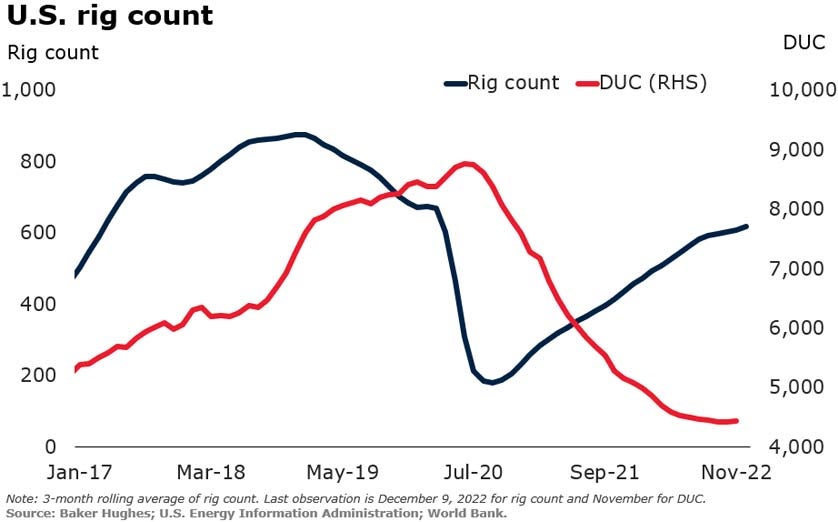 Strategic oil inventories are near a 40-year low in the U.S. The United States and other OECD countries have released large amounts of oil from their strategic reserves, equal to about 1mb/d since March.  These releases have sharply reduced the level of strategic reserves—for example, the U.S. Strategic Petroleum Reserve (SPR) is currently at its lowest level since 1984—reducing available buffers in the event of future disruptions to supply. Conversely, the U.S. administration has announced it intends to start to refill the SPR at a price of about $70/bbl, potentially putting a floor under prices.

Global economic growth forecasts have been revised down for 2023. Global growth for 2023, which has been revised downward repeatedly since January, is expected to further slow in 2023 due to synchronous policy tightening, worsening financial conditions, and declining confidence.  The prospect of a global recession could lead to much weaker oil consumption.