A year ago we announced the release of the results from the 2017 cycle of the International Comparison Program (ICP). The purchasing power parities (PPPs), size of economies, and measures of price levels and per-capita expenditures produced by ICP 2017 provided a comprehensive view of the global economy prior to the emergence of the COVID-19 pandemic. Since then, multiple socioeconomic indicators have been updated using these new PPPs and several analyses and datasets drawing on ICP data have been published. 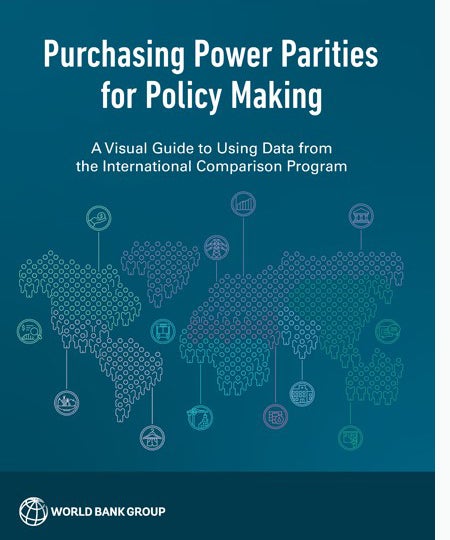 “Purchasing Power Parities for Policy Making: a Visual Guide to Using Data from the International Comparison Program”, published recently, showcases the wide use of PPPs and ICP data, and the critical role they play in development analyses.  It is available as a PDF file for download and as a web-based publication, both of which allow the reader to explore interactive data visualizations and download the underlying data.

The guide contains myriad applications of PPPs and ICP results by many organizations including Eurostat; the Food and Agriculture Organization; the International Energy Agency; the International Labour Organization; the International Monetary Fund; the International Telecommunication Union; the Organisation for Economic Co-operation and Development; the United Nations Development Program; the United Nations Educational, Scientific and Cultural Organization; the World Economic Forum; the World Health Organization; as well as the World Bank amongst others. These applications are illustrated through seventy data visualizations of PPP-based indicators and analyses, together with descriptions of the policy areas in which they are used, and are organized under eleven chapters arranged by topic. These cover the size of the economy and price levels; poverty and inequality; trade and competitiveness; labor costs, wages, and social safety nets; food and nutrition; health; education; energy and climate; infrastructure; human development; and administrative uses. The visualizations include PPP-based indicators used in eight of the Sustainable Development Goals (SDGs), such as energy efficiency, universal health access, and monitoring the share of people living below the international poverty lines.

The guide also illustrates how PPP-based indicators allow policy makers and analysts to measure the effectiveness of domestic policies, make comparisons with other economies, and track development and progress over time.  For example, the Global Competitiveness Index produced by the World Economic Forum uses PPP-based GDP as an input into assessing the market size of economies around the globe.

PPP-based indicators also allow comparisons of expenditures made in specific sectors, such as health, education, and infrastructure.

Furthermore, data collected by the ICP, such as the prices of goods and services and the wages of public sector employees, inform analyses resulting in global datasets on food security and public sector compensation.

The guide also highlights the detailed data published by the ICP for the different expenditure components that make up the GDP. For example, PPPs are calculated for health goods and services, and allow users to compare price levels and expenditures on the health sector across countries and regions.

The use of ICP methodology to estimate PPPs for regions and localities below the national level is highlighted in the guide. These subnational PPPs allow analyses of the differences in the cost of living across provinces and states, and across urban and rural areas, and examples from the UK, the USA, and Vietnam are included.

Purchasing Power Parities for Policy Making: a visual guide to using data from the International Comparison Program also includes an overview of how the conceptual framework and methodology behind the estimation of PPPs dictates when they should, and should not, be used. It also includes a technical note detailing the data available from the ICP via the World Bank’s DataBank, and the program’s underlying concepts, definitions, and classifications. More information on PPPs and the ICP is available on the ICP website and through the ICP blog series, while the report Purchasing Power Parities and the Size of World Economies: Results from the 2017 International Comparison Program presents an overview and results from the most recent ICP cycle.

The guide is produced in collaboration with the ICP partner agencies: the African Development Bank; the Asian Development Bank; the Interstate Statistical Committee of the Commonwealth of Independent States; the Statistical Office of the European Union; the International Monetary Fund; the Organisation for Economic Co-operation and Development; the United Nations Economic Commission for Latin America and the Caribbean; and the United Nations Economic and Social Commission for Western Asia.

We hope that this new publication inspires its audience to think more about how PPPs and data from the ICP can help in their analyses, including tracking the progress of the world’s economies and their citizens as they emerge from the global COVID-19 pandemic.