Poverty is a complex and multifaceted phenomenon. When poor people are asked in participatory studies what makes them feel poor, they indicate a wide range of deprivations: not having enough to eat, having inadequate housing material, being sick, having limited or no formal education, having no work, and living in unsafe neighborhoods. Multidimensional poverty measures, such as the Global MPI produced by UNDP and OPHI, attempt to reflect this complex experience and inform policies to address it. Following the recommendations of the Atkinson’s commission on global poverty, the World Bank added its own multidimensional poverty measure (MPM) in 2018 to complement its commonly reported poverty measures that focus more narrowly on monetary poverty (more details on the measure are available here).

The World Bank’s MPM seeks to understand poverty beyond its monetary dimensions and includes measures of access to education and basic infrastructure along with the monetary headcount ratio at the US$1.90 line. The MPM is at least as high as or higher than the monetary poverty headcount in a country, to reflect the additional role of nonmonetary dimensions in increasing multidimensional poverty. The Poverty and Shared Prosperity 2020 report shows that over a third of those experiencing multidimensional poverty are not captured by the monetary headcount ratio, in line with the findings of the previous edition of the report. The lack of comparable data for a large set of countries with information on education and access to basic infrastructure, makes it difficult to analyze trends over time, so we concentrated on analyzing multidimensional poverty in the latest year.

Figure 2 illustrates this point further by plotting the correlation between monetary poverty and multidimensional poverty; the distance from the 45-degree line highlights in which economies the difference between the two measures is greatest (for the detailed country-level estimates, see Table 1D.2 in PSPR 2020). This difference might be as large as 34 percentage points (Niger) or relatively low as in Tanzania (8.4 percentage points). Although Niger and Tanzania have similar monetary poverty rates (45.4% and 49.4%, respectively), the multidimensional poverty headcount is considerably higher in Niger (79.3% vs. 57.8%), suggesting that nonmonetary deprivations play a greater role in Niger. Taking a different perspective, Angola and Uganda show similar levels of multidimensional poverty, although Uganda has lower levels of monetary poverty (41.5% vs. 51.8% for Angola). Some economies might have low monetary poverty headcounts, but a large share of their populations might be deprived in the other dimensions, for example, Mauritania (6% vs. 46%) or Guatemala (9% vs. 22%).

There exist stark overlaps in the forms of deprivation afflicting households in Sub-Saharan Africa. Figure 3 shows that 21% of the population in Sub-Saharan Africa is deprived in all three dimensions, a figure that equates to about 40% of the region’s multidimensionally poor.  This overlap is lower in other regions; for example, 11% of the multidimensionally poor in Latin America and the Caribbean are deprived in all three dimensions, compared with 22% in the Middle East and North Africa. This illustrates the many aspects of poverty in Sub-Saharan Africa—more than 90% of the monetary poor are also deprived in basic infrastructure, education or both.

Figure 3 Share of the population living in households deprived in multiple dimensions, selected regions circa 2017 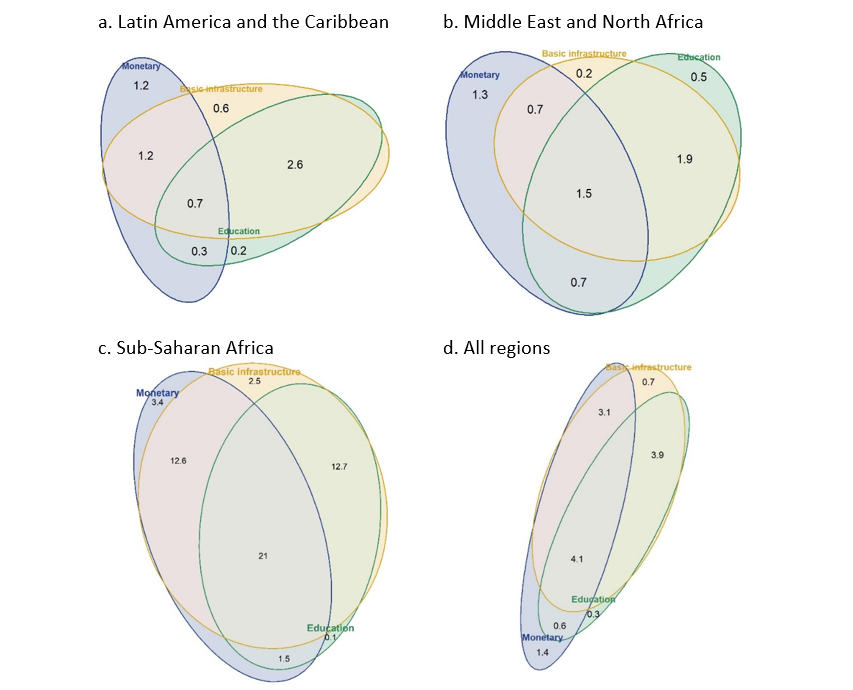 Source: Poverty and Shared Prosperity Report 2020, based on data from the Global Monitoring Database (GMD)
Note: The Venn diagrams show the overlaps in different dimensions of the multidimensional poverty measure at the household level. It shows the share of households (in percent) deprived in all indicators and in each combination of the monetary, education, and basic infrastructure dimensions. Only Latin America and the Caribbean, the Middle East and North Africa, and Sub-Saharan Africa, as well as the total for all regions, are shown because these regions have sufficient population coverage.

Consultant at The World Bank Democracy, education and market economy are the right way to eradicate poverty!

Yes am interested in research around poverty/inequality in Africa.