Working hard and not being counted? Evidence from Sub-Saharan Africa on redefining employment

In 2013, the 19th International Conference of Labour Statisticians (ICLS) profoundly changed international labor statistics standards: One important change (among many) is that going forward, only work done for the purpose of pay or profit is considered employment. Producing outputs only or mainly intended for one’s own or family consumption, common among smallholder farmers in many developing countries, no longer counts towards employment or labor force participation. Instead, this type of activity is being reported under a separate indicator of “own-use production work”. The revised standards, which are gradually being rolled out in national surveys and thus finding their way into official statistics, change the status of many smallholder farmers from “employed” to “not employed” but “engaged in own use production work", with significant consequences for official labor statistics. In a recent paper, we analyze what this means for measuring employment in Sub-Saharan Africa, based on household surveys from Ghana, Malawi, and Nigeria.

How do the revised standards affect the employment status of smallholder farmers? A farmer’s employment status now depends upon what they say they plan to do with their farm production (mainly or only for own/family use versus mainly or only for sale). We find large variation, even within rural Africa, in the share of farmers classified as employed under the revised standard. In parts of Malawi and Nigeria, 70 to 80 percent of smallholder farmers produce only or mainly for their own consumption at the beginning of the agricultural season, compared to only about 25 percent of farmers in parts of Ghana. By the revised standards, their farm work is no longer considered employment.

Timing is everything, especially when it comes to data collection for labor statistics.  In Ghana, Malawi, and Nigeria, many farmers mainly work on subsistence crops at the beginning of the main growing season, while at the end of the season, their farm work shifts towards livestock rearing and the growing of crops that are intended mainly for sale. This means that end-of-season surveys result in more farmers being classified as employed compared to start-of-season surveys, amplifying seasonal fluctuations in rural employment measures (based on the standard 7-day recall period). In addition to changes in activities, farmers’ self-reported intended use of output for a given crop also changes over time.

Figure 1: Fraction of farmers classified as employed according to the 19th ICLS standards 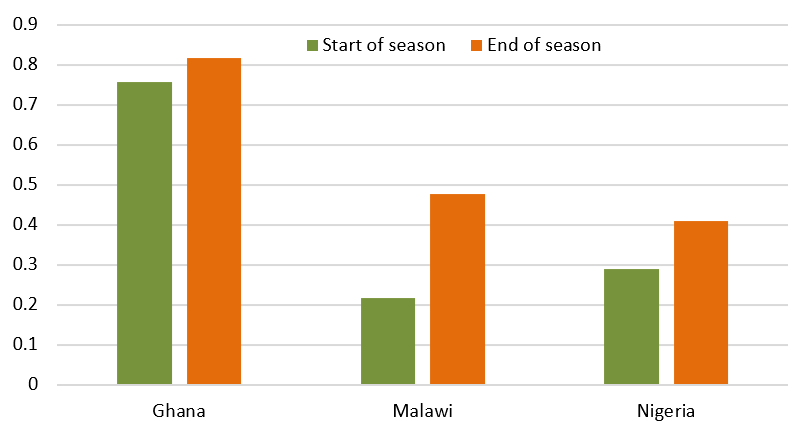 Source: Authors’ calculations based on Ghana 2015 and Malawi 2016/17 Agricultural Household Surveys and Nigeria 2015/16 General Household Survey. The data for Ghana and Malawi are not nationally representative. Employment is measured using a 7-day recall period, which is standard practice in labor statistics.

When comparing male and female farmers, we see that in contexts where gender differences are statistically significant, women are less likely than men to report producing only or mainly for sale. In Malawi, the country for which we have the most granular data, this is mainly driven by gender differences in labor allocation across crops and livestock. As a result, women’s farm work is less often classified as employment—and more often classified as own use production work—compared to men’s farm work under the new definition.

Our analysis also points out challenges in how the revised standards are implemented in household surveys—especially in cases where farmers produce various crops and grow different animals, some intended for sale and others intended for family consumption. An emerging approach to operationalize the 19th ICLS standards in household and labor force surveys is to ask farmers to report the intended use of output from all their agricultural activities combined (see here for the most up-to-date guidance by the International Labour Organization). This approach, however, requires farmers to perform complex mental calculations, as they are asked to provide a combined (aggregate) response across different farm products (e.g. maize, beans, and chicken). Guidance to survey interviewers is important to enhance consistency in reporting across respondents, as well as clear questionnaires.

To round up our analysis, we explore how the revised standards affect aggregate employment statistics in Malawi and Nigeria—some of the first countries in Sub-Saharan Africa to collect nationally representative multitopic household survey data, which can apply the new definition. We find that the implementation of the revised standards, all else being equal, leads to a considerable reduction in employment-to-population ratios, especially in rural areas. 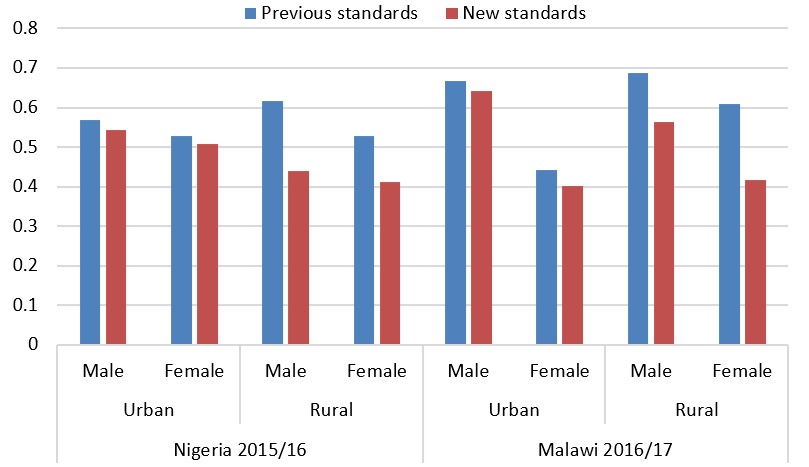 The 19th ICLS standards also alter the sectoral composition of employment. Since many smallholder farmers in Africa are also engaged in non-agricultural activities (e.g., brick-making, construction works, or operating a small shop), they may be classified as employed in industry or services under the 19th ICLS standards, even though they devote most of their time to farming for own consumption. Looking at the share of agricultural employment in total employment according to the revised standards, we see a rural population that appears to be far less reliant on agriculture.  As a result, the official labor statistics following the 19th ICLS standards suggest a society much further along the process of structural change than what was indicated by the previous labor statistics standards. 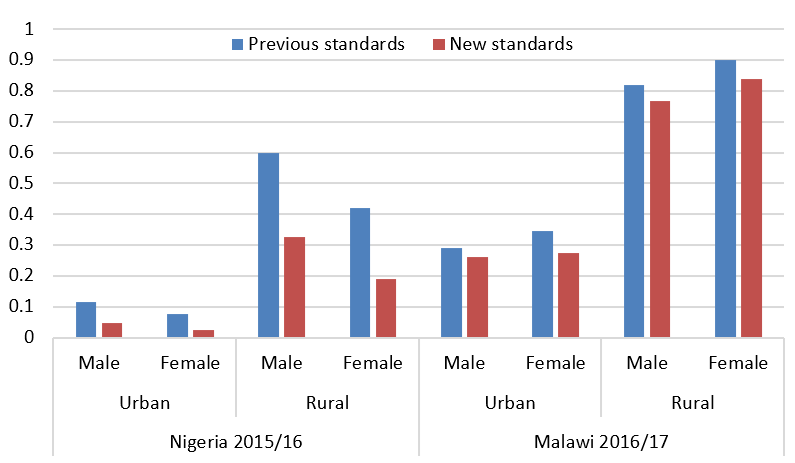 Finally, caution is necessary when combining such new employment statistics with national accounts statistics to derive macro estimates of labor productivity.  While producing (farm) output for own consumption is no longer considered employment under the 19th ICLS standards, such output still counts towards GDP according to the present (2008) System of National Accounts (SNA). Consider, for example, the standard approach of dividing the total agricultural value added by the number of people employed in agriculture to estimate agricultural labor productivity. Under the 19th ICLS standards, the numerator of output remains unchanged, while many smallholder farmers potentially disappear from the denominator. So, unless parallel labor statistics consistent with the old definition continue to be published, the revised standards could easily result in significant overestimations of agricultural labor productivity. And because the introduction of the 19th ICLS standards (again, all else being equal) also leads to a decline in employment overall (though proportionately smaller than the decline in agricultural employment), total labor productivity is also prone to overestimation.

From these various changes, it’s clear that employment statistics in Sub-Saharan Africa (and other regions with a prevalence of farming for own consumption) look radically different with the 19th ICLS standards in place.  Researchers and policymakers ought to be aware that major changes in official employment and labor force indicators will emerge as these new statistical definitions are put into practice.