I was struck by an interview featured in a recent show of CBC Radio One's The Current. Nani Gautam, a live-in caregiver in Canada, was asked how important was the money she sent home to her family in Nepal, especially after the earthquake. “As important as breathing for life,” said Nani, who sends home at least one-third of her earnings every month, month-after-month, for the last five years. Her remittances are even more important now, after the earthquake. But she has encountered difficulty sending money to Nepal because banks were closed.

In the immediate aftermath of a natural disaster, it is normal for us to think of supplying food, shelter, medicine to the affected people. Although less obvious, access to cash and remittance services is perhaps equally important. After the earthquake, overseas Nepalese like Nani were the first to think of sending help to their families and friends back home. Yet, they experienced difficulties.

Over two million Nepalese are working overseas, most of them in Saudi Arabia, Qatar and the UAE. An equal number of Nepalese are also working in India, a large number of them as seasonal migrants. Remittances from India are grossly under-recorded, but the recorded amount is believed to more than make up for the bilateral trade deficit Nepal has vis-à-vis India, thus helping Nepal maintain its exchange rate link with the Indian rupee.

International remittances reached $5.9 billion in 2014, compared to less than $1 billion of ODA and less than $500 million of international tourism receipts. As the Nepalese economy has floundered in recent decades, the dependence of the people on remittances has grown almost exponentially (figure 1). The ratio of remittances to GDP was about 30 percent last year. I expect this ratio to increase significantly this year.

Figure 1: At nearly $6 billion, remittances provide a lifeline to the Nepalese people 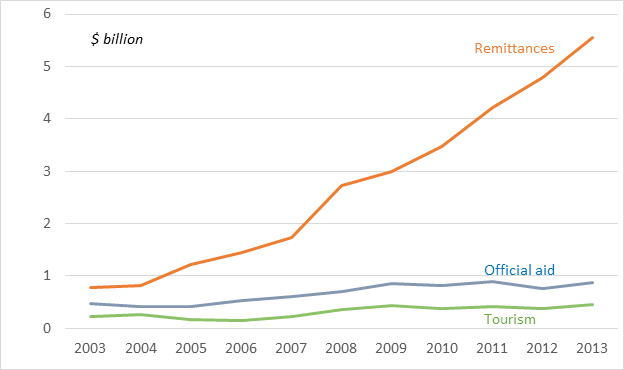 The absence of over two million able-bodied Nepalese is surely being felt during this time of shock and recovery from the tremors. The emotional pain to the family must be enormous. From a financial viewpoint, however, migration has provided an insurance to the Nepalese people in the form of keeping the migrants safe and able in the foreign countries, enabling them to send significant financial help at this time of need.

It is heartening to see that several money transmitters – including UAE Exchange, Ria, MoneyGram, Western Union, Lulu International Exchange, Xpress Money, Modern Exchange, GCC Exchange, ANZ – have waived the fees on remittances to Nepal. Normally Nepal receives about $500 million per month. I’d think remittances in the month of May would be at least double that amount. On an average transaction fee of 4-5 percent, the amount of remittance fee waived is probably $40-50 million. The waiver of remittance fee, thus, is worth a lot more than a few tens of thousands of relief grants announced by a number of money transmitters. This is a noble gesture worth our gratitude and thanks. It’d be great if the fee waiver is extended beyond May, to as long as financially feasible, to facilitate personal remittances from Nepalese migrant workers as well as contributions from the people all over the world.

The reconstruction efforts in the quake-affected areas in Nepal will draw in migrant workers from other parts of Nepal as well as from the countries in the region, especially Bangladesh and India. At the same time, the need for resources for reconstruction will almost certainly cause more outward migration from Nepal. Perhaps the best form of help that other countries can offer, more than any charitable grants, is to open the door a bit wider for the Nepalese migrant workers.
Remittances to help rebuild Nepal BBC
Topics
Disaster Risk Management
Countries
Nepal
Regions
South Asia

THANK you, Ria, for extending the fee waiver for Nepal to the end of June https://twitter.com/RiaFinancialUK/status/600940567477002240. You are making a great gift from you to the people of Nepal! I hope other firms join the effort.
Dilip