Internal migration, the movement of people within a country, results in a more efficient allocation of human resources to sectors and regions where they are better utilized. In India, as in most countries, there are generally no restrictions on internal movement. The number of internal migrants in India was 450 million as per the most recent 2011 census. This is an increase of 45% over the 309 million recorded in 2001. This far exceeds the population growth rate of 18% across 2001-2011. Internal migrants as percentage of population increased from 30% in 2001 to 37% in 2011. 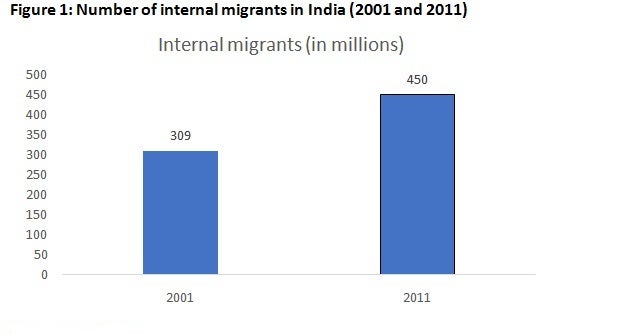 Despite the significant increase in internal migration recorded in 2011, the nature of movement remains relatively unchanged since 2001. Bulk of the movement (62%) is within the same district. Another 26% is between districts within the same state. Only 12% of movement is inter-state.

Inter-state migrants represent only 4% of population in India in 2011, a rate almost unchanged since 2001. For those moving in less than 5 years, this value was even smaller at around 1% for both censuses. This was significantly less than the five-year interval inter-state migration rate of almost 10% in the US and nearly 5% in China (despite the internal movement controls there known as the hukou system). According to a research paper, India has the lowest rate of internal migration in a sample of 80 countries.

With the introduction of Aadhar-based benefits,the issue of benefits portability may be addressed. More detailed analysis, using customized surveys (rather than relying on census or other general data), is required. This could lead to policy options to enhance rates of inter-state migration to boost optimization of human resources in the spatial dimension and thereby reduce poverty and boost shared prosperity. Dear Sir, Some see migration as opportunity to sustain livelihood but it deprives migrants of their fundamental rights to basic amenities.
Please share if study done on How does it affect economy of the family.
How does it affect physical, mental, socio-economic condition. I am sure Nutrition and Food Security is major challenge.
Regards.