According to the National Academic of Science of the United States, climate change is linked to more intense and frequent disasters. For developing countries, especially those facing fragility, conflict and violence, the economic impact of climate change can be unbearably large. For example, the loss and damage in the 2016/17 season to Somalia economy exceeded $3.25 billion, amounting to 50 percent of annual GDP.  The resources of migrants and diaspora members, including remittances, can play a significant role in building resilience in fragile countries.This blog highlights the role of remittances in disaster risk management in the case of Somalia. 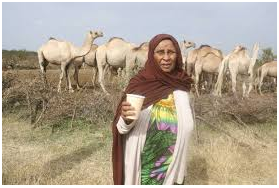 In Somalia, remittances from friends and relatives abroad helped reduce the distress caused by the drought in 2016. The 2017 second-wave Somalia High-Frequency Survey shows that households that received remittances were able to deal with emergency needs and cope with the drought better than households with no access to remittances. The remittances received by IDPs living outside of settlements could be in part due to transfers received to survive the drought. Remittances are not a substitute for government response or humanitarian aid in the case of droughts. Migrants’ remittances help to smooth household consumption and act as a form of insurance for Somalian households facing shocks to their income and livelihood due to drought, and famine

To respond to disasters, the diaspora provided collective remittances, goods and services, technical information on coping with disasters. Some members returned to help with recovery and reconstruction. Diaspora members also organized events to collect contributions.

There is a need for building a risk-management mechanism dealing with ex-ante management of income generation (income smoothing) which will enable households to anticipate and prepare for the effects of a shock in a timely manner. For example, a livestock insurance scheme could prevent drought-induced livestock losses of pastoralists. The potential product could enable pastoralists to use the cash received from the payout of the insurance to purchase fodder, water, veterinary drugs and other services that would help keep their livestock alive during the drought period. Diaspora members could pay for the premium of the livestock insurance.

Countries affected by fragility, conflict and violence can tap the diaspora to support disaster risk reduction initiatives. Migrants contribute to building resilience through remittances since households receiving remittances are better prepared to respond to shocks. Creating financial products and market instruments for the diaspora to invest in building resilience such as micro-credit, livestock insurance, diaspora bonds could support countries to manage the high costs from disaster shocks, strengthen preparedness and facilitate earlier action. Countries need to shift from more immediate humanitarian initiatives towards longer-term development interventions.