“Is it true there are lots of us [in the US] and I don’t have to hide?” - Fred, Uganda (living in Kenya Kakuma Refugee Camp)

After its summer recess, the Kyrgyz parliament is set to examine a repressive law against sexual minorities, often described as a copycat of the Russian “gay propaganda” law. This would be the fourth country this year to approve new legislation limiting the rights of sexual minorities. 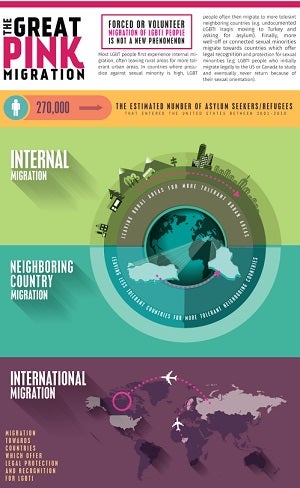 Although demographic information on LGBT asylum seekers is scarce, organizations such as ORAM—the Organization for Refuge, Asylum and Migration— report a surge of LGBT asylum seekers. The US, Canada, Australia and the European Union have made it easier for sexual minorities to apply for refugee status. In the EU, LGBT asylum seekers cannot legally be turned away with the instruction to 'conceal their orientation' or 'exercise restraint' anymore.

“My dream is to one day go back to my country and to be accepted. […]I can contribute a lot to develop this world…” – Albert, DR Congo (living in South Africa)

The relationship between sexuality and the decision to migrate is a severely understudied aspect of migration often assumed to be exclusively driven by income gaps between origin and destination countries. This results in the extreme vulnerability and specific challenges of LGBT migrants to be mostly ignored.

Cut off from support networks in their home countries, LGBT migrants face identical situations in their host countries where they cannot rely on the diaspora networks. Commercial sex work is not an uncommon way to settle: a 2001 UK study showed that among Central and East European gay migrants living in London, 15.4% had been paid for sex. Similarly, Scott Long recently mentioned that Ugandan refugees in Kenya resorted to sex work and were ultimately arrested. LGBT migrants also often face incapacitating mental health issues due to traumatic events across their lifespan.

The migration process itself creates opportunities for homophobic-specific forms of discrimination and violation. The UN Rapporteur on Torture found the treatment of LGBT immigrants in U.S. detention facilities in violation of the Convention Against Torture (see Méndez, 2013). A November 2013 Center for American Progress (CAP) report found that LGBT held in immigration detention facilities are 15 times more likely to be sexually assaulted. Victor Mukasa, a Ugandan activist, recently described how 58 LGBT Ugandan who fled to Kenya ended up experiencing violence and discrimination in the Kakuma refugee camp. Similarly, a short film titled “Gay and Lesbian Refugees in South Africa: 'We Thought You’d Accept Us” shows the painful experience of LGBT refugees from across Africa.

“NGOs take care of asylum seekers but do not pay attention to the LGBT people who have to hide their identities.” Subhi, Syria (living in Turkey)

The conjunction of rapid advances in LGBT rights in many countries, and of a wave of backlash against anti-gay laws and policies in other countries could lead to increasing Pink migration throughout the next decade. This would have consequences on the way transit and host countries ready themselves to welcome this unexpected and specific wave. ORAM just launched the LGBT Refugee Project Portal showcasing approaches that enhance the protection of LGBT migrants and UNHCR is working on a resettlement assessment tool. A contribution from the World Bank could be to assess the amplitude of the phenomenon, its specific challenges and identify good practice in ensuring safer migration for LGBT people.