We just launched the latest edition of the Migration and Development Brief and an accompanying Press Release.

Remittances to developing countries decreased by 2.4 percent to an estimated $429 billion in 2016. This is the second consecutive year that remittances have declined. Such a trend has not been seen in the last 30 years. Even during the global financial crisis, remittances contracted only during 2009, bouncing back in the following year.

Low oil prices and weak economic growth in the Gulf Cooperation Council (GCC) countries and the Russian Federation are taking a toll on remittance flows to South Asia and Central Asia, while weak growth in Europe has reduced flows to North Africa and Sub-Saharan Africa.

The decline in remittances, when valued in U.S. dollars, was made worse by a weaker euro, British pound and Russian ruble against the U.S. dollar.

This year, however, should see a recovery in remittances, in keeping with the improved outlook for the global economy. We expect remittances to developing countries to grow by an estimated 3.3 percent to $444 billion in 2017.

Unfortunately, there is also no respite for international migrants from the high cost of remitting money. The global average cost of sending $200 remained flat at 7.45 percent in the first quarter of 2017, which is significantly higher than the Sustainable Development Goal (SDG) target of 3 percent. Sub-Saharan Africa, with an average cost of 9.8 percent, remains the highest-cost region. In some cases, such as in South Africa or in the Pacific Islands, remittances costs can be as high as 12 or even 17 percent.

The Brief also notes that several high-income countries that are host to many migrants are considering taxation of outward remittances, in part to raise revenue, and in part to discourage undocumented migrants. However, taxes on remittances are difficult to administer and likely to drive the flows underground.

In a special feature, the Brief notes the absence of a formal definition of the Global Compact on Migration, and advances a working definition of “an internationally negotiated framework for governments and international organizations to harness the benefits of migration while navigating its challenges.” Based on an analysis of fundamental drivers and impacts of migration, it identifies nine thematic priorities for the Global Compact. It calls for a stocktaking of existing conventions and regional agreements addressing migration, to develop a normative framework or guidelines for governments and international organizations. Noting that the global migration architecture is fragmented, the Brief calls on the global community to systematically map the current institutional framework and clarify the missions of key organizations.

Do read the latest Brief for more on the latest trends in migration, remittances and other related topics, including the latest data on refugees. 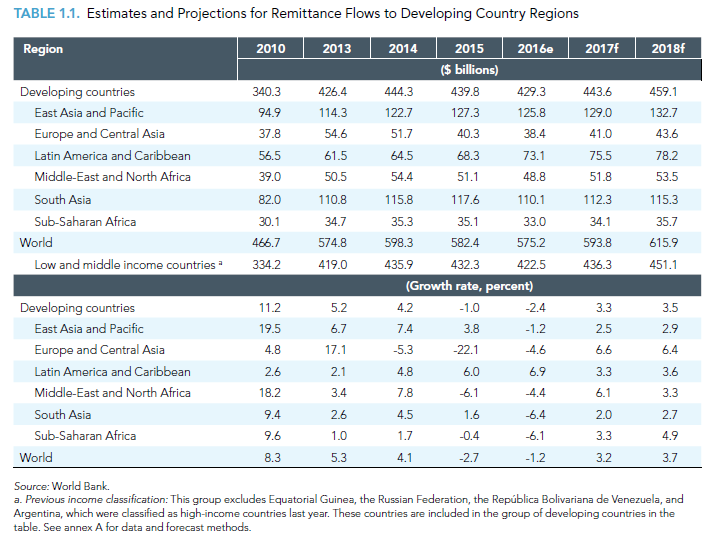